Jitney review: An engaging and busy ensemble piece fleshed out by characterful performance 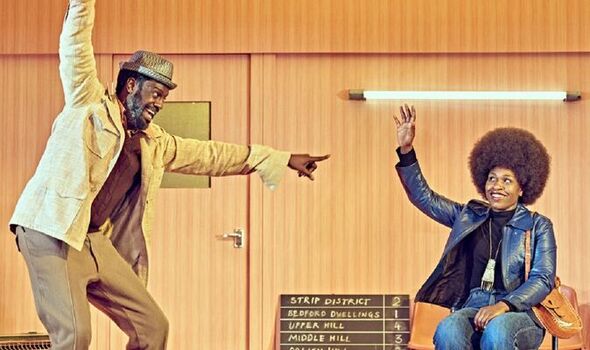 Written in 1979, Jitney was the first of the cycle, and director Tinuke Craig’s commendable production shakes the dust from a play that hasn’t been seen in London for over 20 years. Set in 1970s’ Pittsburgh, it explores the lives of men who work for an unlicensed taxi firm run by Becker (Wil Johnson), a kindly, fairminded man whose tolerance of his motley crew is often stretched to breaking point.

Among his charges is hot-headed veteran driver Turnbo (Sule Rimi) who interferes in everyone’s business, ambitious Youngblood (Solomon Israel) who is working hard to buy a house for his family, and Fielding (Tony Marshall) whose fondness for a nip from his hip flask proves troublesome.

Every character is well defined even if it takes time to adjust to a variety of accents.

The boxed-in rundown office set is surrounded by a screen showing footage of Pittsburgh’s shabby Hill District, adding to a sense of imminent economic collapse.

Becker’s long-established, if illegal, business is under threat from the authorities who want to develop the area as part of its urban renewal programme. Everyone has something to lose including livelihood, self-respect and the society of their fellow drivers.

Fractured narratives are loosely threaded throughout – Becker’s son Booster (nicely played by understudy Blair Gyabaah on opening night) tries to reconcile with his father following a 20-year prison sentence for murder, and Youngblood is forced to defend his innocent car rides with his wife’s sister. But plotting is neither the play’s strongest suit nor its point.

Wilson simply places us in the company of a loose fraternity of black men trying to do their best in a world in which they are invisible.

While it lacks the power of later plays such as Fences and Joe Turner’s Come And Gone, it is an engaging and busy ensemble piece fleshed out by characterful performances.