Welcome to My Favorite Scene! In this series, IndieWire speaks to actors behind a few of our favorite Emmy-nominated television performances about their personal-best onscreen moment and how it came together.

For “Dopesick” star Kaitlyn Dever, her favorite scene from the harrowing Hulu drama showing the full history and scope of America’s opioid crisis, which earned her her first Emmy nomination for Outstanding Supporting Actress in a Limited Series, was a fateful phone call between her character Betsy, a coal miner hooked on Oxycontin after a bad back injury, and Dr. Fennix (Michael Keaton), the doctor who prescribed the drug to her, and later became addicted to it himself.

“It’s such a complex scene, these two characters that have gone through so much singularly, then coming together and having this conversation,” said Dever of the moment in Episode 7 written and directed by showrunner Danny Strong. “There’s a lot of layers to it, and a lot that isn’t said on the phone either. But what these two characters are going through is so powerful.”

This interview has been edited for length and clarity.

IndieWire: How did you prepare for the scene? Both on an emotional level, and then I’m always curious about how phone call scenes are shot?

Kaitlyn Dever: It’s a very big moment for both characters in the show, [so] I wanted to make sure that I was able to actually talk to Michael when he shot his side of it, and then he reciprocated that when I went and shot my side of it. On past jobs I’ve done you have someone else read the dialogue off camera and it just completely changes the way the scene goes. To be able to actually hear Michael’s voice as Dr. Fennix on the other side of the phone when I was shooting that scene was so important to how that scene weighs on you, and how it felt for me.

Same thing for when I had my phone call with Cleopatra Coleman who plays Grace in the show, I think it makes a huge difference when you can actually connect just by certain pauses or certain breaths. It was just a matter of thinking and meditating on what Betsy as a character had already gone through. And I had already shot a lot of my material by that point. So I had already actually lived through these scenes. That was a really helpful part in preparing for the scene and what I was going to be thinking about. And then the fact that we had shot [all] of Dr. Fennix and Betsy’s scenes, and I hadn’t seen Michael in a while, helped as well because in the show Betsy hadn’t seen Dr. Fennix in a very long time. And so it did feel very real when we actually ended up doing it, which was really, really powerful.

How was it having Danny directing this episode? Do you remember any notes he gave you?

What’s so great about Danny is that he really understands all sides of making film and TV. He’s been an actor himself, he’s an incredible writer, and he really just gets it. For that scene in particular, it was a big moment, but Danny made me feel so calm about it. I felt very much at ease when we were doing the scene. And I don’t know if we did it that much. We kept it really simple, which is what that scene deserved.

It was just all in his writing too. His writing is just absolutely brilliant, and all of it is there. That day, we kind of loosely blocked it out. It was an emotional day, too. It’s one of those things where, as an actor, I was almost trying not to get emotional, even though it wasn’t technically [written as] an emotional scene, but I felt that weight to it. And Danny was even emotional that day — and we only did it a couple of times. Again, we wanted to let it breathe and to let it live and be what it was meant to be, which is really an incredible feeling to have.

Do you think Betsy already feels defeated in the scene? Or rather hopeful? It seems like you played it in a way that is open to interpretation. Is that purposeful?

Right, well we are definitely getting a sense of just how exhausted she is, and how this person didn’t ever expect this to happen. She is a composite character of the millions of people that were and are affected by the opioid crisis. So she is someone that represents exactly that, someone who tried so hard to get away from this drug, and tried everything in her power to escape it. And that scene really shows just how resilient she is, how strong she is, how badly she wants to be away from it. But at the same time [she’s] been through so much already that she’s almost lost hope, but this phone call from Dr. Fennix allows for a little glimmer of hope.

That’s why I wanted to talk about this scene, because I think it does show what a powerful person she is, but also she is an example of someone that just literally wasn’t expecting this, talking to the person that prescribed her oxy in the first place. She has this understanding that it totally isn’t his fault, and I think that’s really beautiful. And [that] they tell each other that they love each other at the end of the phone call is so heartbreaking and powerful and beautiful all at once. And the fact that she doesn’t blame him for any of it is really special. 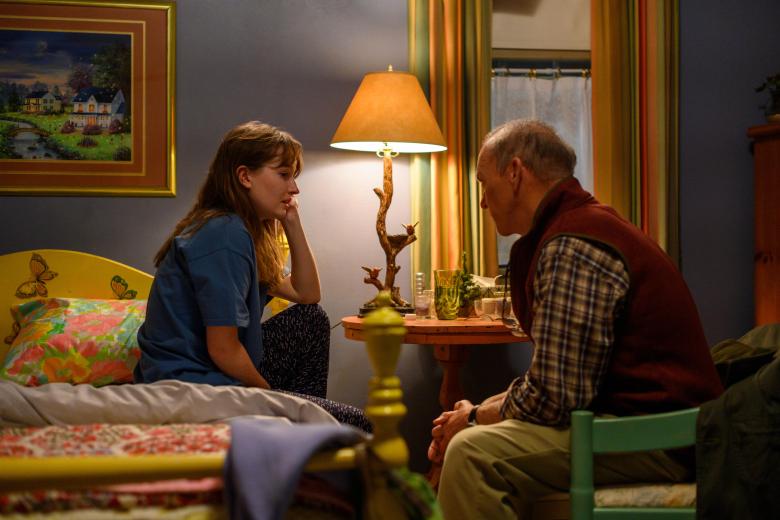 Was there any difficulty or work around establishing Betsy and Dr. Fennix’s relationship? Not many people are close enough to our doctors to say “I love you.”

Yeah, it wasn’t really hard at all, honestly. First of all, I look up to Michael Keaton, just as Kaitlyn, I think he’s such a legend. He is an icon in my eyes. So I already admired him before even meeting him, and there was honestly that layer beneath actually doing scenes and working with him and playing these two characters. That layer of love that I already had for him definitely fed into how the relationship plays out on screen. But again, Danny’s writing is so real and grounded and honest, and never feels false at any moment, so that definitely helped the relationship bloom in our scenes.

My first scene that I did with [Michael], it just felt so organic and so natural to feel close to this person. Because the way Danny so beautifully wrote it was that Dr. Fennix really does understand Betsy like no one else, and he really does see her for who she is, and that’s something that Betsy has always recognized, and that’s why she feels so comfortable to be open with him, and share parts of her that she doesn’t share with anybody else. It’s so sweet. But it definitely wasn’t hard to have that connection with Michael because everything that comes out of his mouth you just believe everything he says. Again, meeting this icon in your mind for the first time, [knowing] how much I looked up to him already, and thinking about doing your first scene with that person is nerve-wracking to think about. And he just made me feel so comfortable. The scene was the easiest thing ever. That was really amazing.

What did you think of “Dopesick” when it was finished? Did you watch it? Also, what feedback have you gotten from the general audience and people who may have gone through this?

Playing Betsy has been such an honor. It feels so good to be a part of something that I immediately connected to, and felt like I had to be a part of, that everybody else felt the same way about it. You really felt like everybody [on the show] was on the same mission, and that was to tell this story in a very honest way, and allow people to connect to it, and learn, and better understand what is going on in our world, and how the opioid crisis is affecting millions and millions of people. Making the show was truly like one of the greatest experiences I’ve ever had making something, because we all knew we were coming together to make something really important and meaningful, but also everybody was so nice.

I can’t tell you how nice our crew was. It just blew my mind almost every day, and they just immediately felt like my family showing up to work, which is a rare feeling to have. So making it was such a good standout experience, that having that, I was just so excited for that show to come out. And then when it came out, to see the amount of impact it’s had on people has been really moving. And we even had people that were a part of our crew coming up to me after shooting a scene one day basically thanking me for bringing someone like Betsy to life. Danny had the same thing happen to him. It really was a constant reminder of why we made the show in the first place. It’s been so exciting to see that the show has definitely had some impact on people. I watched it all in one day when it came out. What do you now look for in a project? This is your third show to win a Peabody, so your taste is pretty immaculate. What’s next?

I think that it really is just a gut feeling, and following my intuition. It’s pretty clear as soon as I read something. On all of the projects in my life that have won a Peabody, I remember distinctly, there was a very specific feeling I had when I read “Justified” for the first time, and when I read “Unbelievable” for the first time, and then “Dopesick,” there’s a real, immediate, sort of like a full body physical and emotional reaction that makes me just be so desperate to want to be a part of those kinds of projects. I want to continue to look for that, chase that feeling, and seek out the projects that I think will be impactful in some sort of way. Because that’s the best combination of something on a job that I get to do, where I get to do what I love, but also be a part of something that will move the needle forward, or start a conversation in some sort of way.

“Dopesick” is available to stream on Hulu. For updates on IndieWire’s coverage throughout Phase 2 of Emmy season, click here to sign up for our awards season and TV newsletters, as well as breaking news alerts.