It has been 15 years since Gossip Girl first hit our screens, giving viewers a glimpse inside the fictional world of the elite, taking us all into the salacious, slick and wildly twisted Upper East Side and a group of students at a wealthy private school.

The series was based on a hugely popular book series by Cecily von Ziegesar and adapted by the creators of the OC – it premiered on September 19, 2007, introducing us all to the popular high-schoolers at Constance Billard- St Jude’s, including Blair Waldorf (Leighton Meester), Serena van der Woodsen (Blake Lively), Nate Archibald (Chace Crawford) and Chuck Bass (Ed Westwick).

However, it was Zuzanna Szadkowski who almost stole the show as the Waldorf’s trusty housekeeper, Dorota, who was on hand to help her teenage boss take on ridiculous schemes, listen to her rant and rave about the latest injustice, or just give her a not-so-subtle nudge in the right direction when the time called for it.

Speaking to Metro.co.uk ahead of the anniversary, she unpacked the glamorous world that they all belonged in, or clung to, the friendships that were formed behind the scenes and why the show is still so beloved today.

‘I knew the show was going to be popular because the book series was so popular. We had a feeling like that it might be well received as they had already had an audience built in,’ she told us. ‘It has definitely a longevity. I feel like it’s some kind of combination of heart and wit, there’s a bit of tongue in cheek. The world is so attractive and wonderful escapism, this fantastic Upper East Side, the fabulousness in the gorgeousness of the fashion. That doesn’t hurt. 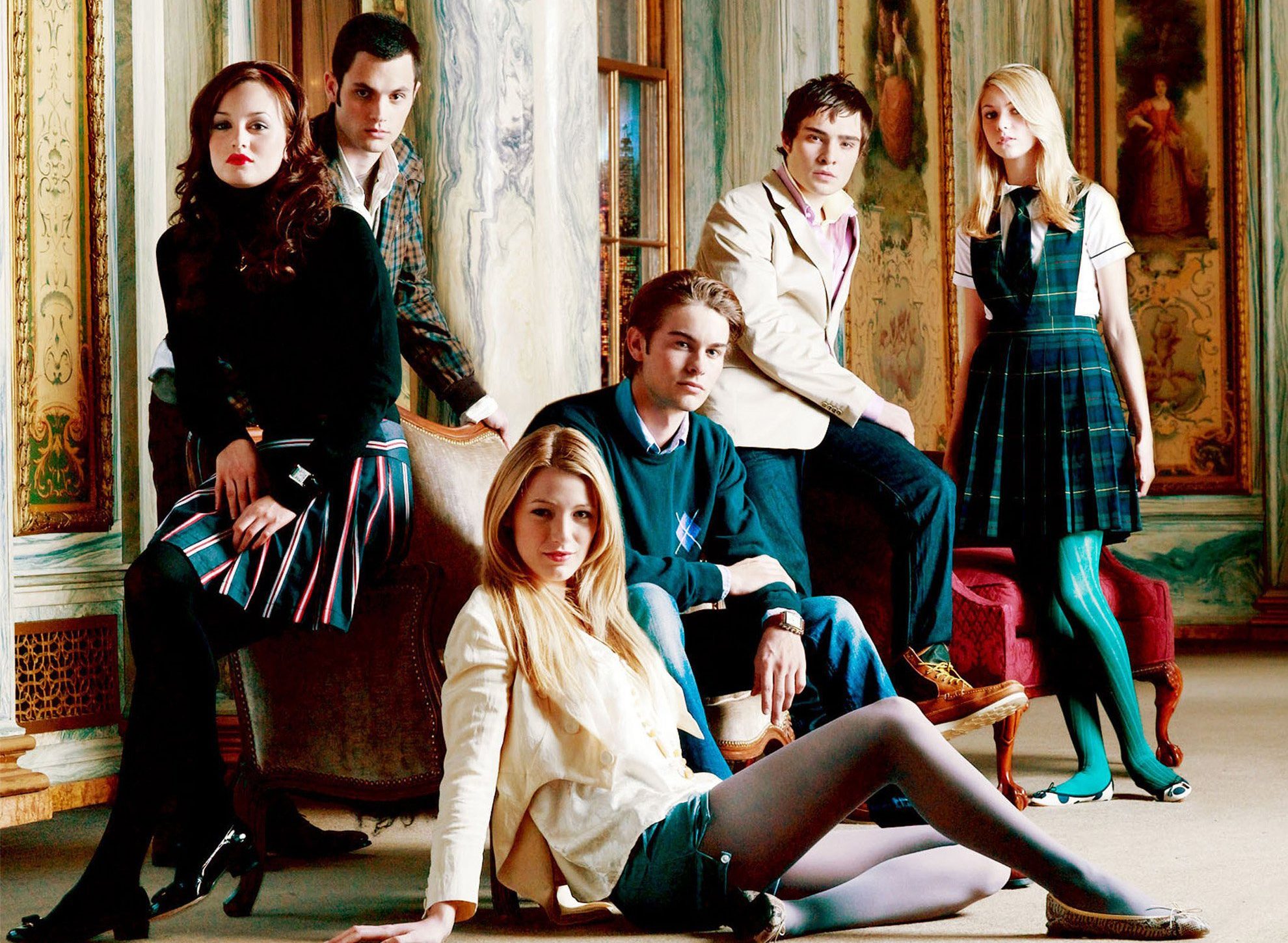 ‘What I think it really comes down to is these relationships between the characters – Miss Blair and Mr Chuck, the Chuck Blair phenomenon, it resonates with people. They get on Team Chuck / Blair and they want to see how it works out. The chemistry of the characters [make it] very watchable and very addictive.’

The character was originally slated to be someone ‘much older, in her 60s or something,’ Zuzanna recalled, before she managed to nail her audition and become the Dorota we all know and love today.

‘My very first scene that Dorota is in is a scene where Blair is talking about her troubles at school, and it appears that she’d be talking to her mom, and then the camera pans and you see that it’s the housekeeper,’ she continued. ‘I think it set up the relationship for Dorota and Blair right away, which was that Dorota was there for her and was an important part of her life. So the foundation was there and then it grew over time.

‘Dorota is a really earnest, 100% character. She loved Blair, took care of Blair, and had Blair’s best interests at heart, always. The idea that there’s this really solid figure in Blair’s life was important for her as a character. All the mischief that Blair got into, all the ups and downs with Chuck and Serena, and everything that happened in Blair’s life, she always had this anchor of Dorota that she could both rely on and abuse when she needed to express her demons.

‘The foundation was this deep love that the characters have for each other. There was a lot of heart in the show, and you see it in different relationships, in different ways. But the Dorota / Blair relationship was very pure, it was a relationship where Dorota had Blair’s best interests at heart no matter what. That was the number one driving intention for Dorota.’

The majority of Zuzanna’s scenes were with Leighton, due to the closeness of their characters, meaning the pair were able to carve out a long-standing friendship of their own, which was among her fondest takeaways from Gossip Girl.

Heaping praise on her co-star, she continued: ‘She’s a beautiful person. A really, really intelligent actor and a comedic genius. I learned a lot from her as an actor, and I also had a great friendship with her. She made me really feel at home on that set. I felt like part of the family because of her. That relationship between me and her as actors was so dear to me.’

There is no denying that the cast were shoved into the spotlight when the first season aired, with viewers instantly becoming obsessed with the goings on on the Upper East Side. Fans shipped certain characters together, while desperate for a glimpse into the lives of the actors who played them – sparking rumors of feuds and cast fall-outs behind the scenes.

However, Zuzanna insisted that the group was closer than the rumor mill wanted everyone to believe, and they managed to build ‘deep friendships’ amid their new-found fame.

‘I think it was very much like a tight-knit group of buddies. I call them the kids, the main core of the principal actors,’ she vowed. ‘I know that they all had deep friendships and really relied on each other. A lot of them were not from New York, so I think when they came together to work on the show, they really supported each other and had a great time together.

‘I was lucky to be included in that because, here I was playing an older character… They were all very welcoming to me and made me feel like part of the family. So every time I get to see them in the world, when I run into them, it’s really nice.

‘I have such a thrill when I turn on my television and I see some of the stars of Gossip Girl doing fantastic things now. Chace being on The Boys, Penn is on You, when I see these things, I’m happy to see them thriving and having huge careers. To me, it’s a nice feeling of touching home base. I try to stay in touch as much as I can, I’m definitely cheerleading all of them from the side.’

The series ended up running for six seasons before the final episode aired in December, 2012, when we all bid farewell to the gang as they went on to live their glamorous lives without the terrifying threat of a Gossip Girl alert to taunt them.

However, the show couldn’t end without wrapping a few mysteries up, namely the identity of GG themselves – with viewers convinced that it was anyone from Serena’s brother, Eric, to Dorota herself, before Dan was eventually unveiled as the one who had been sending out those highly-suspicious blasts.

The reveal ended up leaving more question marks than it solved as this didn’t quite match up with some of the scenes we had painstakingly obsessed over in the past.

Reflecting on the twist, Zuzanna admitted that no one on the cast was aware as they had all been given ‘redacted scripts’ – and, although she suspected that Dorota was Gossip Girl, she is relieved that the writers didn’t follow that notion.

‘I had no idea! Nobody knew who it was until we were literally shooting those very scenes, they were under wraps,’ she confessed. ‘All of our scripts were redacted with fully blacked out [pages] where you didn’t know what was going on at all. I didn’t know until the end.

‘A lot of people say it to me when they come up to me, “Dorota should’ve been Gossip Girl.” I thought so too but I’m glad that she wasn’t – just because, to me, it’s so integral to Dorota’s integrity and character that she is a true caretaker of Blair. If she had been Gossip Girl, it would have meant a lot of betrayal of Blair.

‘In retrospect, it would have really changed who Dorota is. I’m glad that she got to keep her earnest nature. As much as it would have been explosive and fun to have been Gossip Girl, it makes more sense in terms of how I see Dorota and her spirit. I’m glad she wasn’t Gossip Girl, but whether it makes sense that Dan was is super weird…

‘I was thrilled that, in the finale episode, when everybody is learning about Gossip Girl’s identity, there’s a moment where Mayor Bloomberg, the mayor of New York at the time, comes out of the elevator and says, “I thought it was Dorota!” I couldn’t believe the Mayor just said my character’s name on TV!’

After the series wrapped and the final credits rolled, Zuzanna made sure to take mementos from the stunning sets as a way of remembering her character, nabbing Dorota’s headband and the huge silver tea service tray that we would always see her carrying – a prop that the actress joked was her ‘nemesis’ as it was so heavy.

However, the finale wasn’t the last we saw of the housekeeper as she later made a cameo in the Gossip Girl reboot series, which aired last year on HBO Max – starring Jordan Alexander, Whitney Peak, Eli Brown and Evan Mock as the newest teenagers wreaking havoc on the Upper East Side.

‘It was so fun to be a part of that, to step back into that world and to see what was the same and what was different,’ Zuzanna added. ‘The fact that they asked us to do that was really cool. It’s such a special treat. There are so many people on the creative end, working on the crew are the same people that worked on the original, so it was like a reunion with a lot of people.

‘Revisiting the role of Dorota was so exciting. In that episode, I had a fancy dress on because I was a guest at a party, so I didn’t get to put Dorota’s iconic headband back on – that would have maybe made it a little easier. But I found that Dorota vibe right away and it was so fun to just step back into. It really took me back.

‘I’m a fan of the new show, I’ve been watching it, and to see how it works from the inside was also really cool. I’m so glad that the original still thrives and lives, and now this new version, I love the fact that it’s carrying the torch’.