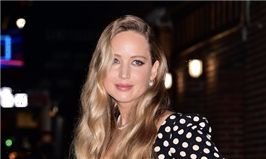 A few years ago, Jennifer Lawrence made a movie called Mother! in which she played a character known only as “Mother.”

This week, the Oscar winner spoke at length about mothers — having one and now being one — in an interview with Vogue tied to her new film Causeway. It’s the first project from Lawrence’s production company, Excellent Cadaver, and it premieres next week in Toronto.

“I have had a pretty consistent theme in all my movies since I was 18,” she told the magazine, before declining to provide specifics because the topic was “very personal.”

But Lawrence, never good at censoring herself, later expounded.

“Art more often than not is about one’s mother,” she told Vogue. “I hesitate to say that because I would hate for somebody to go back and watch my movies — or watch this movie in particular — and think that that is the way that I’m painting my mother. My mother is a wonderful person. But that doesn’t mean that there aren’t still things from my childhood that I’m working out.”

Taylor Swift Set For Toronto Film Festival Sit-Down Centered On 'All Too Well: The Short Film'

In Causeway, Lawrence plays an Afghanistan vet who returns to her hometown after a traumatic brain injury. Certainly, the film is about acute post-traumatic stress. But there are also hints of childhood trauma.

“Her untenable home, her inability to commit to one thing or another because of these internal injuries that are completely invisible but huge — I think I connected with that at that specific time in my life,” Lawrence revealed. “So much was going on with me at that time that I didn’t realize. Until I was back, pregnant, married, making it [the film]. And I was just like, Oh, this is a woman who is scared to commit.”

As a result, she said, “I get emotional every time I watch the movie.”

Speaking of the family-of-origin dynamics she sees behind her choice of films, Lawrence also wondered aloud, “I’m curious if, now that I’m older and I have a baby, I’ll finally break out of that.”

She and husband Cooke Maroney welcomed a boy, Cy — whom she revealed is named after Cy Twombly — in February.

“The morning after I gave birth, I felt like my whole life had started over. Like, now is Day One of my life. I just stared. I was just so in love. I also fell in love with all babies everywhere. Newborns are just so amazing. They’re these pink, swollen, fragile little survivors.”