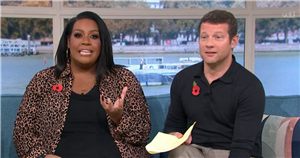 This Morning presenter Alison Hammond opened up about her chilling extra-terrestrial experience that made her “heart stop”.

During Friday’s visit to the ITV studios, the 47-year-old presenter welcomed viewers back to the award-winning daytime show with her co-host Dermot O’Leary.

One of the biggest stories on everyone’s lips was the recent rise in UFO sightings across the UK which has now sparked an investigation by the government.

Throughout the show the presenting duo discussed their own personal experiences with alien life, as the raven-haired beauty confessed how she was “convinced” she had spotted a UFO in the sky in her youth.

She explained: "When I was younger I thought I'd seen an alien spaceship, and genuinely, my heart stopped.

"It was the most frightened I'd ever been, I was convinced. But then I looked up and it was actually lasers, you know the lasers in the sky?

"Genuinely, honestly, I was watching it and I genuinely thought he was an alien, but it wasn't, it was lasers."

The loveable host then revealed how much she would love alien life to visit Earth as she joked that she would offer then a "hug and a bacon butty".

Fans soon took to Twitter to poke fun at the TV presenter online as many argued that aliens would never visit Earth.

One user penned: “Aliens would seriously need their heads examined to even think about joining us down here [laughing emoji, alien emoji] #ThisMorning.”

Another agreed: “Aliens are watching us like a bad celebrity series of Big Brother…. they aren’t interested. #ThisMorning.”

A third chimed in with: “If aliens did come here they would indeed be much more advanced and would no longer be mistreating their animals and eating them.