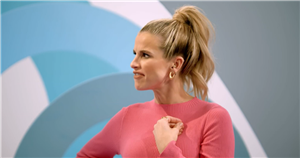 Vogue Williams made a "small boobs" confession during the first episode of her brand new E4 show.

The Irish TV presenter, 36, was front and centre at the premiere episode of Send Nudes: Body SOS on Wednesday night (August 31).

With Vogue on solo presenting duties, the show saw two people consider cosmetic surgery by viewing an avatar of their bodies before and after a hypothetical procedure.

With the help of 50 strangers, the participants then decide whether or not to go through with the suggested surgical options presented.

One of the participants was 31 year old Steph, who was considering having a breast lift and reduction.

Admitting to being unhappy with her EE breast size, the mother-of-three also said her large chest was 'saggy' and made her feel self-conscious.

As she comforted the tearful contestant, Vogue replied: "I think you look amazing but I love big boobs because I don't have big boobs."

Later in the show, Vogue made yet another boob confession.

The Bear Grylls: Mission Survive winner – who was pregnant with her third child Otto while the show was being filmed – shared her belief that one of her breasts was bigger than the other.

Vogue added: "Mine are kind of asymmetrical. Ahh jeez. Yep, it's definitely [the left one]."

At the end of the episode, Steph revealed whether she would stick with her current breasts, opt for a smaller E cup or an even smaller C cup.

She later revealed that she had a undergone a breast lift and reduction procedure in Turkey for "around £2000".

Steph said: "I am very happy with them but they need a lot of care and TLC. There is still a lot of scarring, still very painful, but onwards and upwards with my new boobs."