Debbie Reynolds' CA estate back on the market for $2.85M

If those walls could talk! Debbie Reynolds and Carrie Fisher’s beloved California central coast estate is back on the market for $2.85million

Debbie Reynolds and Carrie Fisher’s central coast estate is back on the market for $2.85million.

The 44-acre estate called Freedom Farms resides off North Ryan Road in Creston, California – north of Los Angeles – and has been in her son Todd Fisher’s sole possession since their deaths in 2016.

Described as a ‘tranquil retreat,’ the home features a rustic feel with a lot of exposed wood, deep colors, and lots of hillsides nearby.

Despite the more humble features scattered in the bones of the house, it still features many Hollywood must-haves, such as a private screening room, a recording studio where Journey has recorded, and a personal gym.

The seven-bed, seven-and-a-half-bath home was built in 1991 and was the ‘site of hundreds of gatherings, sing-alongs and served as a tranquil retreat for Hollywood’s elite.’

The main house is 7,800 square feet and features custom tile and woodwork. The two other buildings on the property create a combined 17,000 square feet of storage and a sound stage that the Singin in the Rain star used to film on.

The living room features high ceilings, deep wood paneling, a large fireplace, and a grand piano – which the family and many famous singers have used over the decades.

‘We were always a musical family,’ Todd told the San Francisco Gate. ‘So at some point during every holiday, at every gathering, someone would sit down and start going. Of course, Carrie was the harshest critic.’

A unique feature in the kitchen is the dark green booth, an industrial-style stove, and the difference shade of wood featured throughout the space.

The sound stage is filled with artifacts from Debbie’s and her husband Eddie Fisher – who famously went on to marry Elizabeth Taylor – and Carrie’s careers.

There’s also a barn, a lake, and hot springs located on the infamous estate and has agricultural and farming potential. 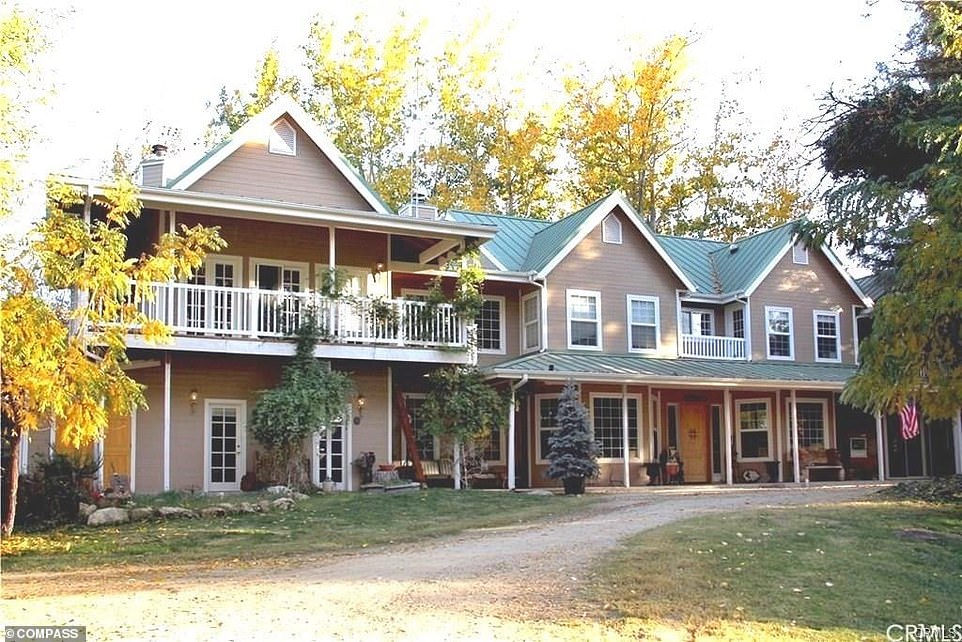 Debbie Reynolds and Carrie Fisher’s central coast estate is back on the market for $2.85million. The main house (pictured) is 7,800 square feet and features custom tile and woodwork 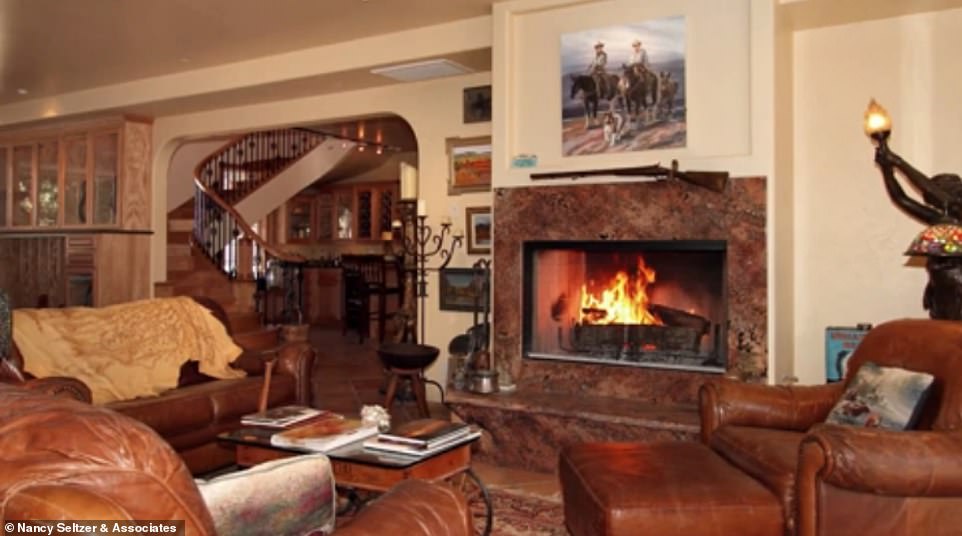 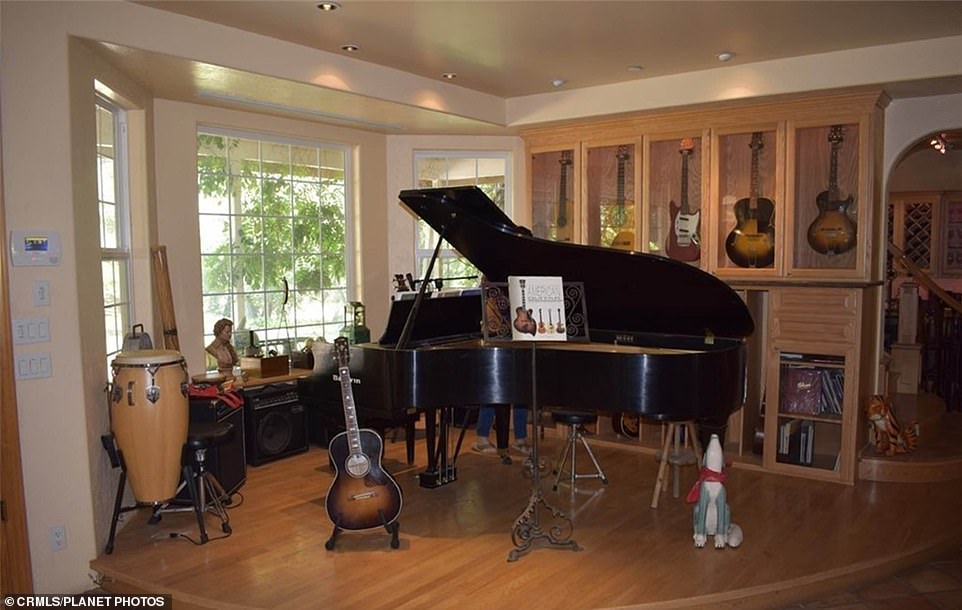 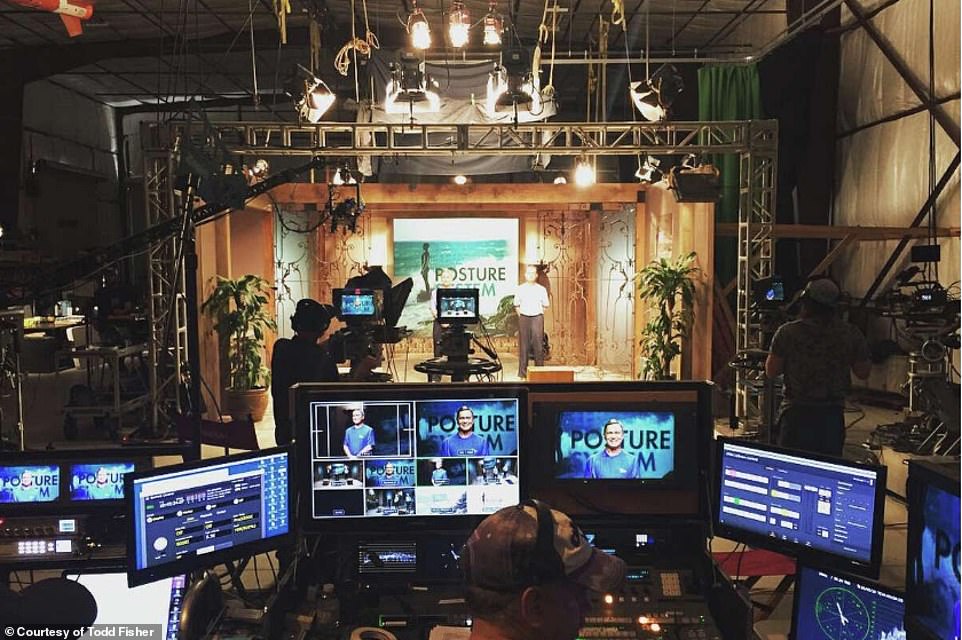 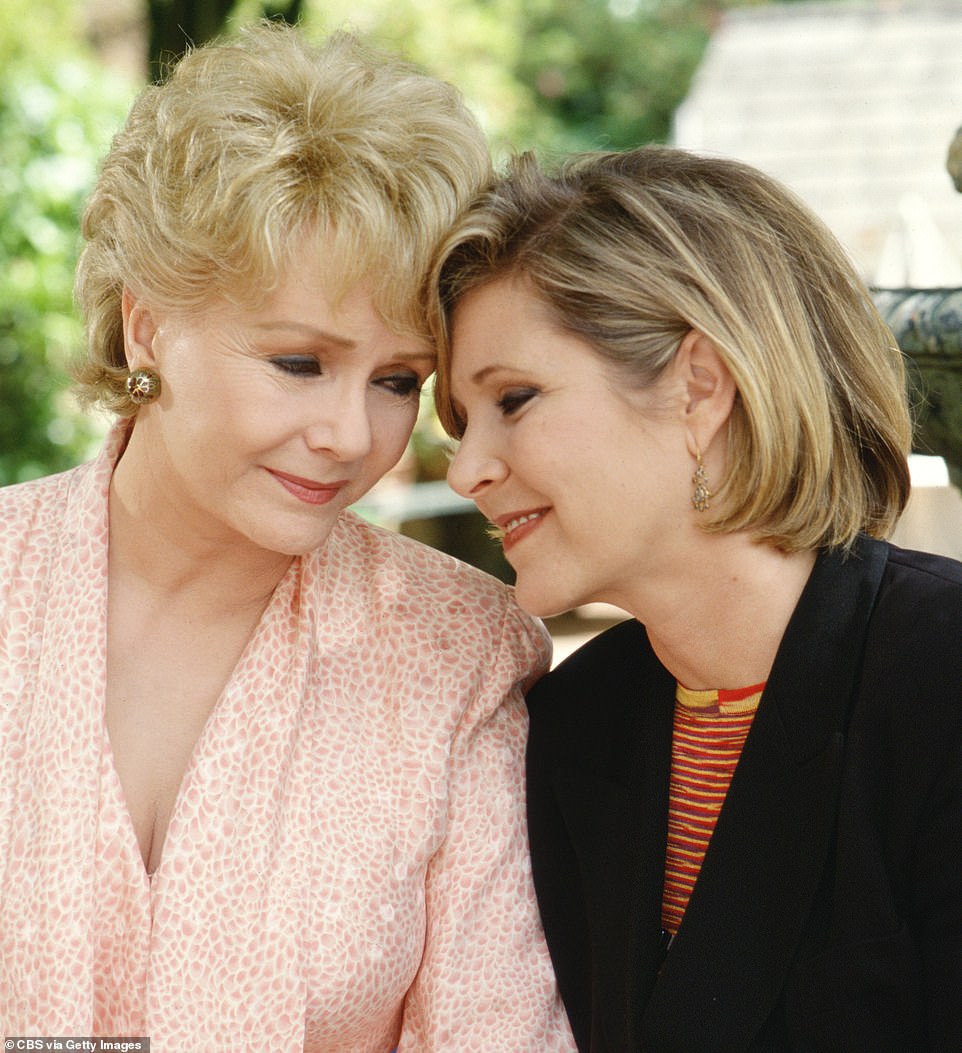 Todd bought the home in the 1980s to raise his family and provide a place for his mother and sister Carrie – who famously starred in Star Wars – a place to get away from Hollywood.

‘These were two of the world’s most famous people, even as honest, as forthcoming, as they were they knew they had to wear a mask in public…But here, at the ranch, that mask came off. It was a place to reel in the sanity,’ Todd told San Francisco Gate.

Over the years, his superstar mother would become a joint owner of the property.

The area surrounding the estate is filled with horse ranches and vineyards and a small refurbished general store, which sells local cheeses and wines.

Sotheby’s International, the real estate agency, said it was the perfect place for ‘privacy’ and that a lot of people have been migrating to more isolated areas.

‘If people want privacy and want land, this is the place – and people can get in now before it gets too saturated here,’ Jen Kennedy of Sotheby’s told the San Francisco Gate. 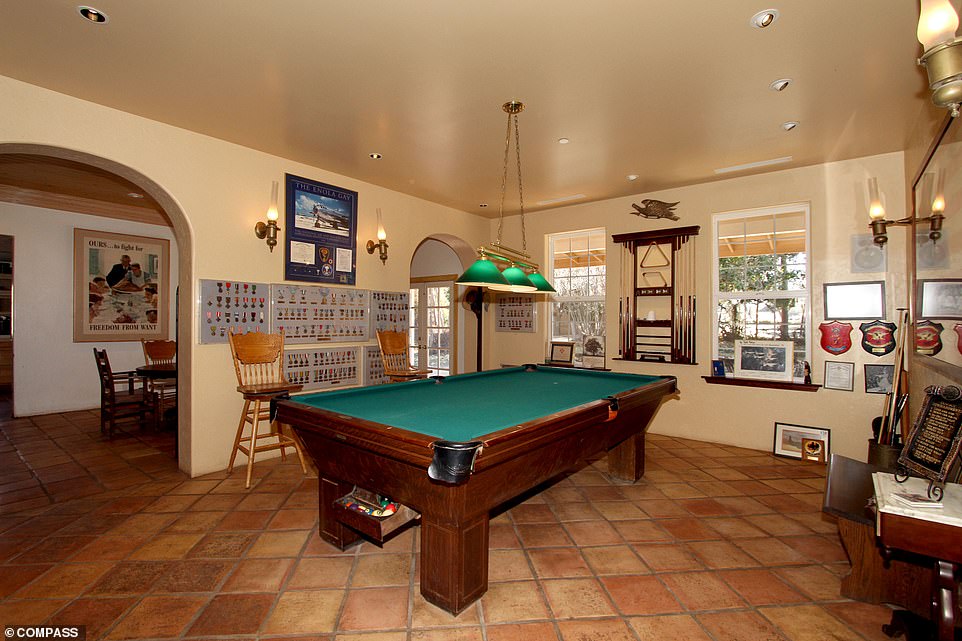 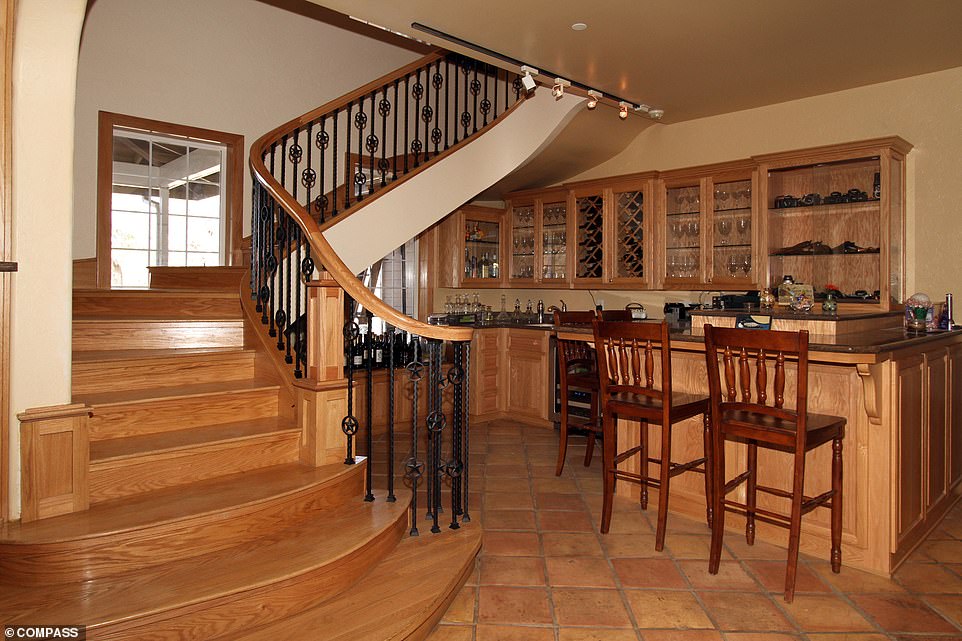 The home features a rustic design with lots of dark, exposed wood and cabinets 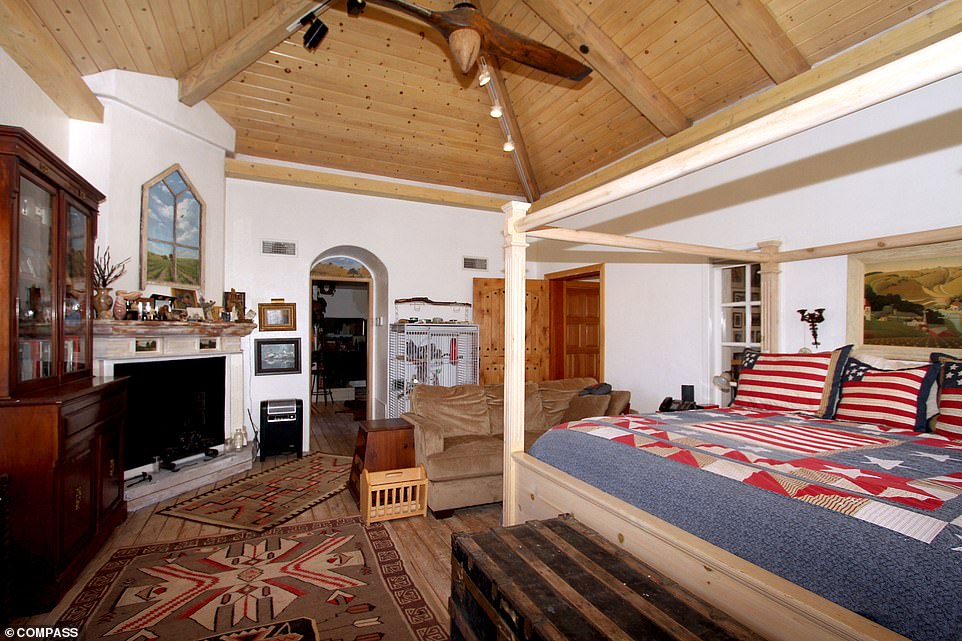 One of the bedroom features a large bedroom, framed in wood, and many paintings and photos on the wall

‘Plus, with the Fisher property – there’s just a lot of history. You feel it as soon as you arrive.’

Todd also told the San Francisco Gate that it’s the first time he has priced the property ‘so aggressively,’ but he feels the sale is imminent and that a good place shouldn’t go to waste.

‘We’re just not using it like we did, and it’s just insane to have something that valuable just sit,’ he told the outlet.

The future buyer may also get to keep some of the artifacts littering the home, Todd said.

‘Certain furniture or certain artwork that I would be fine with leaving, that’s all negotiable,’ he told the San Francisco Gate. But there’s also things that don’t fit that bill. There’s some rare stuff on the walls, some really high-end photography, and some family things.

‘But, if the right person shows the right – let’s just say concern and care – and I felt that they were going to look after something, I wouldn’t have any problem because that’s what Debbie wanted. She wanted to share some of that with her fans. And our storage room is bursting at the seams.’

Debbie was a large collector of Hollywood items, especially of the famous families’ items. She also had many costumes from films that were nominated for Best Production Design or Costume Design, according to the San Francisco Gate.

At one point, her private collection became the largest cache of Hollywood treasures in the world with more than 3,000 costumes, according to the outlet.

Debbie also used to dumpster dive in Carrie’s trashcans when they lived right next door to each other because her daughter often throw her own things out, like her diaries.

‘Carrie was a collector, but everything of hers she threw away, and Debbie knew it, so she rescued what she could,’ Todd told the San Francisco Gate. 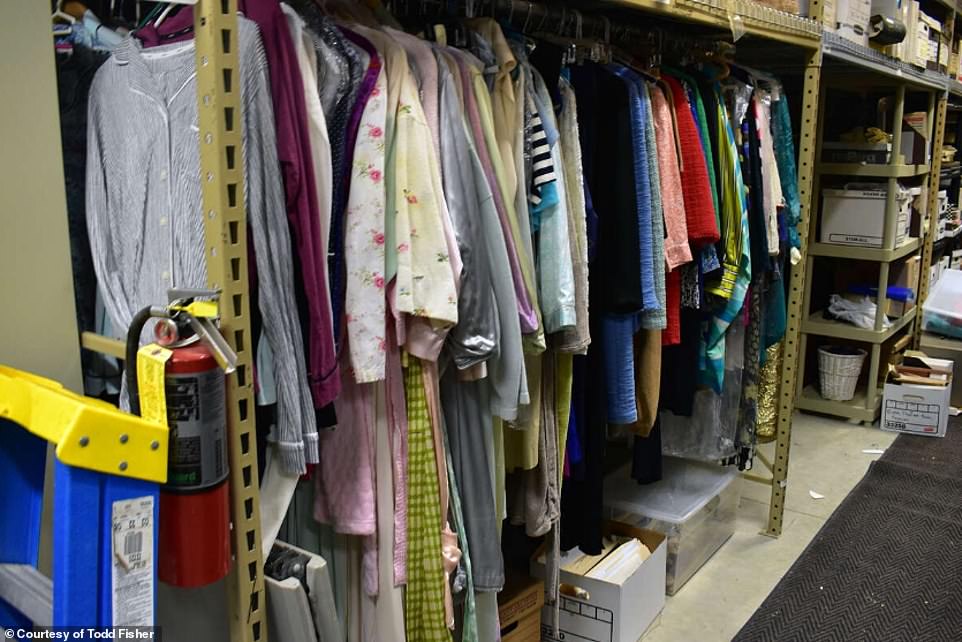 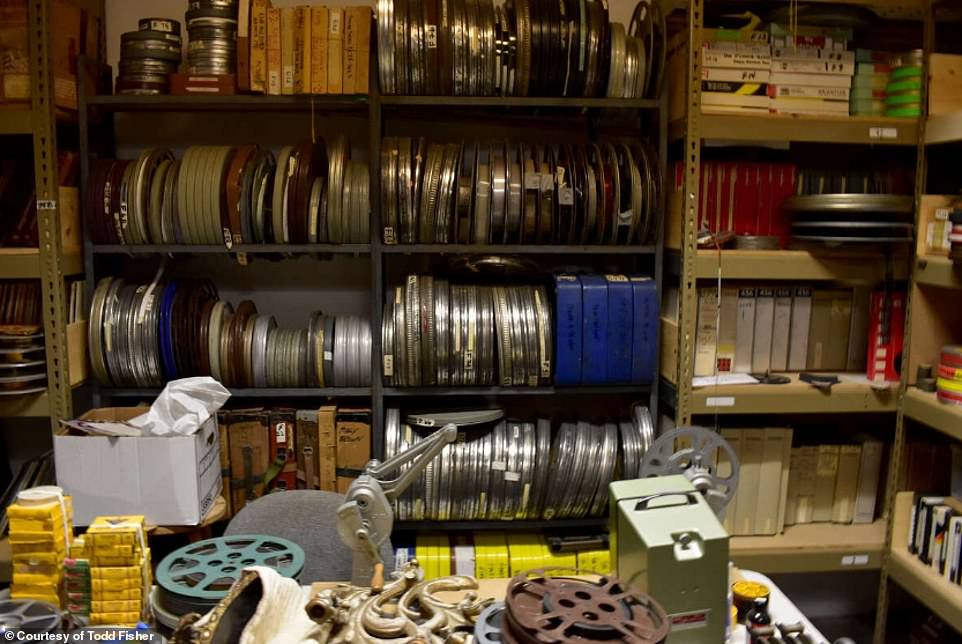 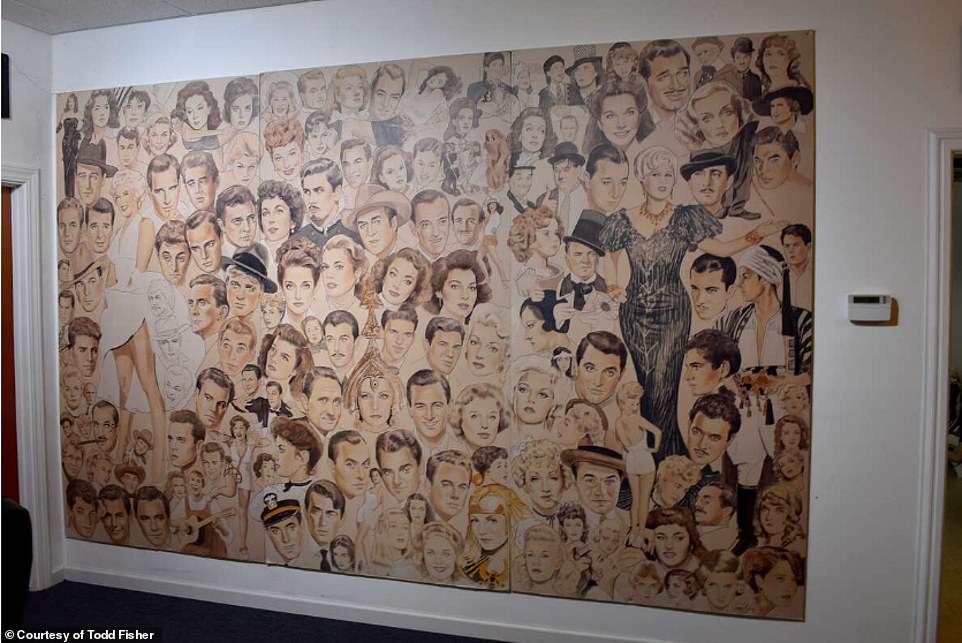 A large drawing of various famous faces is hung up in the home, alongside loads of other memorabilia 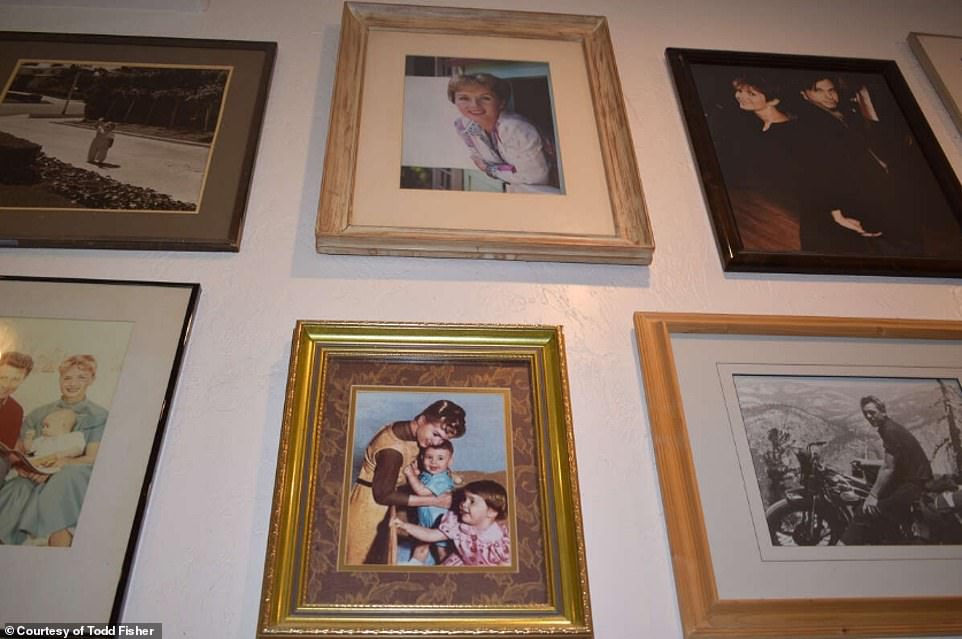 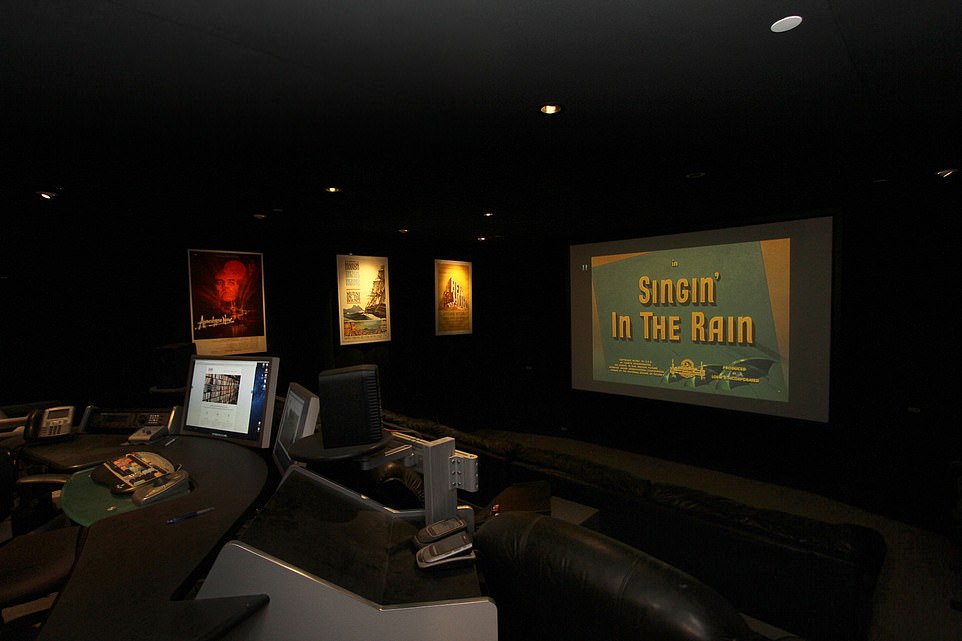 The home theater was a place where Debbie, who is famous for her roll n Singin in the Rain, and Carrie, famous for Star Wars, enjoyed a lot of time

Many of the items she dumpster dived from Carrie ended up in boxes at Freedom Farms, including the Star Wars star’s journals that would later inspire her 2016 memoir The Princess Diarist.

‘Debbie wanted it all – to keep and preserve,’ Todd told the outlet. He said his sister was more interested in buying gifts for others rather than keeping it.

Debbie did, however, sell some of the items after the family faced financial issues in the early 2010s, including Marilyn Monroe’s iconic white dress and Audrey Hepburn’s Royal Ascot dress, which went for $4.6million and $3.7million, respectively.

It was said that Debbie was sad when the Academy did not buy a single item from her collection, as she had been trying to sell to them for years.

The rest of the mementos went on to belong to Todd after his mother’s passing in 2016, who died a day after Carrie.

Now, the new Academy of Motion Pictures has requested some of the items, to not only conserve Debbie’s legacy, but turn her collection in a tangible museum.

Todd has only gave the museum a few pieces as he still figures out what to do with the vast collection, which he is currently going through and called a ‘labor of love,’ the San Francisco Gate reported. 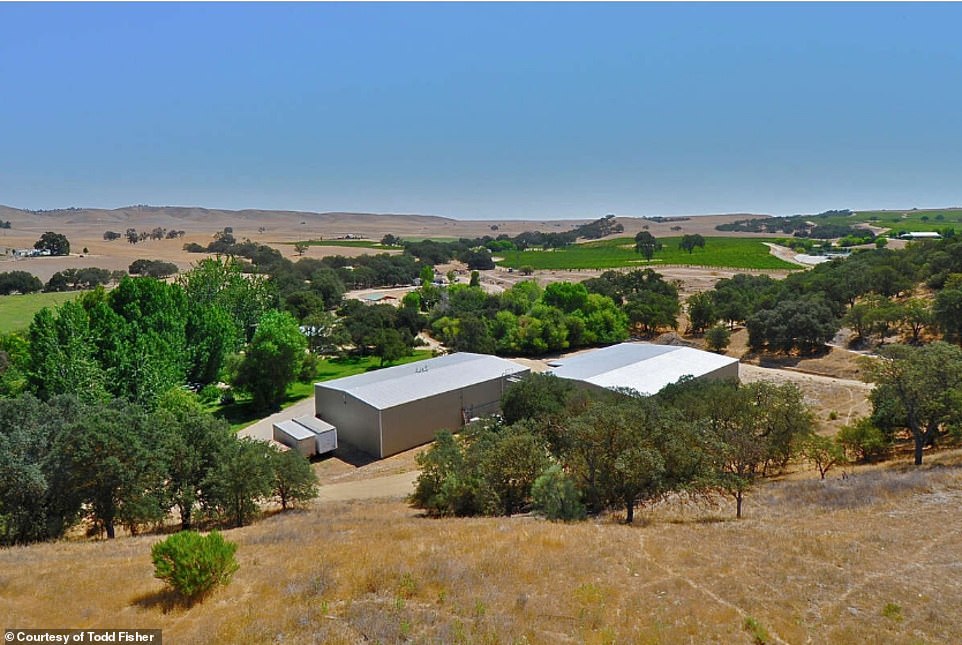 There’s two storage properties that amount to 17,000 square feet and are surrounded by hillsides and trees 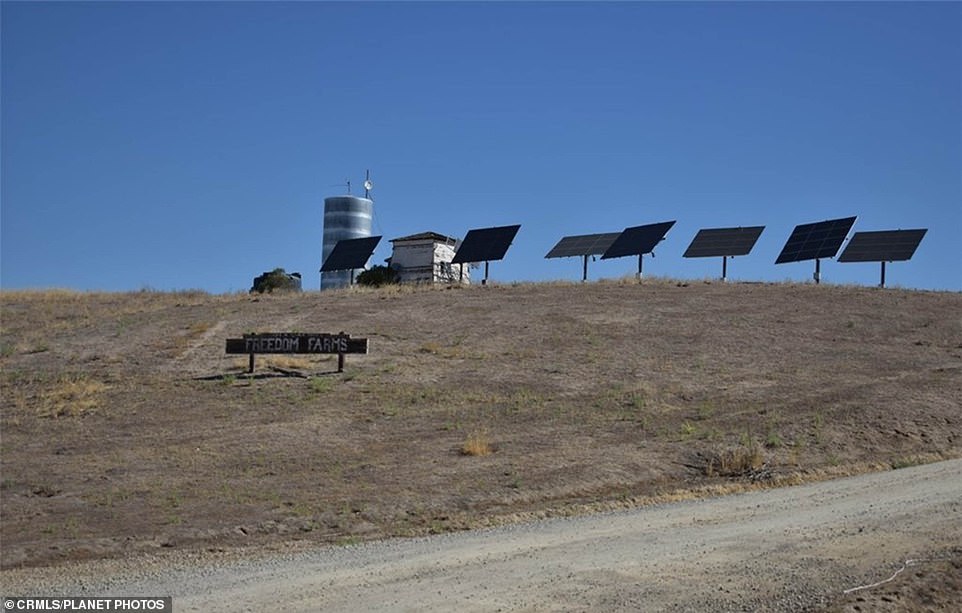 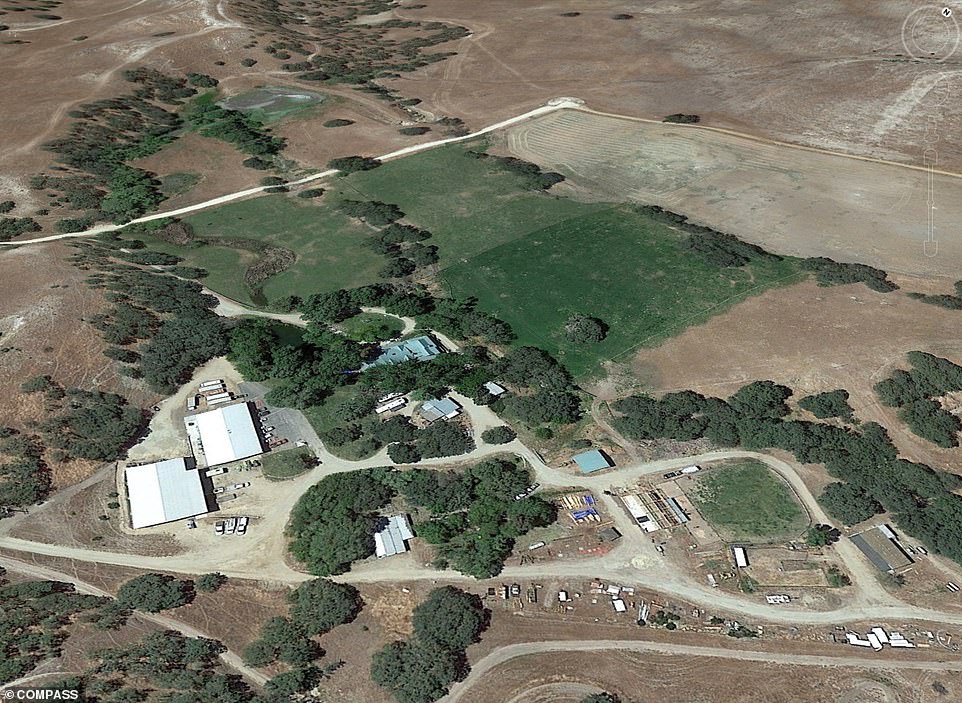 Todd owns the property and at one point, his mother was also a co-owner of the large estate