Tory conference attendees face angry mob of left wing protestors: Hecklers shout ‘Tory scum’ at Jacob Rees-Mogg while Michael Fabricant is booed and jeered at as both are given a police escort

Jacob Rees-Mogg required a police escort as he made his way to Conservative conference while being chased and heckled by protesters in Birmingham.

Fellow Tory MP Michael Fabricant was also violently intimidated and screamed at with vile abuse by protesters outside the conference – with some even calling him a ‘Tory c****’.

Video footage captured the Business Secretary running the gauntlet of hecklers shouting ‘Tory scum’ at him.

Mr Rees-Mogg faced a hostile reception as he crossed Victoria Square in the city centre, where hundreds of demonstrators descended on to vent their frustration at the Tory Government.

He was seen being escorted by several officers who were not letting them out of their sight as they loudly jeered and booed as he made his way to the International Convention Centre for the annual conference.

Many frustrated Britons could be heard calling him a w****r and a b*****d as he maintained a smile on his face at all times.

Officers could be seen pushing protesters away from Mr Rees-Mogg as they looked to get his attention and film him indiscreetly. 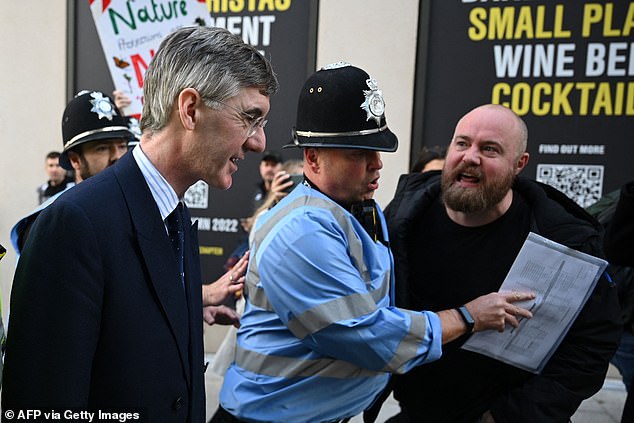 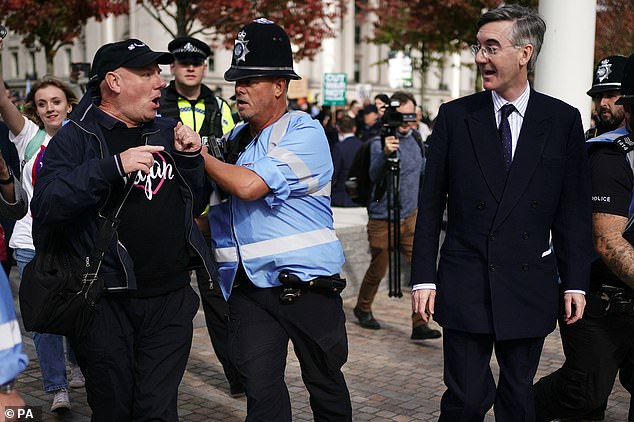 But he played down the verbal abuse claiming that the public have the right to ‘peaceful expression’ of their views.

Speaking to Sky News while being led through the crowd by police, he said: ‘There have been protests at Tory conferences since time immemorial, it’s nothing new.

‘It’s a fact of democracy.

‘And the right to peaceful expression of your view is fundamental to our constitution.’

Mr Rees-Mogg’s appointment by incoming Prime Minister Liz Truss was widely criticised by environmental groups due to his criticism of ‘climate alarmism’ and support for fracking.

Mick, who followed the minister with a placard that read ‘Tory lies kill’, said he joined the rally because ‘I hate the Tories’.

The 58-year-old, from Birmingham, who did not want to give his surname, described Prime Minister Liz Truss’s mini-budget as ‘disastrous for normal people’.

‘It’s just the start though – the next step is, to balance the books again, they’re going to cut public services even further. They disgust me,’ he said. 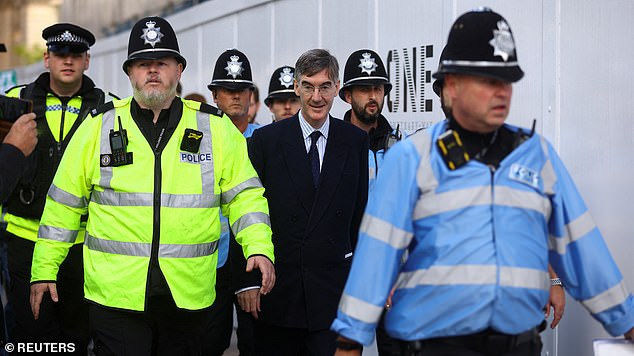 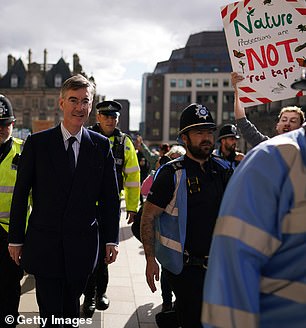 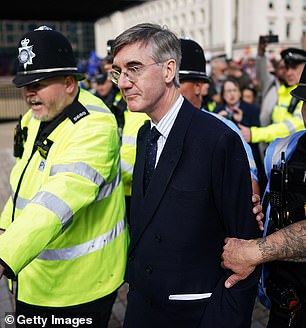 Speaking after the heckling, he played down the incident, saying ‘They’re shouting but it’s perfectly peaceful.’ 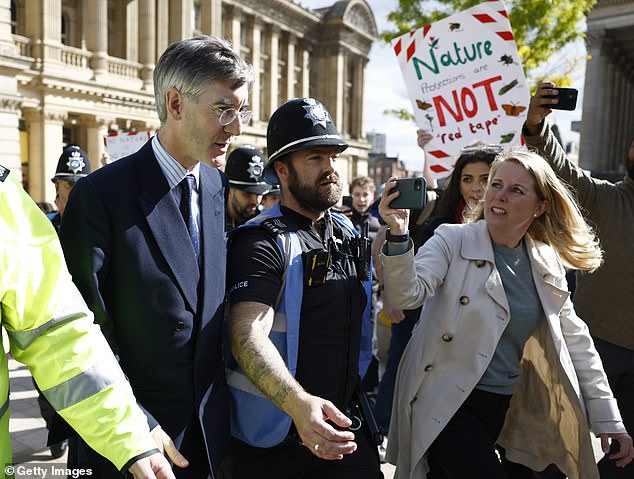 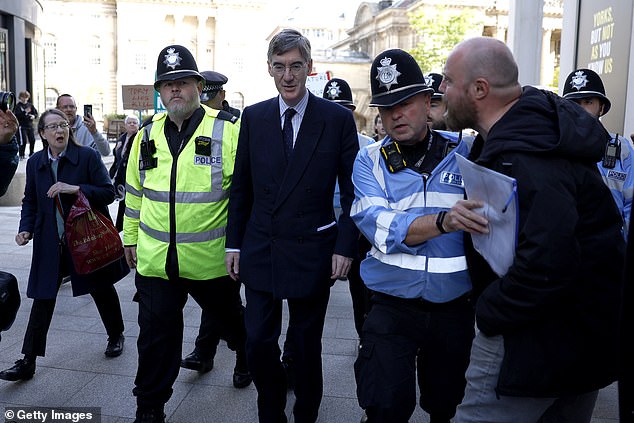 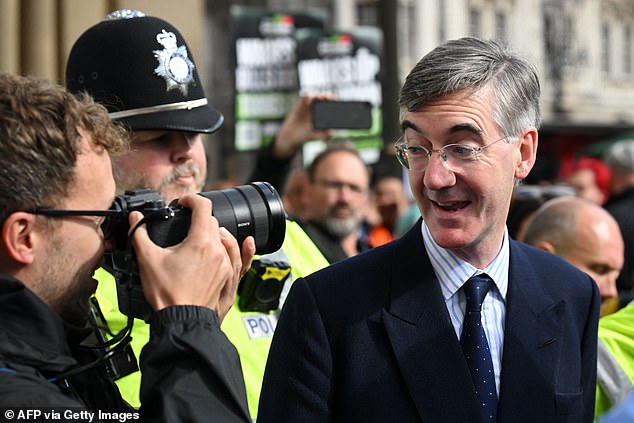 Meanwhile, Tory MP Michael Fabricant had abuse hurled at him outside the conference.

A video shows Fabricant walking through Birmingham before a young man walks up beside him and starts to follow him.

The protestor begins shouting and gesturing angrily at Fabricant before he seems to lurch towards the MP for Lichfield.

Dozens of other protestors appear to surround Fabricant as he walks into the conference.

Clearly concerned for his safety, a police officer begins to shield him and escort him away. 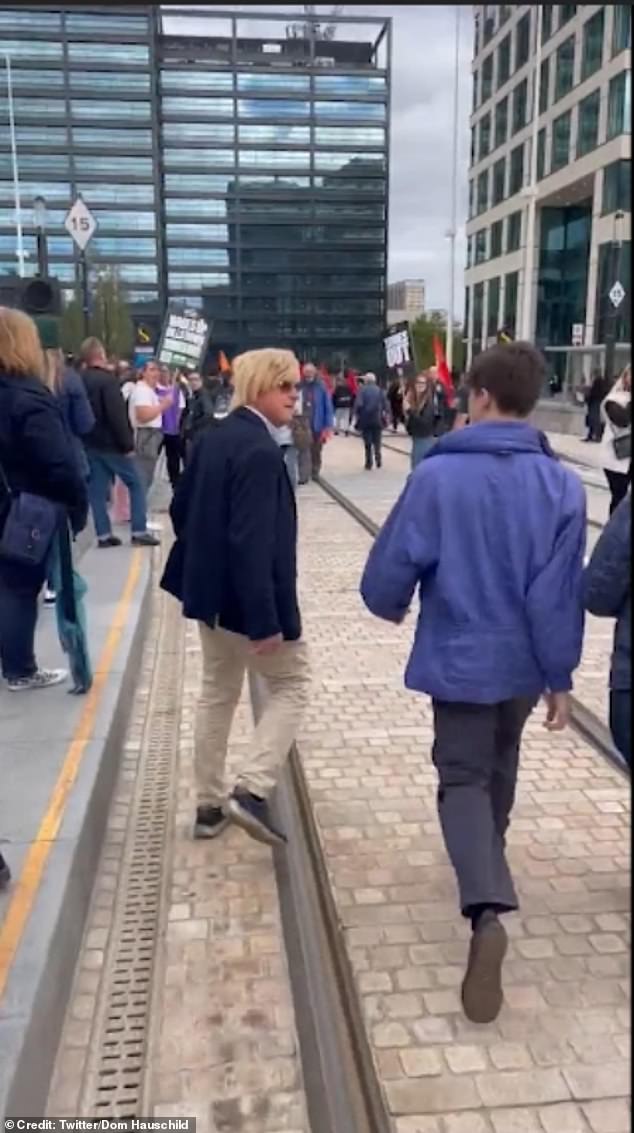 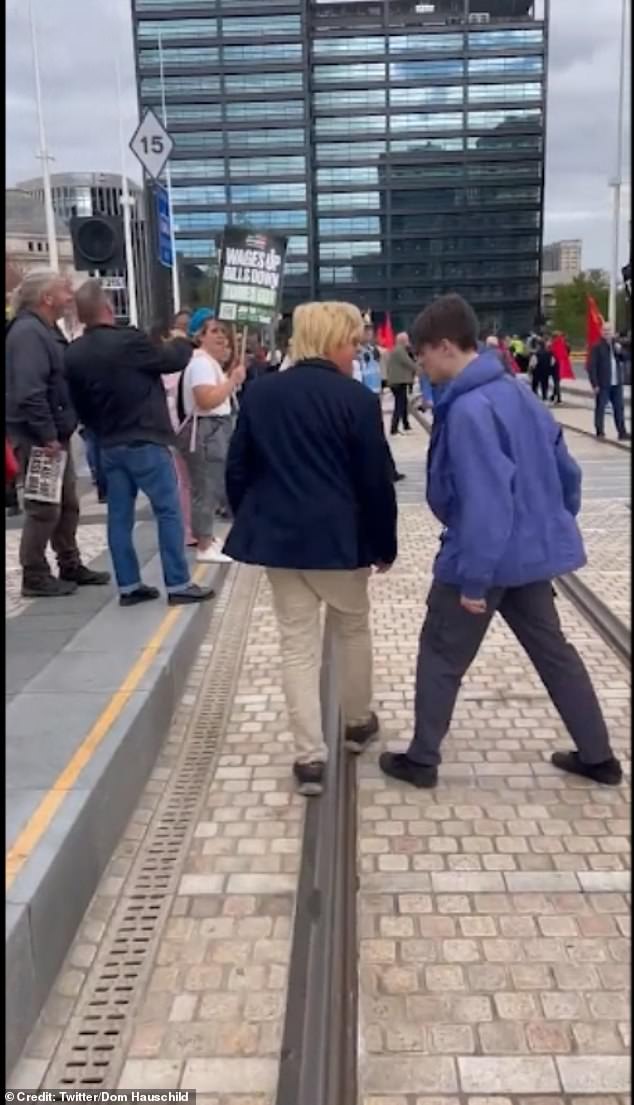 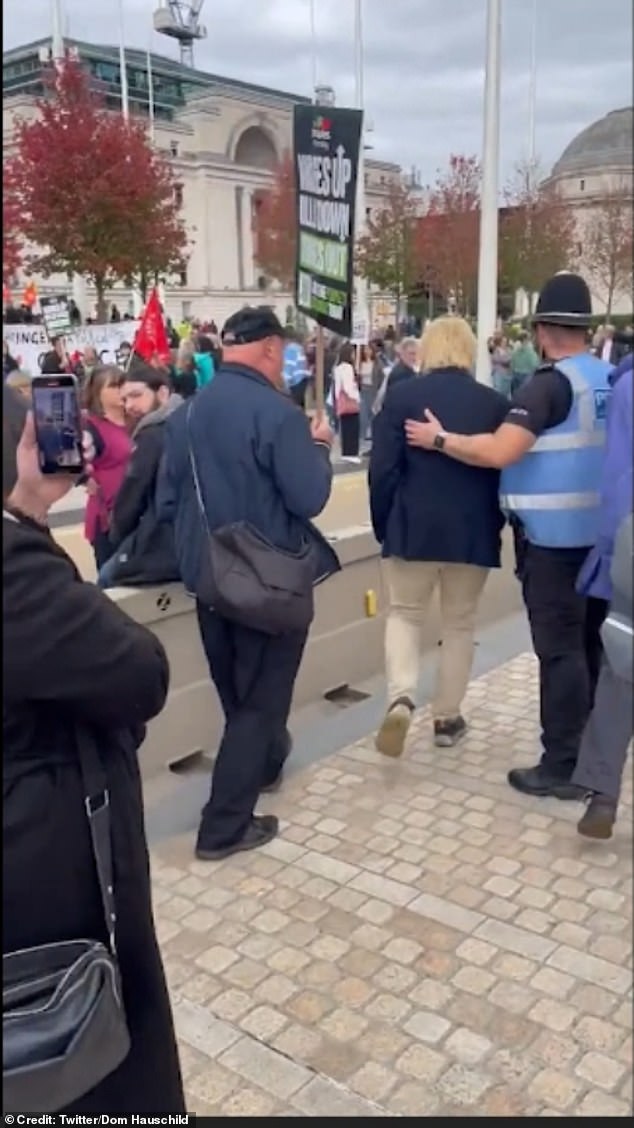 Clearly concerned for his safety, a police officer begins to shield him and escort him away

The Tory MP said that he had been ‘directed wrongly right into the middle of the protest.’

He added that this could have made the protestors think he was ‘deliberately provoking them’.

Fabricant went on to insist that he had not been attacked by protestors, contrary to reports on social media that he was ‘pushed quite violently’.

‘Social media is suggesting I was ‘attacked’ as I tried to get into #CPC2022. I was not,’ he tweeted.

He added: ‘No one touched me. Just shouted abuse. They were just loud!’ 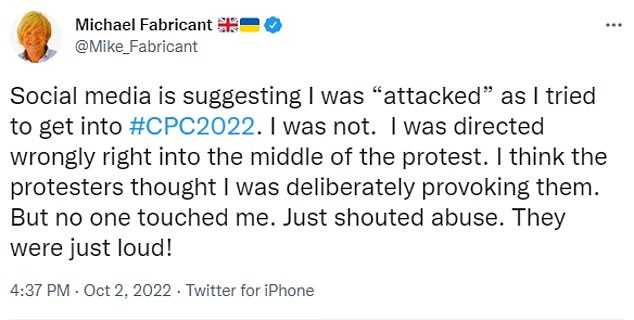 RMT General Secretary Mick Lynch, who aimed to disrupt the Tory conference as he rallied 50,000 rail workers together yesterday, told the protest that ‘we are in the middle of a class struggle’.

‘We pay tax to support our people not to subsidise the rich,’ he said after talking to supporters in Birmingham.

‘The rich should be subsidising us’.

He also said the Government was ‘acting in the interests of their people’.

Other demonstrators also expressed their anger over the Government’s move to axe the top rate of income tax for the nation’s highest earners during the cost-of-living crisis.

Jane Elledge, 53, an IT trainer from Bromsgrove, said: ‘Enough is enough really. We’ve had Brexit, we’ve had falling standards, we’ve had people having to work two jobs, people starving, people with no heating, and just the kind of final straw is the announcement of the richest people getting a tax cut.

‘Trickle-down economics doesn’t work. We get nothing – nothing for the working people. ‘It’s got to stop. Tories out.’ 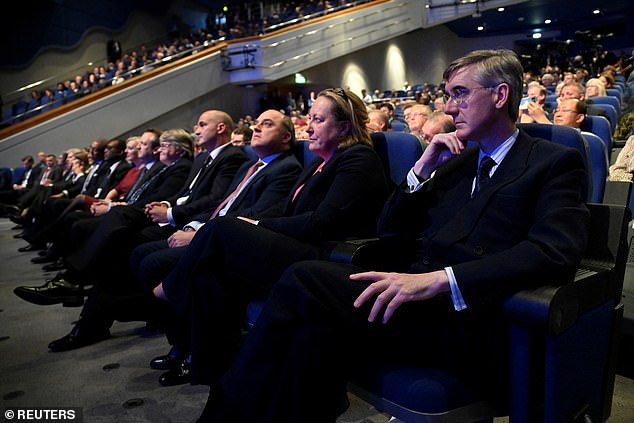 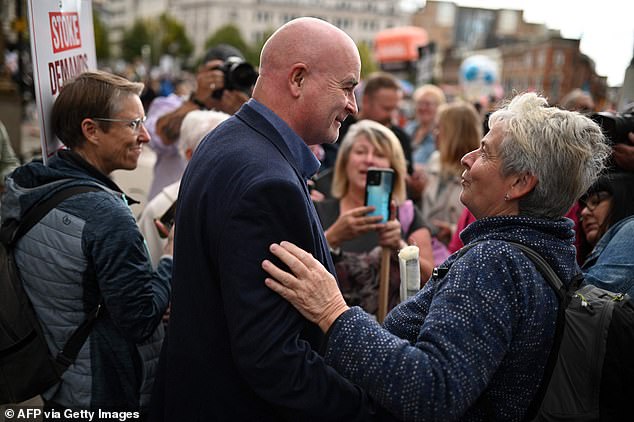 As speakers took to the stage, demonstrators chanted ‘Tories are not welcome here’ and ‘Tory scum out of Brum’.

Organised by the People’s Assembly campaign group, it was part of a wave of protests sweeping the country amid rising energy costs and falling living standards.

Speaking ahead of the conference, Ms Truss said she is standing by her tax-cutting plan as she refused to rule out public spending cuts.

‘I do want to say to people I understand their worries about what has happened this week,’ she told the BBC’s Sunday With Laura Kuenssberg programme.

She admitted she should have ‘laid the ground better’ for Kwasi Kwarteng’s financial statement, and said the Chancellor had made the decision to cut income tax for the richest.

The crowd later set off to march through central Birmingham.