A former head of royal protection has slammed Prince Andrew after he demanded to keep his armed police guards.

He was reportedly left fuming after he was informed by government ministers that his £3m-a-year armed police guards were to be axed from December in the wake of the Jeffrey Epstein scandal.

But the King’s brother, 62, is not going down without a fight – and has been arguing to keep his round-the-clock protection.

Now, Dai Davies, a former top cop has slammed Prince Andrew and said that the money used to protect the royal could instead be used to solve thousands of crimes in London. 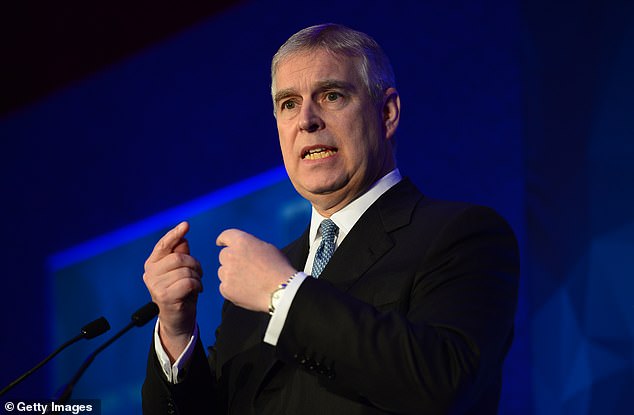 He brazenly said: ‘Why should we pander to this over-inflated egotist called Andrew?’

Davies was appointed Operational Unit Commander in charge of Royal Protection for HM The Queen and the Royal Family in 1995. He was responsible for Palace and Personal Protection throughout the UK and worldwide.

As a working royal Prince Andrew was entitled to a taxpayer funded security detail made up of armed police officers who accompanied him on all visits outside of Windsor, Berkshire.

But the decision to strip the prince of his official duties in January signalled there are no plans for him to return as a senior royal, and the latest move confirms Andrew faces a far tougher stance on the issue with Charles than he did with the Queen.

This followed the emergence of details of his friendship with paedophile Jeffrey Epstein, along with the disastrous Newsnight interview in which he denied sexually assaulting Virginia Giuffre. 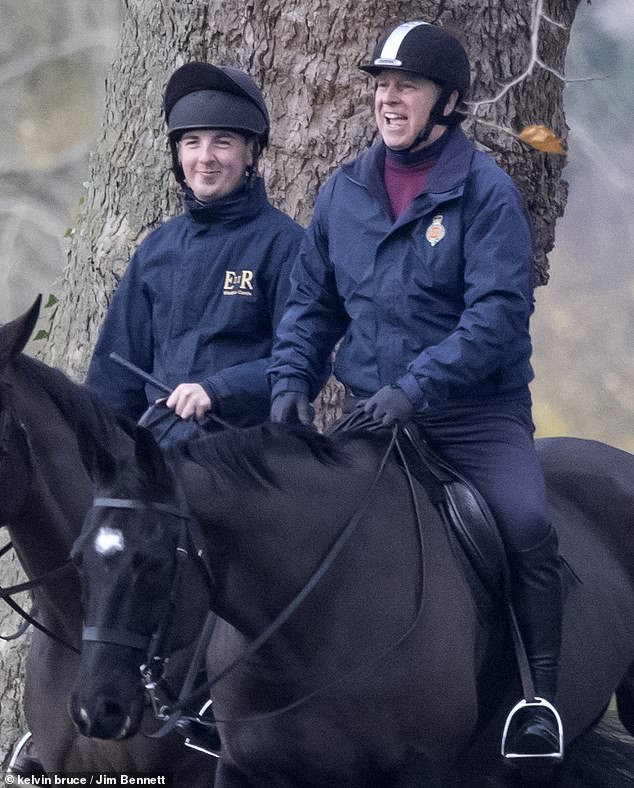 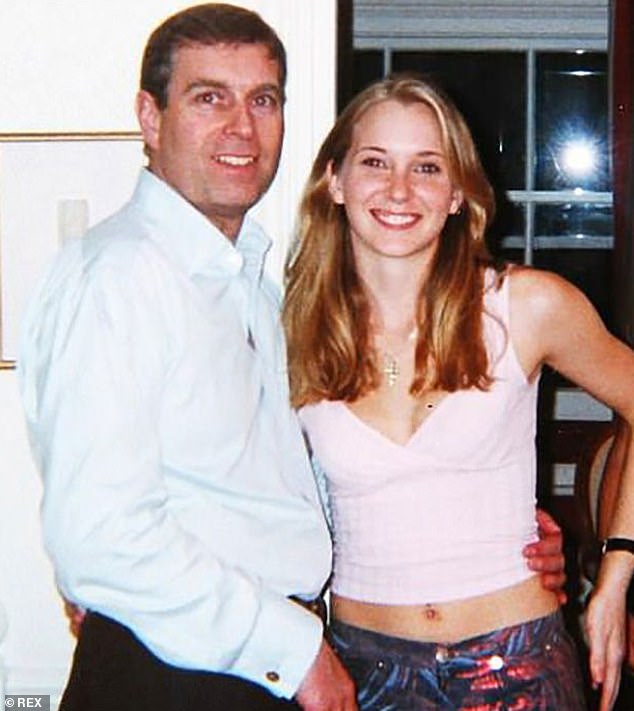 It follows his withdrawal from public life in 2019 as allegations by Virginia Giuffre came to light, along with details of his friendship with paedophile Jeffrey Epstein

The annual cost of providing armed security for the prince out of the taxpayer’s purse is estimated to be around £3 million.

But Andrew is understood to be complaining about the decision to the Met Police and Home Office, after the move means he would have to go without armed security or fund it privately.

A source told the Sun on Sunday: ‘He is going to write to the Home Office and the Met Police to complain about losing his taxpayer-funded security.’

The move comes after the disgraced royal was stripped of all his official duties by his late mother Queen Elizabeth II in January.

Prince Andrew stepped down from public life in 2019 over his friendship with the billionaire paedophile Jeffrey Epstein.

He was stripped of his honorary military roles, including Colonel of the Grenadier Guards, this January and was obliged to give up his HRH style in public.

Epstein, who lured hundreds of vulnerable young girls into his sex trafficking ring over a 30-year period with assistance from British socialite Ghislane Maxwell, was a close friend of the Duke and even stayed in his New York house.

During his disastrous Newsnight interview, Andrew told how he was introduced to Epstein in 1999 by the paedophile’s ex-girlfriend, Ghislaine Maxwell.

The Duke said he would see Epstein up to three times a year. 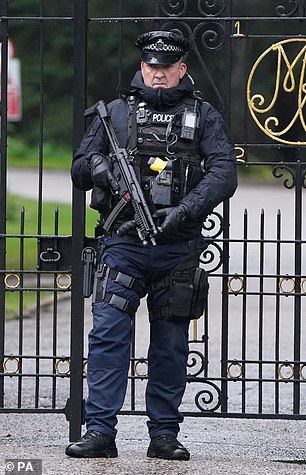 Prince Andrew will now lose his armed police guards, which cost the taxpayer £3 million a year

He admitted that he hosted him and Maxwell at Sandringham in December 2000 for ‘a straightforward shooting weekend’, and that he stayed in Epstein’s mansion in New York in 2010, when he visited to cut ties with the paedophile.

Epstein took his own life in a New York prison in 2019 before he could be put on trial for sex trafficking.

Maxwell was jailed in June for 20 years for procuring teenage girls for Epstein to abuse.

Andrew, 62, this year lost his bid to quash a civil lawsuit in America brought by Epstein’s former ‘sex slave’ Virginia Giuffre, who claimed she had been forced to have sex with the Duke.

The Duke vehemently denied her claims but, at the time, Buckingham Palace had said that the decision to strip Andrew of his titles was made by the late Queen.

This was understood to be strongly advocated for by both then-Prince of Wales Charles and Prince William. 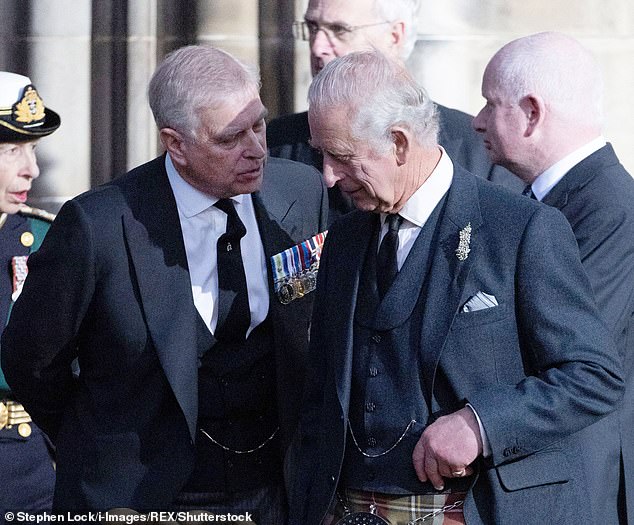 The Duke settled the civil case in February for a reported £12 million without accepting liability, and had believed this would allow him to return to Royal duties.

But the decision to remove his police security is the latest sign that King Charles is to hold a firm stance against Andrew’s demands.

It has been widely reported the disgraced royal had been lobbying his late mother for a return to royal life, and earlier this month it was revealed he had to be ‘dressed down’ by Charles just days before his mother’s death.

Charles had been tipped off by the Queen’s senior staff that Andrew’s ‘persistent lobbying’ of the ailing monarch to restore him as a ‘working royal’ was ‘taking its toll’, a source told the Daily Mail’s Ephraim Hardcastle column.

At the meeting on his Birkhall estate in Scotland, the future king made it clear to Andrew he would never return to royal duties.

Charles also made the point to his brother that if he was ever restored to his position it would be hard to find a charity that would want him as patron.

A senior Labour MP said last night: ‘He doesn’t seem to understand that he’s in disgrace and people don’t want to hear from him any more — especially him with his begging bowl.

‘I know he has a title, but that doesn’t mean he is entitled to taxpayer-funded protection. I know families who don’t know if they will be able to afford their kids’ Christmas presents this year.’

A source previously told the Daily Mail: ‘Naive as it may sound, he always had hopes of regaining his position as a senior Royal.

‘At the meeting, Charles told him that he can go off and have a good life, a nice life, but that his public life as a Royal is at an end. He was told, “You have to accept this”.’