A protester who ran onto the field during Monday night's NFL game has filed an assault complaint against the Los Angeles Rams, a spokesperson for the Santa Clara Police department told Yahoo Sports.

“It’s an active investigation,” Lieutenant Cuong Phan said Wednesday. “I can confirm a person did come in [Tuesday] at 1:45 p.m. and filed a report. However, it’s an ongoing investigation, so we’re not able to release details at this time.”

The complaint stemmed from a moment in the second quarter of Monday's game between the Rams and San Francisco 49ers, when a pair of animal rights activists representing Direct Action Everywhere jumped a railing and onto the field at Levi’s Stadium. One of the protesters was subdued on the sideline, but the second person made his way onto the field with an object in his hand that was emitting pink smoke.

Peyton and Eli breaking it all down 😂pic.twitter.com/nnqLP7fCWQ

As the man ran near the visitors' sideline while being chased by security, Rams linebacker Bobby Wagner and defensive lineman Takk McKinley intervened and knocked the protester to the ground. Cell phone footage showing Wagner delivering a hit on the protester went viral across social media platforms. Both protesters were ticketed by the Santa Clara Police department and released.

Video of the incident also appeared to show that a man from Levi’s Stadium security injured himself while chasing the protester.

Wagner spoke about the matter on Wednesday, and said he was aware of the police report, via The Associated Press' Greg Beacham.

"We don't know what that (pink smoke) is. You've just gotta do what you gotta do," Wagner said.

TMZ was the first to report the fan’s complaint to Santa Clara police and quoted a statement from Direct Action Everywhere calling the hit by Wager and McKinley “blatant assault,” adding that the protesters were “beaten up but in good spirits.” The Rams ultimately lost the game to the 49ers 24-9.

“That’s not making a play,” Wagner said. “That’s just keeping it safe. You don’t know what that fan got or what they’re doing. You see it all the time, and we don’t know what they’re carrying in their pockets. It’s whatever that little smoke stuff is, but that s*** could be dangerous. … One of the [security] guys on the other side, it looked like he got hurt, and security looked like he was struggling, so I was frustrated, so I took it out on him.”

It’s unclear whether the protester filed complaints against Wagner and McKinley specifically or the entire Rams organization.

The Santa Clara police said the investigation remains open and that the complaint will not be public until the case is either closed or results in a charge. 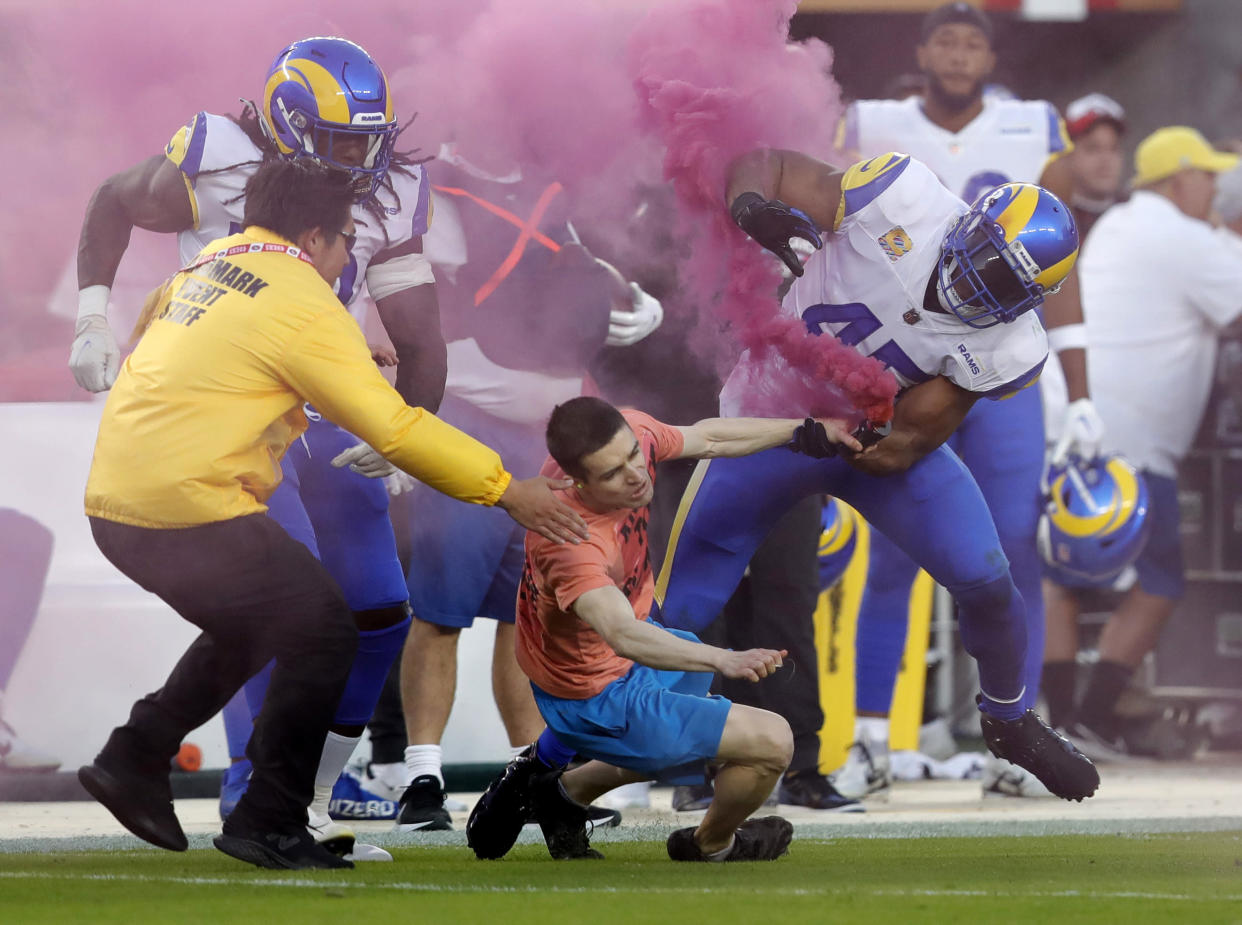