Architect, 31, faces jail for molesting a fellow-graduate when she passed out drunk on a Chesterfield sofa following all-you-can-drink ‘bottomless’ Prosecco brunch

An architect faces jail after sexually assaulting a fellow-graduate when she passed out on a leather Chesterfield couch after an all-you-can-drink ‘bottomless Prosecco brunch’.

Oliver Smail, 31, who has a Master of Architecture qualification from Kingston University was convicted of touching the woman, who joined his group’s all-night pub and bar crawl, between her legs.

After he was arrested by police, he admitted: ‘She is a pretty girl and I am a man so I may make a few moves’.

In court, he denied one count of sexual assault by penetration at his friend’s two-bedroom flat in Walworth, south London on September 8, 2019.

But the jury found him guilty after hearing evidence from his victim.

Oliver Smail, 31, was convicted of sexual assault by penetration at his friend’s two-bedroom flat in Walworth, south London on September 8, 2019

‘I remember him trying to touch me and moving to the other side of the sofa,’ she told the jury at Inner London Crown Court, adding she woke at 6.30am with her underwear and tight spanx shorts around her knees.

She insisted Smail, of Aylesbury, Buckinghamshire and a former Planning Support Officer with Aylesbury Vale District Council, groped her between the legs as he lay alongside her on the living room sofa.

He denied the accusation, but was convicted by the jury of one count of sexual assault by penetration.

Smail was bailed until November 28 for sentencing.

The woman told the trial: ‘I woke up and that’s what was happening.

‘I think he was completely out of it. Very intoxicated.’

The victim told the trial she began drinking in Dalston’s trendy ‘Jones & Sons’ which offers a two-hour ‘Off The Wagon’ brunch of never-ending Prosecco.

She told the court: ‘We were drinking for two-and-a-half hours.’

The woman was celebrating a birthday and she and her two female friends joined Smail’s mostly-male group and continued drinking cocktails at the nearby ‘Three Sheets’ bar.

Smail and his friends Tom Madden and Alexander Hodgson-Doughty all know each other from the University of Kent. 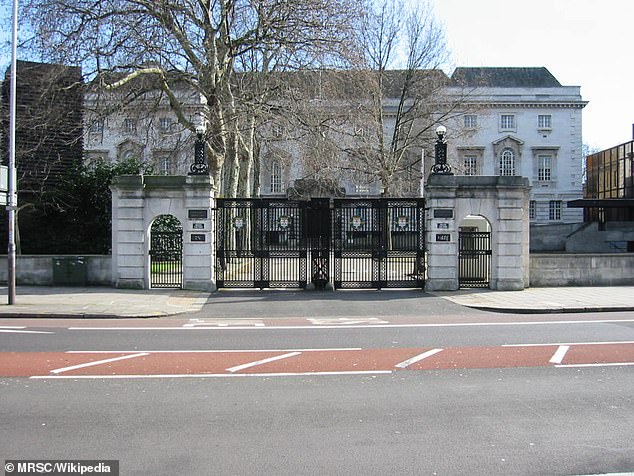 The jury convicted Smail at the Inner London Crown Court, after hearing the victim’s testimony of how he groped her between the legs after a day of drinking and taking drugs together

The court heard how they moved onto other local pubs and bars, continuing to drink and both the woman and Smail snorted cocaine during the evening and she also took an ‘ecstasy’ pill.

She said: ‘I have been very honest that I took ‘ecstasy’ and cocaine. I have no recollection of who gave it to me, it was one of the three men.’

The group then took a minicab to Elephant & Castle with the vague idea of going to the Ministry of Sound nightclub, but instead bought a bottle of gin from an off-licence and continued drinking at Mr Hodgson-Doughty’s flat.

Recalling a short chat she had with Smail that evening, she said: ‘I am not denying I was drunk.

‘I got the feeling he was flirting, but from early on I was not interested and made that clear.’

After a few rounds of gin and tonics at the flat, Mr Hodgson-Doughty disappeared into his bedroom with the complainant’s friend, leaving her to sleep on the living room sofa.

The next morning she burst into the bedroom to complain to her friend about Smail, who asked him: ‘Did you finger my friend while she was asleep? Did you do that?’

The friend said Smail tried to hide under a pillow and replied: ‘I thought she consented.’

When cross-examined, he insisted he was referring to her consent to leg touching and nothing more intimate.

He quickly put his jacket on and left the flat as the victim’s friend continued shouting and demanding the police be called.

Smail, who runs his own design firm, told the jury all he did was rub the woman’s leg when he woke up in the middle of the night to find it in his crotch.

He confessed to taking cocaine while drinking in ‘Jones & Sons’.

He said: ‘It is not something I regularly do, it was pushed towards me during brunch.’

Regarding the victim, he said: ‘I didn’t find her sexually attractive,’ yet admitted texting a friend during the evening to describe her as ‘cute.’

Claiming his motivation for squeezing onto the couch was to sleep and not a sexual move, he said: ‘I was quite drunk.’

‘I woke up with something rubbing against my crotch.

‘I was in a very deep sleep, very hazy and my reaction was to feel the leg. I kind of rubbed it, squeezed it like a massage just to see if it was a girl or a guy or a reaction of some sort.

‘She kind of squeezed my hand and rubbed it and nothing was said by anyone.’

Smail claims he got up to sleep in the spare room, but Mr Hodgson-Doughty told him it was being rented via Airbnb, so he returned to the sofa.

He said: ‘When I woke up, I was being kicked in the head. It was not a hard kick and I took it as a meaning she did not want me on the sofa. I had been rubbing her calf earlier on.

‘I was so dazed and confused. I did not understand why I was being kicked.’

He said: ‘I was not aware of what she was wearing under her dress. I never moved any of her clothing.

‘I only had one hand that was free at any time.’

Two weeks after the sexual assault took place, Smail was questioned, but was not charged until more than two years later.

He recalled: ‘It was upsetting. I remember my heart racing and having this massive weight on my shoulders and having to trust in this system that I am going through.’

Insisting he would do nothing without the woman’s consent, he recalled the moment she kicked him in the head: ‘I remember thinking: Oh God. I totally misread that situation.

‘I grabbed a pillow and slept on the floor until I was woken up by her friend pulling it away.’