How to Do the Hip Thrust for Bigger, Stronger Glutes

The hip thrust is a valuable addition to your training routine that can help build stronger glutes, but are you sure you’re even doing the exercise correctly?

For this movement, you shouldn’t settle for anything other than perfect form—especially because it’s such a simple, essential exercise that can serve as one of the centerpieces of your training plan. Let Men’s Health fitness director Ebenezer Samuel, C.S.C.S. and associate fitness editor Brett Williams guide you through the move’s subtleties, saving you from the bad habits that are keeping you from unlocking your fitness potential.

Before slide underneath a barbell and start thrusting, take note that it’s extremely important to pay attention the movement here. Your positioning is essential to make sure you’re getting the most out of the exercise—so let’s break down everything you need to know. 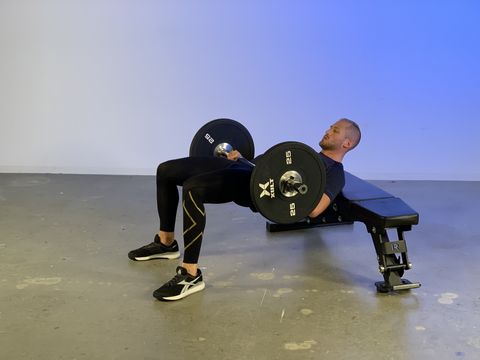 Eb says: You’ll see plenty of people using barbells to do hip thrusts, and you certainly can load a barbell with weight for hip thrusts. But it’s not your best option if you have smaller bars, like EZ-curl bars or non-Olympic barbells, available.

Your mental focus during the hip thrust should be on aggressively driving your hips upwards, solely with glute power, and the long levers of a barbell take away from that focus. You wind up having to balance the bar with your arms, and you can’t solely focus on creating glute contraction.

Eb says: When you position yourself for the hip thrust, find something in front of you and a few feet higher than your head to look at, and don’t take your eyes off of it, even when you’re finishing the hip thrust.

Yes, this means that you’ll finish the hip thrust with your head and neck no longer in a neutral position relative to your torso, and in most exercises, we wouldn’t want you doing this. During hip thrusts, that’s okay. By keeping your head focused forward, you’ll help take your lower back out of the equation, which is exactly what you want to do. 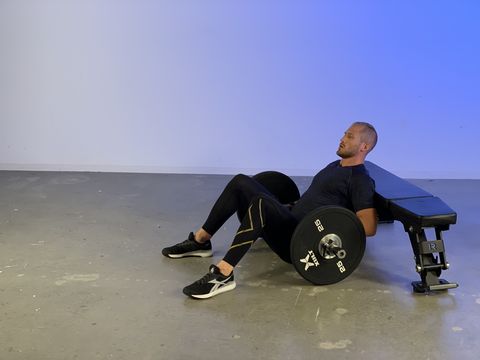 Glutes Are the Drivers

Drive your hips up only as high as they’ll go from squeezing your glutes as hard as possible. In most instances, that’ll be a hair lower than your shoulders. That’s okay. If you try to extend past that, you risk over-involving (or worse, injuring) your lower back.

Eb says: Work to actively open your knees wide. This does two things. First off, it’ll protect your knees; we never want your shins caving in on any leg movement, and actively opening your knees will help insure your that doesn’t happen. This will also get your hip abductors to aggressively fire, pushing even more glute involvement.

Eb says: Don’t worry if you need to reset your body or the weight every few reps. You’re dealing with a bench and a barbell that can sometimes be longer than you want, and you’re still trying to be explosive through the hips and glutes.

That may lead the bench, or your position on the bench, to shift somewhat as you work through the motion, especially if you’re moving with pop. If you need to slightly reposition yourself every 2 to 3 reps, do so. It’s better than doing sloppy reps with the bar tipping one way, or with the bench sliding out of position.

Want to master even more moves? Check out our entire Form Check series.