Cardi B is feeling the birthday love. The “WAP” rapper shared on her Instagram on Saturday the present that her daughter, Kulture, gave her ahead of her birthday. Cardi, who turns 28 on Sunday, posted a video of a billboard that features her and her 2-year-old daughter dressed in pink.

“Happy birthday Mommy. Love, Kulture,” the sign reads, as Cardi can be heard in the back of the clip admiring the gift.

While she didn’t specify who bought the present on her daughter’s behalf, she captioned her post, “Thank you sir 😏😏😏I love it.” Many fans believed it to be Cardi’s ex and father of her daughter, Offset.

The billboard comes just a day after the Migos rapper admitted to missing his ex. The Shade Room posted a video of Offset asking fans to help him choose a hair color, in which a user wrote on the post, “He look stressed out…”

Offset replied, writing, “I am. I miss MRS.WAP…call her for me but private.” 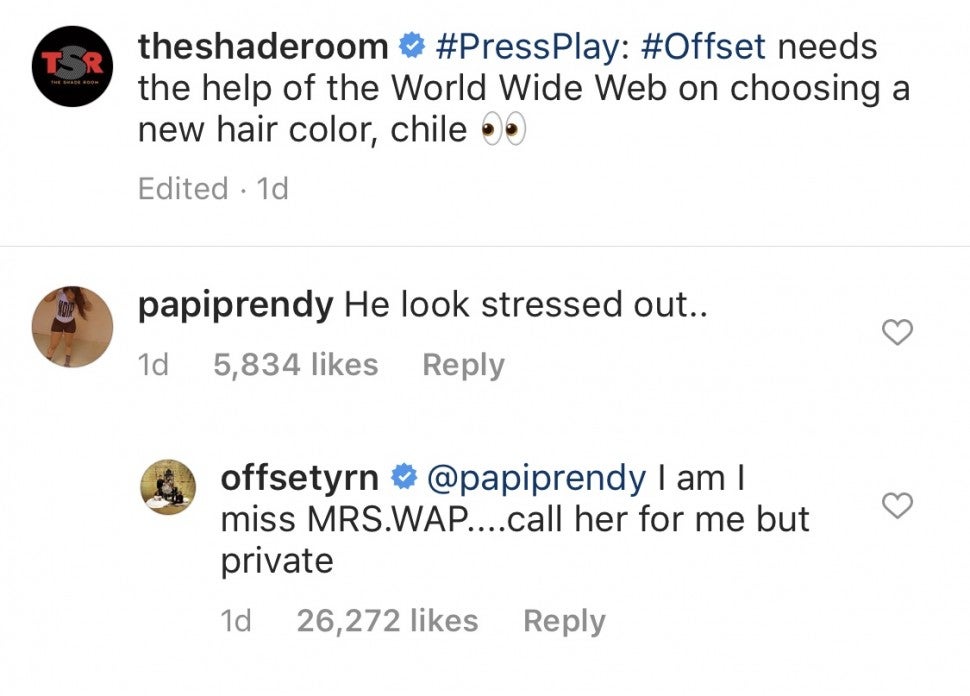 After being on and off for years, Cardi filed for divorce from Offset in September. Cardi later took to social media to address her separation, stating that she decided to leave him after being tired of arguing so much.

“The reason for my divorce is not because of none of that sh*t that ever happened before. It’s not because of cheating,” she shared. “I just got tired of f**king arguing. I got tired of not seeing things eye to eye. When you feel like it’s just not the same anymore, before you actually get cheated on, I’d rather just leave.”

She continued that she wasn’t getting a divorce for publicity, adding that, “Nothing crazy out of this world happened, sometimes people really do f**king grow apart.”

Additionally, when she went live on her OnlyFans account, she also stated that she was single by choice and “could date any man I want.”

“My DMs are flooded. I don’t actually want to date nobody. I’m so focused on my business that it’s crazy,” she added.

Cardi B Says Her 'DMs Are Flooded' After Offset Split