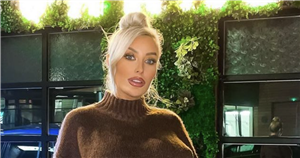 The Love Island star discussed how she kept her pregnancy away from social media and the public eye to avoid any unnecessary stress.

The 27 year old explained: "With my pregnancy, I didn’t announce it for quite a long time – just because I’ve had very bad experiences in the past with pregnancies and stuff like that.

"I’ve had three miscarriages before, so I was under quite specialist care at first. It wasn’t something I wanted to advertise and cause stress upon."

Despite her past heartbreak, Chloe – who is expecting a baby girl – revealed she is feeling calm throughout her pregnancy.

"I’m not actually worried about it, I don’t know why because I’m not really a chilled person, but since being pregnant I’m very chill."

Chloe surprised fans when she announced she was pregnant, after keeping her relationship under wraps.

The only moment fans had a glimpse into her private life, was after Leeds-based videographer David Houghton, shared her pregnancy snap with the caption "My Family."

The blonde beauty made a conscious decision to keep her relationship with David away from the eyes of social media.

Chloe continued to FUBAR Radio: "I’ve had relationships on social media in the past and let’s put it this way, it’s not good. What benefit do you get from it? You don’t.

"A previous relationship I had before, I put that on social media. The same day I put it on social media, the messages were flooding through to my boyfriend at the time and there was all these follower requests and stuff and I just think some people don’t have any respect.

The series three Love Islander added: "And people make up stories like 'Chloe’s done this, or she’s done that', and to be honest with you, I’m too old for that drama. I’m so chill, I’m happy, and that’s all that matters."

After announcing the happy news of her pregnancy, the next step was to share the gender of her new addition to her new growing family.

After reaching 35 weeks, Chloe added a sweet video revealing she is expecting a baby girl.

In the video to her 283,000 followers, she teased fans with the caption, "WE ARE HAVING A…." before glittering pink paper cascaded down, declaring a girl is on the way.

"These things are not as easy as they look to pop, lucky I was sat down," the star laughed as she tried to unload the confetti.

To stay up to date on all the latest news on Chloe Crowhurst and more of your favourite stars, sign up to OK!'s daily newsletter.