This is probably her most political song to date, and in it she speaks to Trump directly, saying “We’re in a state of crisis, people are dying / While you line your pockets deep / Commander in Chief, how does it feel to still / Be able to breathe?“

But here’s the thing. During the performance, Demi had the word VOTE splashed behind her. See? 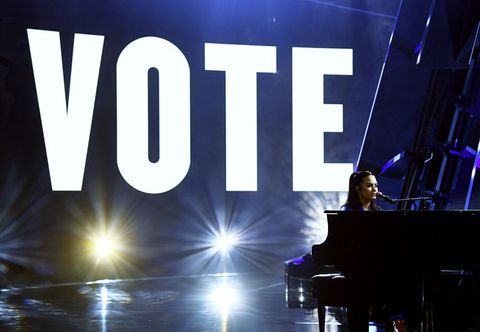 And according to TMZ, it was removed for broadcast by NBC, with sources telling the outlet that “the network pulled the plug on the ‘VOTE’ message because the song itself was a slam on Trump and the ‘VOTE’ message was a call to vote against him.”

Here’s footage of what the performance reportedly should have looked like from TMZ:

Demi doesn’t appear to have commented on NBC censoring her, probably because she was too busy putting out a new music video last night and actually using her platform to encourage people to vote.

#CommanderInChief music video is out now🖤 I'm urging you to look out for one another, to support your loved ones, your neighbors, & those you may not have met yet in your community. Place your early votes, or show up to the polls on Nov 3rd. Visit iwillvote.com for your voter info.