Friends reunion is 'set to start filming NEXT WEEK'

Friends reunion is ‘set to start filming NEXT WEEK’ at original Warner Bros. soundstage in LA… after the pandemic delayed the project by months

The highly-anticipated Friends reunion is set to finally start filming next week according to a new report, after the project had been set back months due to the ongoing pandemic.

Although HBO Max have declined to comment, it has already been confirmed that the reunion will feature all original six cast members – who will filming at the original soundstage – Stage 24 – situated on the Warner Bros. Studio lot in Burbank, California. 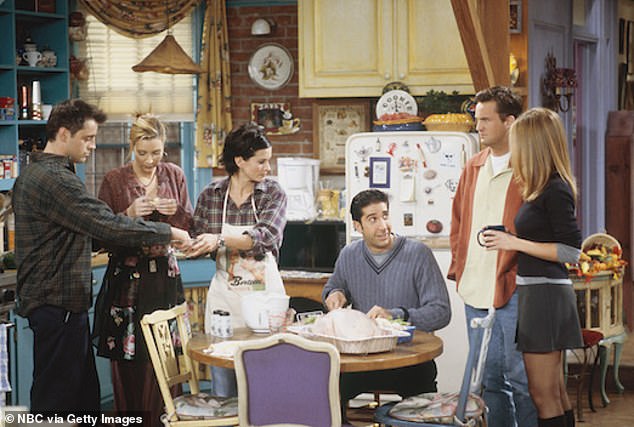 They WILL be there for you! Friends is set to start filming again NEXT WEEK in Burbank, California, according to a new report

The news comes after David Schwimmer has confirmed that he and his former Friends co-stars will not be in character when they shoot the project.

The actor, 54, is set to be interviewed alongside Courteney Cox, Lisa Kudrow, Matthew Perry, Matt Le Blanc and Jennifer Aniston as they discuss the comedy that propelled them to stardom in 1994 and lasted for 10 years.

And during an appearance on The Graham Norton Show, which is set to air on Friday night Schwimmer hinted that there may be a brief moment of the stars reviving their beloved classic sitcom characters.

The New York-based actor, who played Ross Geller in the comedy, told host Graham Norton: ‘I’m going to LA to shoot the Friends Reunion. I will get to see everyone for the first time in years.’ 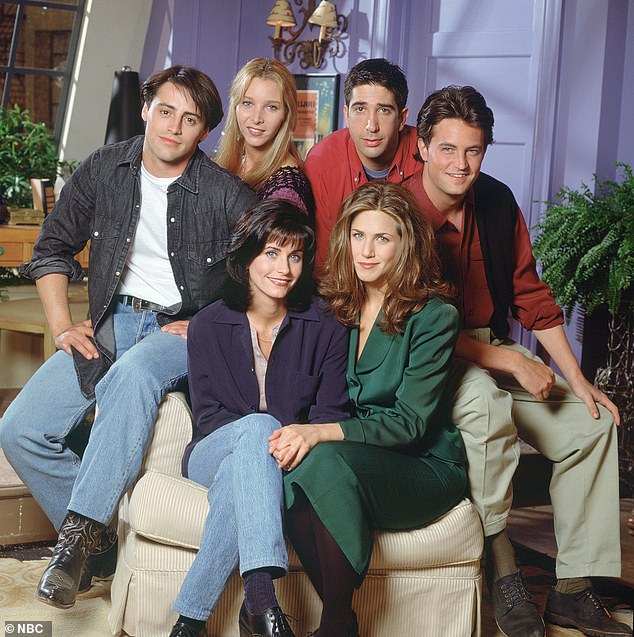 Asked if he will be Ross or David in the reunion, he said: ‘I’ll be David. Nothing is scripted and we are not in character.

‘We are all ourselves, although there is one section of it that I don’t want to give away, but we all read something.’

He then jokingly added: ‘I should have genned up on old episodes, but I just haven’t been able to bring myself to catch up on the 236 shows. I guess I need to watch a lot over the next five days!’

His interview comes after a new detail concerning the highly-anticipated and much-delayed Friends ‘reunion’ was teased by the sitcom’s original set decorator. 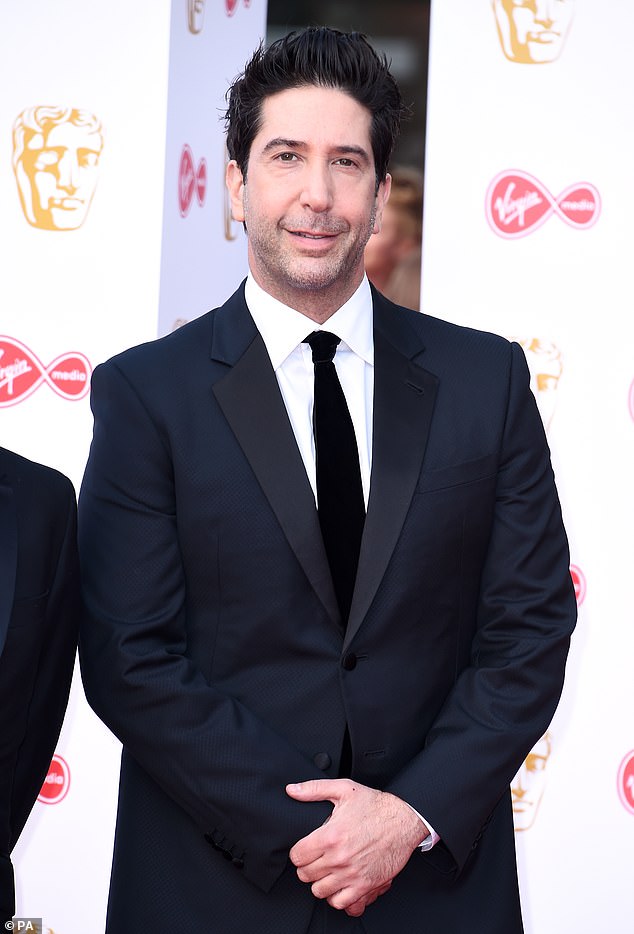 Getting into character? David Schwimmer has hinted that he and his Friends co-stars may briefly revive their characters when they get together onscreen

Greg Grande – who was responsible for dressing the likes of Central Perk and the apartments in the sitcom – took to Instagram on Wednesday, seemingly confirming that the reunion show will take place on a resurrected set of Monica Geller’s home.

While Greg was responsible for the knickknacks in Monica’s home, the set was designed by John Shaffner and Joe Stewart – who were also responsible for painting the walls purple.

The reunion is not set to be a scripted continuation of the sitcom, but a sit-down chat with the six lead cast members. 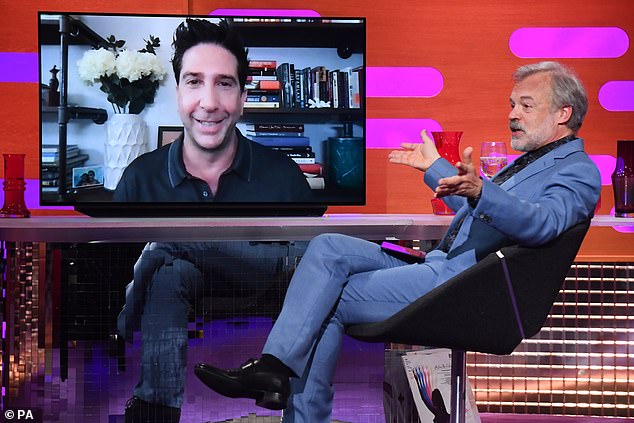 Interview: During an appearance on The Graham Norton Show, which is set to air on Friday night Schwimmer confirmed that he will not be in character for much of the reunion

Friends’ final episode aired in the spring of 2004, and saw Monica and husband Chandler Bing pack up the famously purple loft and move out to the suburbs with their newborn twins.

When the show wrapped, the set was taken down. It had lived on Stage 24 at the Warner Bros lot in Hollywood for a decade, but was taken over in 2005 when spin-off series Joey was filmed there.

Joey lasted only two seasons before it was cancelled due to lacklustre ratings, with fans uninterested in a show that only focused on one of the six friends.

Central Perk’s set is still in tact at Warner Bros, and is part of the studio tour.

The real coffee house soundstage – not a replica – can be visited when the tour is open to the public [currently shut amid the pandemic].

In 2019, Greg reflected on the details of Monica’s apartment in an interview with Entertainment Weekly.

‘I felt like Monica’s apartment was pretty iconic. Monica’s was definitely the standout,’ he said.

”[The Warner Bros] prop house had some exceptional old pieces of furniture that had been around forever and ever and ever that were kind of tucked away and hidden in the basement and the third floor. Pieces that no one really would ever have used unless you reinvented them.’

Greg explained in the interview that some of the items – including the French circus poster hanging behind Monica’s television – were last-minute additions that he didn’t think twice about. 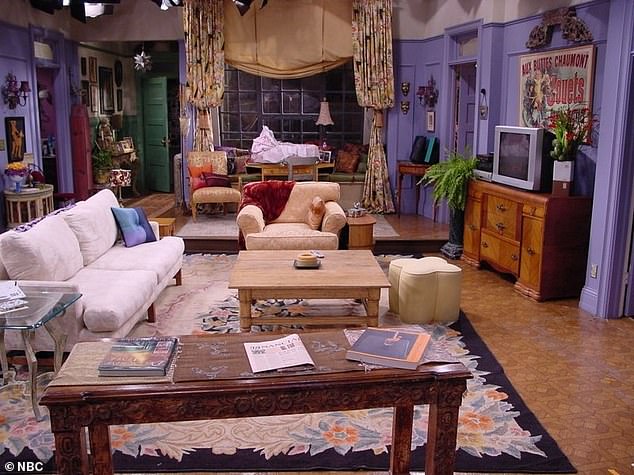 Deconstructed: Friends final episode aired in the spring of 2004, and saw Monica and husband Chandler Bing pack up the famously purple loft and move out to the suburbs with their newborn twins 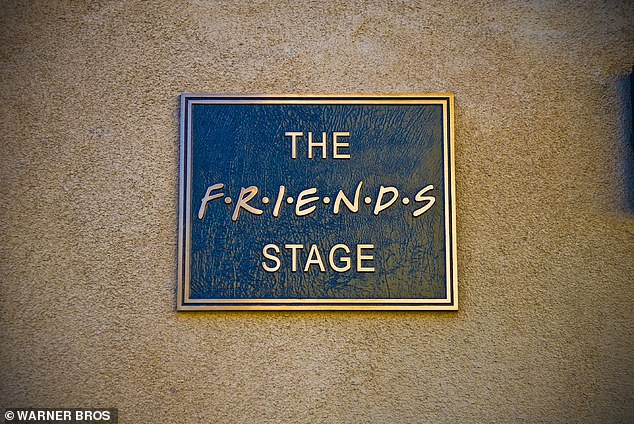 Stage: In reality, the set was taken down. It lived on soundstage 24 at the Warner Bros lot in Hollywood for a decade, but was taken over in 2005 when spin-off series Joey was filmed there

‘It’s funny that the way it happened was so natural and kind of not thought-out too much and now it’s an iconic poster.

‘It is really crazy and it’s awesome to think that I put such a fingerprint on that show — and it’s really sad that I can’t get any piece of the action!

‘Somebody owes me, for God’s sakes! It’s funny because I did pitch them a whole furniture line after the show but they didn’t want it.’

Greg appeared in the finale of Friends as one of the removal men, wheeling Chandler’s dog statue out of the apartment.

‘That rings true, that I’m moving the last piece of furniture out of the apartment. I got a little sentimental,’ he said. 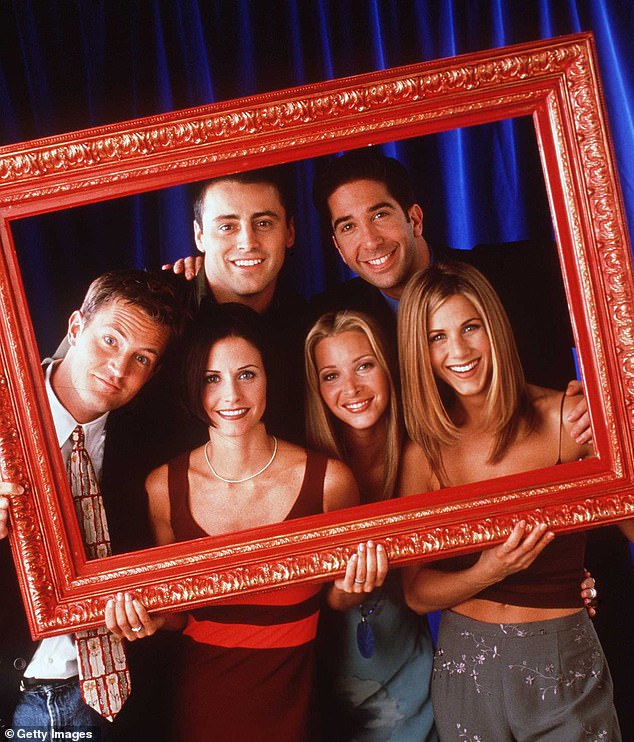 Six-some: The reunion is not set to be a scripted continuation of the sitcom, but a sit-down chat with the six lead cast members

David Schwimmer was the last cast member to update fans on the progression of the reunion show.

David – who played Ross Geller – said in early March that he will join his former co-stars to tape the reunion ‘in a little over a month’ during a chat on SiriusXM’s Andy Cohen Live.

‘Actually, in a little over a month I’m heading out to LA,’ the actor responded. ‘So, finally, I mean, we figured out a way to film it safely and there’s going to be a portion of it that we filmed outside because of, you know, for safety protocols.’

Andy then inquired about rumours that the event was going to be hosted by Ellen DeGeneres – who was embroiled in a toxic workplace scandal in 2020 regarding the set of her eponymous talk show.

Ellen starred in her own sitcom – Ellen – around the same time as Friends, and often made references to the fact they both had coffee house settings.

‘Is Ellen hosting that?’ Cohen asked, to which Schwimmer replied with a quick ‘no’.

‘She’s not?’ Andy said, pushing the star to give more details. ‘Do you know, can you say who is?’

‘You know what, I don’t know if I can actually,’ the star said. ‘Yeah. Should’ve found that out. Um, all right. It’s not Ellen, it’s not Billy Crystal. I could tell you who it’s not.’

Deflecting, David asked: ‘Andy is it you?’ ‘Oh my God. I wish it was,’ the broadcaster responded. 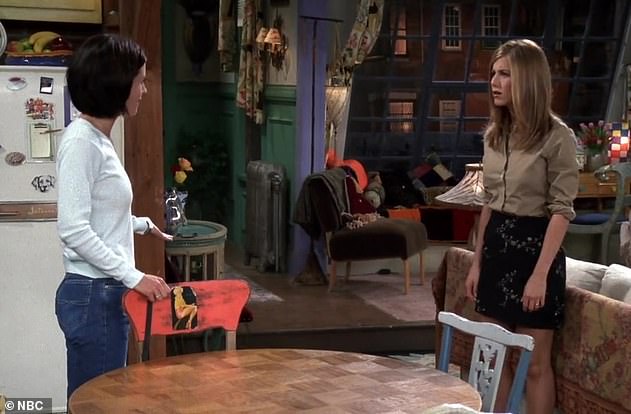 Postponed: Originally, the reunion was supposed to debut May 2020 as part of HBO Max’s launch but after the COVID-19 pandemic arrived, production plans were scuppered

The special event has been in the works since February 2020 with a film date of March 2020.

Originally, the reunion was supposed to debut in May 2020 as part of HBO Max’s launch but when the COVID-19 pandemic arrived, causing chaos in the film and TV industry, production plans were scuppered.

HBO Max announced in April of last year that the show would not be filmed in time to debut at the streaming service’s launch and the sit-down was pushed back to August 2020.

As the pandemic raged, that date was also abandoned. Matthew Perry tweeted in November that the taping was officially rescheduled for March but even that date was delayed according to the latest from Schwimmer.

‘Friends reunion being rescheduled for the beginning of March. Looks like we have a busy year coming up. And that’s the way I like it,’ Perry wrote at the time.

Fans have oftentimes called for there to be a scripted reunion in which the cast return as their characters for a one-off special. Yet the prospect of this appears to have been nixed by the series’ creators.

Sitcoms such as Will & Grace and Roseanne [later becoming The Connors] were revived in recent years to much fanfare, and Frasier is the latest said to be going through a reboot.

Yet Friends seems destined to be left as it was, in 2004, with only reruns keeping the fans satiated.