She will survive! Gloria Gaynor goes VIRAL as she starts a hand washing challenge to her iconic 1978 disco hit to help prevent the coronavirus

Gloria Gaynor has gone viral after starting a hand washing challenge to her iconic song I Will Survive in a bid to help prevent the coronavirus.

The disco queen, 76, took to TikTok and Twitter on Thursday to share a 20-second video of herself washing her hands while singing the classic 1978 track.

Gloria captioned the clip on TikTok with ‘it only takes :20 seconds to “SURVIVE!”‘ and added the hashtags ‘#WashYourHands #IWillSurviveChallenge’ on Twitter. 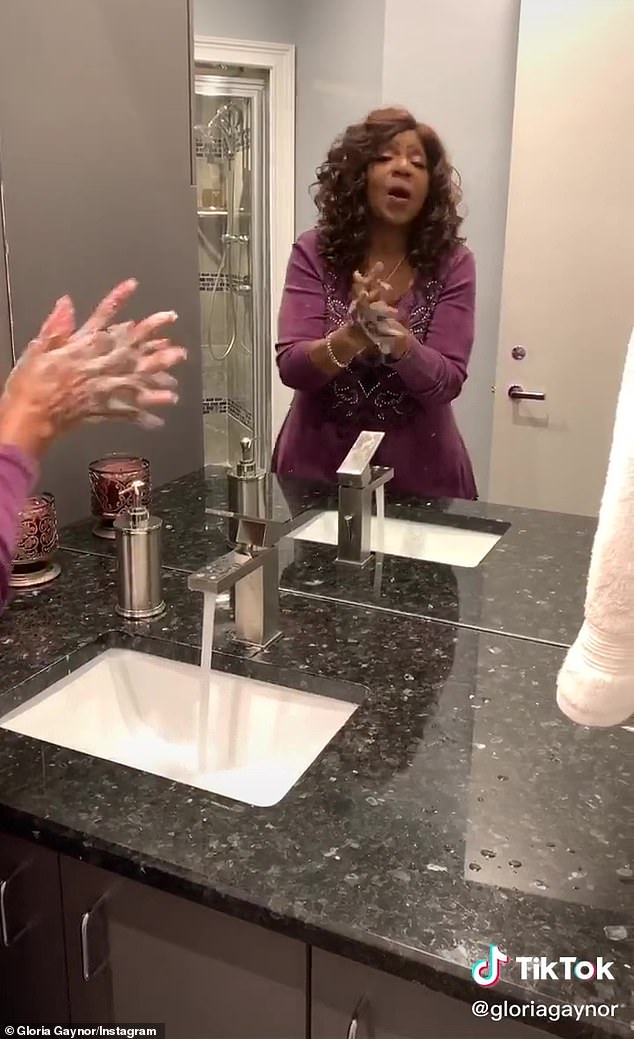 I Will Survive! Gloria Gaynor has gone viral after starting a hand washing challenge to her iconic song I Will Survive in a bid to help prevent the coronavirus

The video has already gone viral with nearly 1 million views on Twitter and fans have been tweeting the star’s #IWillSurviveChallenge from around the world.

In the video, the singer wears a maroon dress with gold detailing as she washes her hand in the sink while singing along to her greatest hit.

Washing hands is said to be one of the best ways to prevent the spread of the Coronavirus, with Gaynor helping in her unique way. 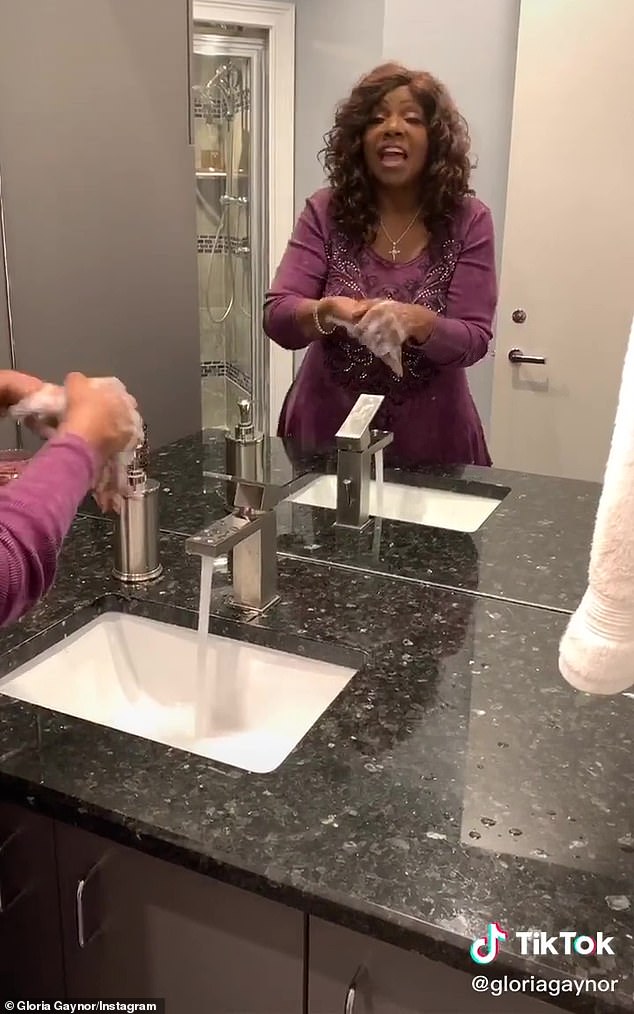 20 seconds: The disco queen, 76, took to TikTok and Twitter on Thursday to share a 20-second video of herself washing her hands while singing the classic 1978 track 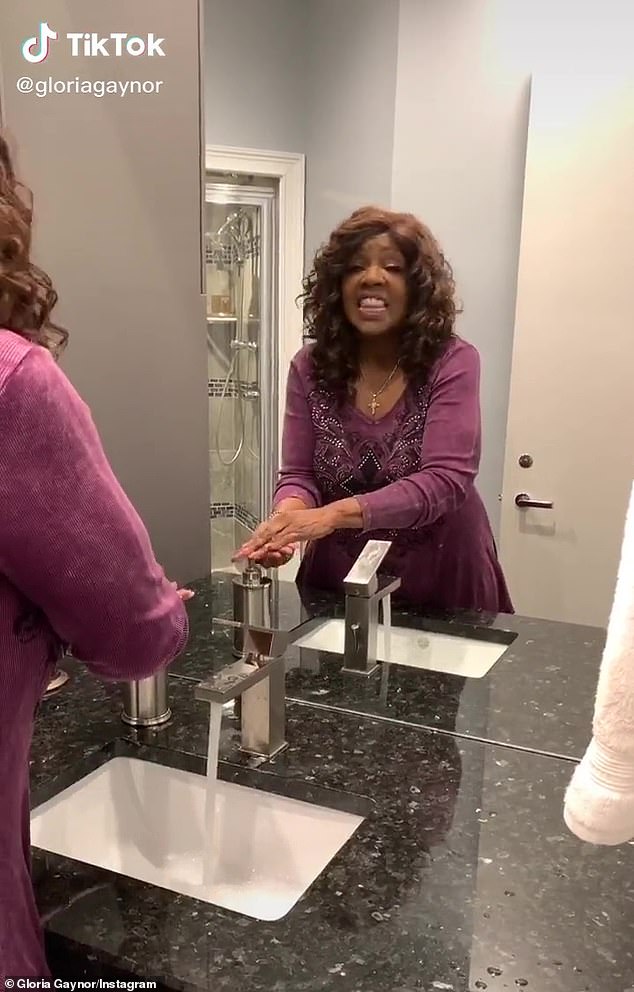 Big hit: Gloria captioned the clip on TikTok with ‘it only takes :20 seconds to “SURVIVE!”‘ and added the hashtags ‘ #WashYourHands #IWillSurviveChallenge’ on Twitter

Fans have praised Gloria for her hand washing challenge in a bid to prevent the coronavirus and took to Twitter to share their thoughts.

One person said: ‘Gloria Gaynor’s handwash song is super appropriate. What a legend! #IWillSurvive This is a video the world needs.’

A different user put: ‘The best thing on Twitter yet… @GloriaGaynor rocks.’

Another follower commented: ‘Gloria Gaynor washing her hands is the best thing ever.’ 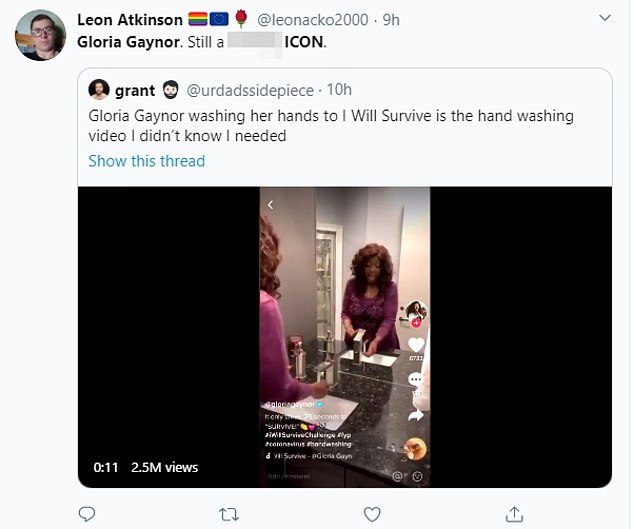 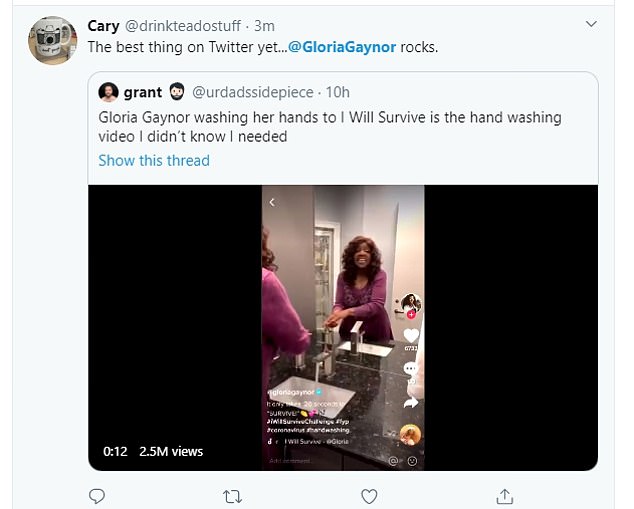 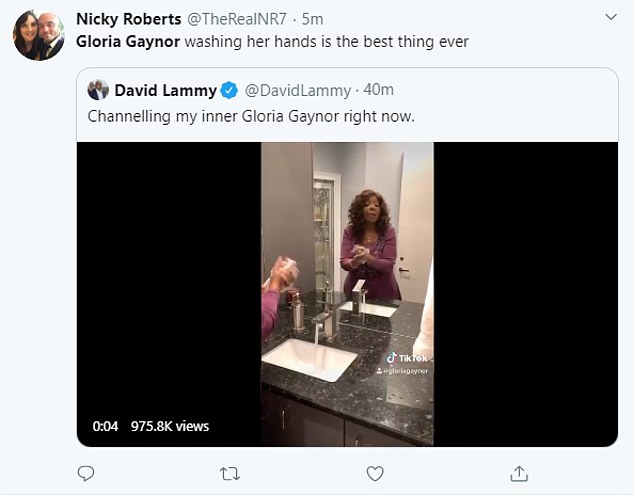 Legend! Fans have praised Gloria for her hand washing challenge in a bid to prevent the coronavirus and took to Twitter to share their thoughts

Gaynor’s hit I Will Survive was initially released as a B-side track on her 1978 album Love Tracks, but the song kept climbing up the charts.

The song sold more than 14 million copies within the first two years of release alone, and it was certified platinum by the Recording Industry Association of America.

She released albums regularly throughout the 1980s, including the 1984 party track I Am What I Am which is considered a gay anthem. 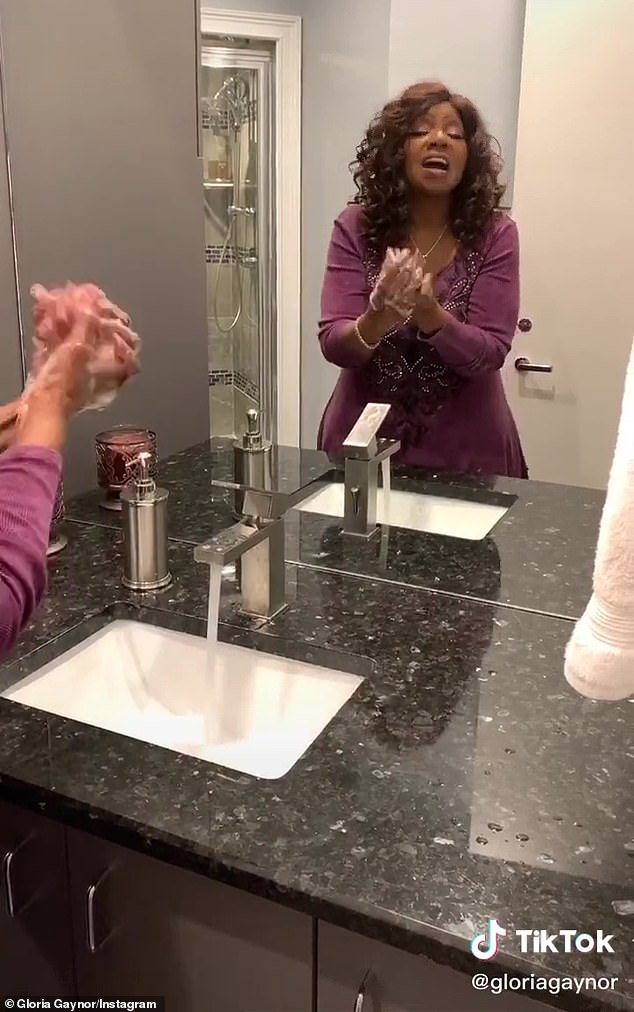 Impressive: The video has already gone viral with nearly 1 million views on Twitter and fans have been tweeting the star’s #IWillSurviveChallenge from around the world 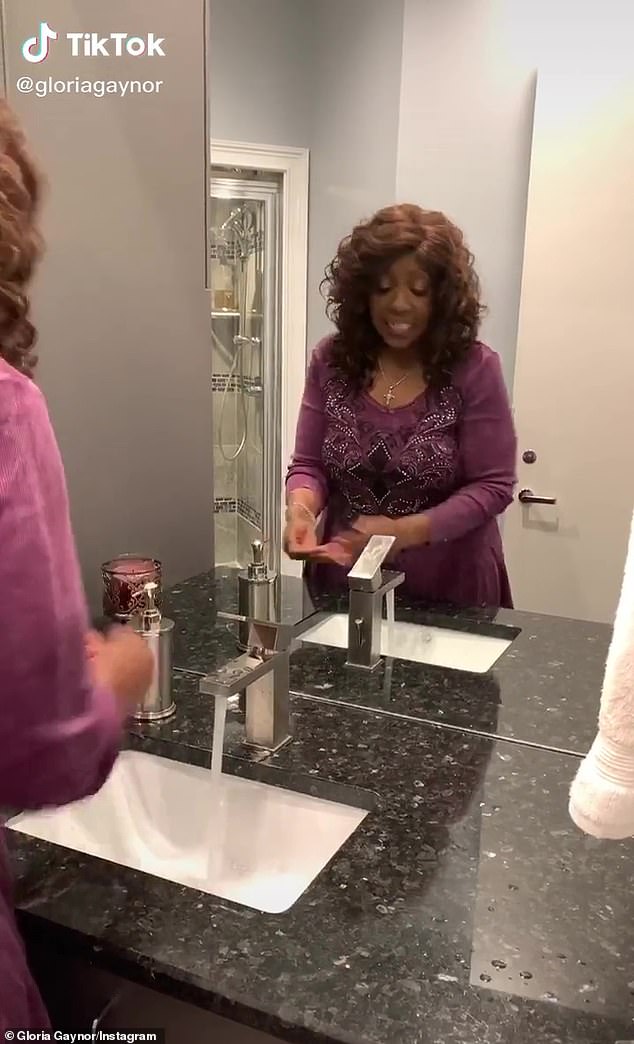 Disco queen: In the video, the singer wears a maroon dress with gold detailing as she washes her hand in the sink while singing along to her greatest hit

There have also been several successful remixes of I Will Survive by various artists including Diana Ross and the rock band Cake.

She won a Grammy in 1979 for I Will Survive, and while she continued to record throughout the 90s and the 2000s, she received her second Grammy in January.

The album was released in June 2019, peaking at the fourth spot at the US Top Gospel Albums charts. There is no indication yet that Gaynor is working on a new album quite yet.

It comes after actor Tom Hanks and his wife Rita Wilson tested positive for the novel coronavirus, they revealed on Wednesday night.

The Forrest Gump actor and his wife, both 63, announced the positive test results on Instagram urging the public to ‘take care’.

The couple are currently in Gold Coast, Australia where the Oscar winner is filming an untitled Baz Luhrmann-directed Elvis Presley film produced by Warner Bros. 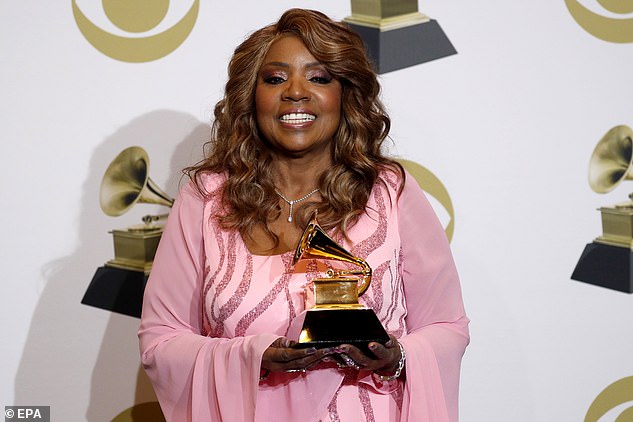 Hanks revealed he and his wife experienced symptoms including the common cold, body aches and chills before they decided to get tested.

President Donald Trump announced Wednesday that he was ordering an immediate shut-down of all travel from Europe to the United States from midnight on Friday to try to stop the spread of coronavirus in the US.

‘We will be suspending all travel from Europe to the United States for the next 30 days,’ Trump announced, conceding that world health officials had now declared the health crisis a pandemic after insisting for days that it would ‘go away’ and urging Americans not to panic.

The ban will apply to travellers who have visited 26 countries in the EU’s Schengen border-free area in the last 14 days, but not travellers from the UK or Ireland, or to US citizens, American permanent residents and their immediate family members.

Vice President Mike Pence said on Thursday morning that all Americans returning from Europe would be asked to quarantine when they return. 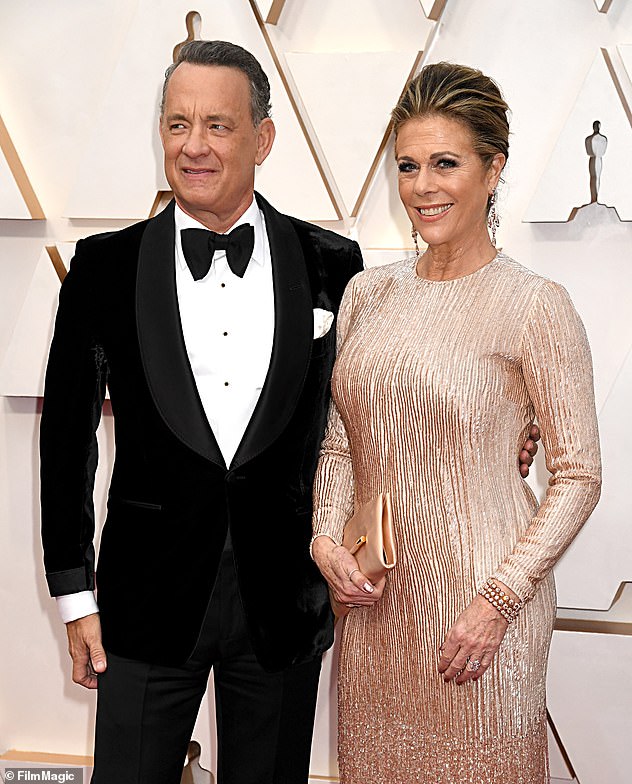 Confirmed: It comes after actor Tom Hanks and his wife Rita Wilson tested positive for the novel coronavirus, they revealed on Wednesday night (pictured in February at the Oscars)

Everything you need to know about coronavirus

By Natalie Rahhal, Acting US Health Editor for DailyMail.com

HOW DANGEROUS IS CORONAVIRUS?

About 14 percent of people who contract the Covid-19 coronavirus are taken to hospital – with severe symptoms including breathing problems and pneumonia. About 5 per cent need intensive care.

But the majority who get the virus suffer nothing more than a cough and may never know they are infected.

So far, some 51,000 people around the world have already recovered from coronavirus – and that just includes the numbers who received a diagnosis.

HOW MANY PEOPLE DIE?

Officially, the death rate so far has been just over three percent. But experts believe the true mortality rate is probably between one and two percent. This is because most mild cases have not been picked up by doctors or reflected in the official numbers – so the death rate is inflated.

HOW DOES THIS COMPARE WITH OTHER DISEASES?

Seasonal flu kills roughly 0.1 percent of people. So Covid-19 is between 10 and 20 times more fatal.

But it is far less dangerous than SARS – the virus that ripped across China in 2003 – which killed 10 percent of patients.

Yes, but not dramatically. The best estimates suggest every person with Covid-19 passes it on to 2.6 people, on average. For flu that number is 1.5.

CAN IT BE SPREAD WITHOUT SYMPTOMS?

Initially scientists feared carriers who had no symptoms could pass it on. That is now in doubt.

What is likely, however, is those who have mild symptoms are putting it down to a cold and going about their normal lives – which puts others at risk.

HOW LONG IS IT BEFORE SYMPTOMS APPEAR?

Again, unclear. Initially scientists said this could take up to two weeks.

But recent evidence suggests the incubation period could be as long as a month – particularly among children.

The average, however, is much shorter. A Chinese study said the average period of symptom onset was 5.4 days for adults and 6.5 for children.

WHO IS AT RISK?

The virus can affect anyone – with a study of the first 41 infected people revealing two thirds did not suffer from any pre-existing condition. But the middle-aged are most likely to get it – 78 percent of those infected in China have been aged 30 to 69.

WHAT ABOUT THE OLD?

WHO ELSE IS VULNERABLE?

Those with other conditions – such as diabetes, heart disease, high blood pressure and kidney problems – are likely to suffer severe complications if they become infected.

Children seem to be low-risk. Less than 1 percent of the Chinese cases have been under the age of ten – and if children do get the virus it’s often a mild form.

They do, however, retain the virus for longer than adults.

A study last week found the virus was still present in the stools of some children for a month after they contracted it.

Men are marginally more likely to get the virus than women. It is not clear why this is.

HOW DO DOCTORS TEST FOR COVID-19?

Anyone who has symptoms –particularly if they have travelled to an at-risk area – are told to call ahead to their health care provider, local emergency department or clinics.

This way, health care providers can be prepared, wearing masks, gloves and other personal protective equipment when they meet the possible patient and escort them to isolated areas of the facility.

They are tested using a cheek swab which is sent off for analysis at one of 12 Public Health England labs, a process that takes between 24 and 48 hours. Any positive test is double-checked at the main PHE lab in Colindale.

WHAT TREATMENT DO PATIENTS GET?

There is little doctors can do to tackle the virus, but they can treat the symptoms – such as fever and respiratory problems. Antivirals and antibiotics are also used, mainly to keep secondary problems at bay.

In the most serious cases patients are put on life-support equipment.

There are several clinical trials for potential coronavirus treatments ongoing worldwide, including one in Nebraska, where at least 13 patients are in quarantine, including two in biocontainment units.

WHAT ABOUT A VACCINE?

Even though the Wuhan virus appeared only a few weeks ago, 20 teams around the world are already manufacturing vaccines.

Chinese authorities provided the DNA code for the virus early on in the outbreak, enabling scientists to get to work straight away.

At least 30 companies and research institutions in the US are racing to make a vaccine.

Last week, one of these companies, Moderna, shipped its candidate vaccine to the US, signalling the shot was ready to begin clinical trials.

Even so, US health authorities say it will likely be upwards of a year before a vaccine is actually ready.