And the 37-year-old yoga Instructor provided her following with some insight into the family’s hectic household as she shared numerous snaps and videos to Instagram on Tuesday.

For one shot, Hilaria can be seen with a glass of wine in hand as she pumped breastmilk for her two newborns, while Alec, 62, happily tackled the family’s dishes. 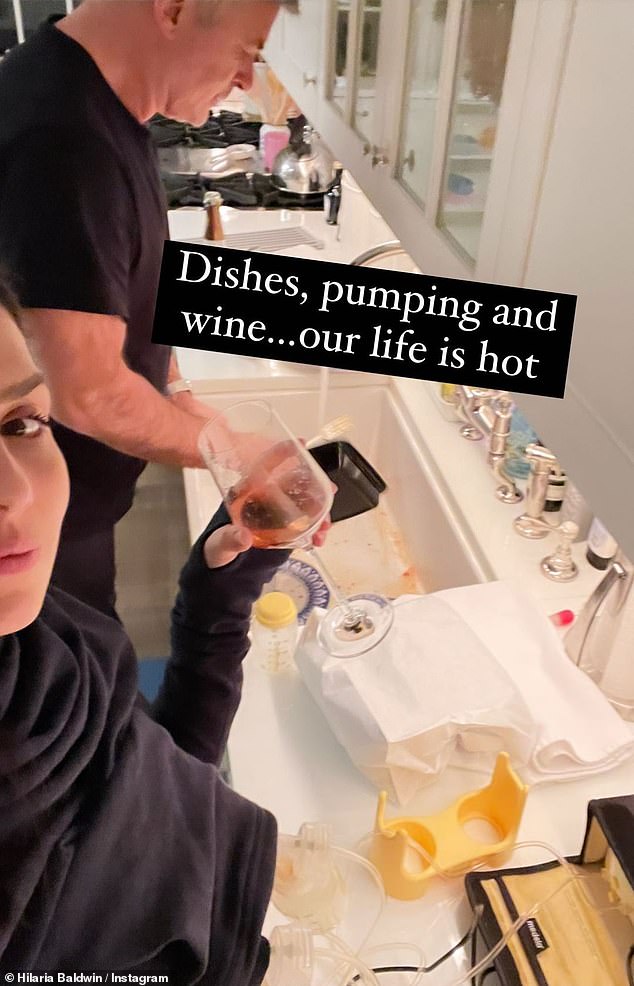 Parenthood: Hilaria Baldwin provided her following with some insight into the family’s hectic household as she shared numerous snaps and videos to Instagram on Tuesday

‘Dishes, pumping and wine… our life is hot,’ she captioned the shot, before poking fun at the size of their seemingly ever growing family.

As the setup for her self deprecating joke, Hilaria snapped a photo of the couple’s eldest child, seven-year-old daughter Carmen, lining up her enviable collection of Barbie dolls in a row.

‘I think Carmen has more children than I do,’ wrote the Boston native.

For the initial post, Hilaria did not reveal Lucia’s identity, gender, or any details regarding her birth. 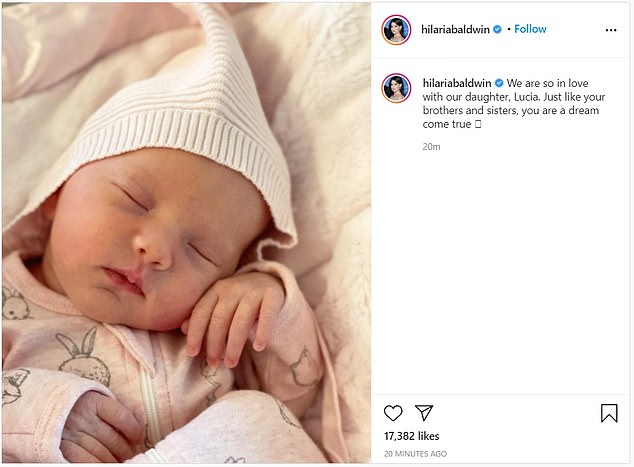 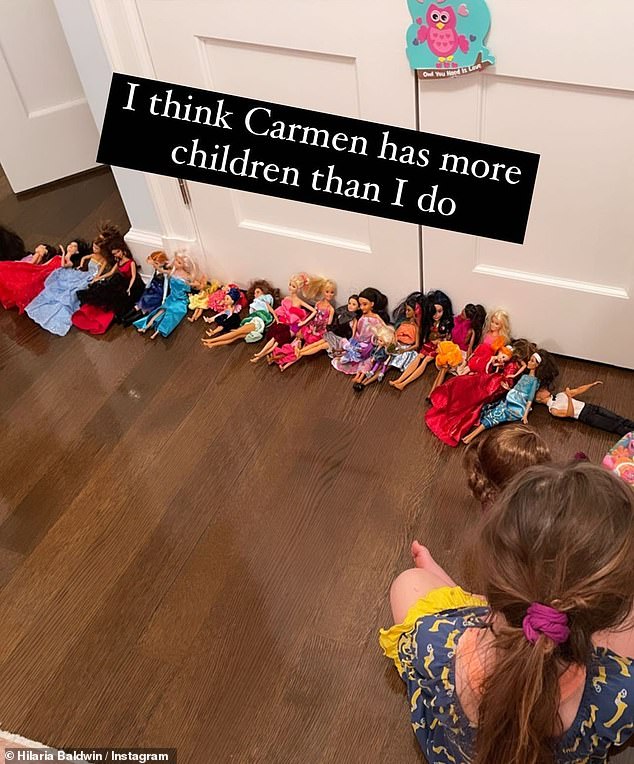 Poking fun: ‘Dishes, pumping and wine… our life is hot,’ she captioned the shot, before poking fun at the size of their seemingly ever growing family

Instead, she shared an image of herself cradling a newborn baby, alongside the couple’s five other children, Edu, Romeo,Leonardo, Rafael, and Carmen, with the caption: ‘7’

In a teasing post shared on her Instagram Stories, the proud mom also asked her followers to count ‘how many babies’ they could see in the photo, giving them the option of choosing ‘5’ or ‘6’.

Hilaria did not officially announce Lucia’s arrival until Tuesday, March 2, as she shared a snapshot of the newborn to her page.

‘We are so in love with our daughter, Lucia. Just like your brothers and sisters, you are a dream come true,’ she wrote, followed by a heart emoji.

In the sweet snap, Lucia can be seen donning a pale pink bunny-patterned onesie that matched her bedding and hooded baby blanket.

Lucia appeared to be sleeping soundly with one hand against her chubby cheek and the other on her chest.

Expanded brood? Hilaria and Alec Baldwin have welcomed a sixth child it has been claimed – just after the yoga guru shared an image of herself cradling a newborn with her five other kids

Newcomer: The 37-year-old, who gave birth to her fifth child Edu in September, is seen holding a tiny baby in her arms, however she shared little information about the child’s identity

Hint: Hilaria simply captioned the image ‘7’, referencing herself and the six children pictured, and revealed that the snap was taken by her husband Alec, 62

Lucia’s arrival remains particularly perplexing to many, being that Hilaria just welcomed her fifth child, son Eduardo in September 2020. It is not known whether Lucia was adopted or born via a surrogate.

Although Lucia is Alec and Hilaria’s sixth child together – the SNL star also has another daughter, 25-year-old model Ireland, with his ex-wife Kim Basinger.

As if tackling six children were not enough to keep him busy, Alec is also slated to star in the Herbert James Winterstern-directed action flick Supercell, according to Deadline.

As reported by the outlet Tuesday, the film will beginning shooting ‘this year on location in Montana and Georgia.’

Supercell will follow a ‘good-hearted teenager’ who has long set his sights on becoming a legendary storm chaser like his deceased father Bill Brody, who was tragically killed during a massive tornado.

Unfortunately, Brody’s legacy has been used to foster a ‘storm-chasing tourist business,’ which is controlled by the ‘greedy and reckless Zane Rogers,’ who is played by Baldwin.

‘(Baldwin), who is now using William as the main attraction to lead a group of unsuspecting adventurers deep into the eye of the most dangerous supercell ever seen,’ the synopsis concludes.

There is not set release date for Supercell at this time.

Hilaria shared her news in April 2019, when she took to social media to document her miscarriage in a series of very candid photos and videos, the first of which showed her posing in her underwear, alongside a caption which read: ‘I want to share with you that I am most likely experiencing a miscarriage.’

Hilaria went on to document subsequent doctors’ appointments, and even shared selfies from her D&C procedure.

In November of that same year, she revealed that she’d had a second miscarriage, four months into her pregnancy, once again sharing the news on Instagram alongside an image of herself and daughter Carmen.

Hint hint: Posting the image on her Instagram Stories, Hilaria teased followers by asking them to reveal ‘how many babies they see’

‘We are very sad to share that today we learned that our baby passed away at 4 months,’ she wrote. ‘We also want you to know that even though we are not ok right now, we will be. We are so lucky with our 4 healthy babies – and we will never lose sight of this.

‘I’m really devastated right now… I was not expecting this when I went to my scan today. I don’t know what else to say.’

The couple then announced that they were expecting their fifth child in April 2020, however the arrival of a sixth baby is not something that either have addressed publicly, although Hilaria stated in November of last year that it ‘felt very much’ like they were ‘done’ expanding their family.

‘It very much feels like we’re done,’ she told People one month after giving birth to Edu when asked if she was hoping to have more children.

However the wellness expert admitted that she would never say never, joking that she had thought she was ‘done’ in the past – only for the couple to decide that they wanted to expand their family further.

‘Everybody’s asking me this question,’ she continued. ‘I don’t know. I’ve said in the past that I was done when I wasn’t done.

‘I think, right now, I’m so tired. And I feel, just with COVID, it’s just insanity. Right now, during times of COVID, it very much feels like we’re done.’

She added that her children have all grown accustomed to ‘new siblings coming in’, revealing that they were already asking her ‘when the next one is going to come’.

Quiet: In the past, Hilaria (pictured while pregnant with Edu) has been open about sharing her motherhood journey on Instagram, posting images from throughout all her pregnancies

Candid: Hilaria even documented her two miscarriages on social media, revealing in April 2019 that she ‘was most likely’ losing her unborn child while sharing an image of herself in lingerie

Heartbreak: In November that same year, Hilaria suffered her second loss, and once again shared the devastating news on Instagram

But while Hilaria has previously been very open about her motherhood journey – documenting her pregnancy on Instagram, and sharing intimate details about both of her miscarriages – both she and Alec have kept the news of their youngest arrival very much under wraps.

Hilaria has only made a return to regularly posting on social media in recent weeks, after issuing an apology for faking her Spanish heritage following weeks of furious controversy over the scandal.

The influencer, whose real name is Hillary Hayward-Thomas, finally said ‘sorry’ for the saga in a post shared to her Instagram account on February 5 – six weeks after a Twitter thread about her faux European background went viral.

Hilaria stopped short of confessing she had misled people about her Spanish roots instead doubling down on her previous claims that she was raised ‘with two cultures, American and Spanish’ and that she feels ‘a true sense of belonging to both’.

In a caption alongside a photo of her with Alec and their five children, she wrote: ‘I’ve spent the last month listening, reflecting, and asking myself how I can learn and grow.

‘My parents raised my brother and me with two cultures, American and Spanish, and I feel a true sense of belonging to both.

‘The way I’ve spoken about myself and my deep connection to two cultures could have been better explained – I should have been more clear and I’m sorry.

‘I’m proud of the way I was raised, and we’re raising our children to share the same love and respect for both.

Nothing to see here! Since apologizing for her Spanish heritage scandal on February 5, Hilaria has shared regular family updates on Instagram – but didn’t share any hints about a new arrival

‘Being vulnerable and pushing ourselves to learn and grow is what we’ve built our community on, and I hope to get back to the supportive and kind environment we’ve built together,’ she said.

At the end of December, it emerged that Hilaria – who in the past claimed to have grown up in Majorca and spoke with a Spanish accent – actually spent her childhood in Beacon Hill, Boston, and went by Hillary.

It started with a single tweet on December 21 which read: ‘You have to admire Hilaria Baldwin’s commitment to her decade long grift where she impersonates a Spanish person’.

The woman then continued to post videos and proof of how Hilaria’s accent has changed over the years.

Several former classmates came forward to confirm that Hilaria was in fact raised in Weston, Massachusetts, by American parents without a hint of a foreign accent.

In the wake of the scandal, Hilaria took a break from social media and retreated to the Baldwins’ home in East Hampton, where she was staying with her children, while Alec was renting a nearby property so that he could quarantine away from his family and commute back and forth to the city for work.

Since apologizing for the scandal on social media, Hilaria has been sharing much more regular updates, frequently posting candid images and videos of life at home with Alec and the kids – however she made no hints that the couple were planning to welcome a sixth child into their brood.

On Wednesday, she shared a sweet video of herself working out alongside her son Edu, one day after posting a clip of them cuddling in bed, describing the tot as her ‘rainbow’ – a term used to describe a child born after a mother suffers a miscarriage.