Joe Gorga to Melissa: You Act Like We’re Not Even Married! 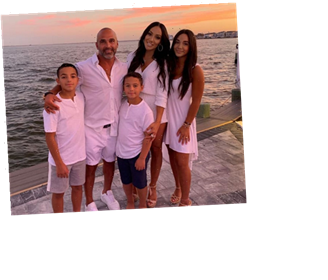 There was a time when Joe and Melissa Gorga’s marriage would have been considered the healthiest and most stable of all the relationshps on The Real Housewives of New Jersey.

Needless to say, those days are long gone.

Yes, the curse of RHONJ seems to have finally struck the Gorgas, and when it hit, it hit hard.

Fans have noted that it seems as though Joe wants a divorce from Melissa, and Wednesday’s episode of RHONJ only confirmed those suspicions.

The trouble began during a scene in which the Gorgas were enjoying a night out with other couples during a trip to the Jersey Shore.

After dinner, Joe became upset, alleging that Melissa didn’t wait for him so that they could walk to the car together.

“What are you mad about?” Melissa asked her husband of 16 years. “Did I do something wrong?”

“I would just like my wife to wait for me and you just walk away like you don’t even have a husband,” Joe said after joining his wife and two other couples in the car.

“From now on, you just go by yourself while I just walk in the back.”

This might seem like a pretty minor thing to gripe about — and it is — but Joe went on to reveal that there’s more to the situation than meets the eye.

“We used to be so attached and I’m still like that,” he said.

“She’s just changed. You turned into this different businesswoman.”

Yes, it quickly became clear that Joe was feeling insecure about the success of Melissa’s clothing boutique, Envy.

“If I have a little success in my personal life, it’s not against you,” said Melissa.

“Let your wife have a little something that’s my own. It doesn’t mean I don’t love you,” she continued.

“If it were up to him, I would just cook and clean and I’ll be here at four with your dinner,” she went on.

“Maybe we grew apart,” Joe told Melissa, seemingly ignoring everything she had to say.

“I’ve kissed your ass for how many f—ing years, so you sit home while I go to work now. You are so spoiled,” Melissa shot back.

“The problem is, she’s changed a little,” Joe explained to his friends once the group arrived back at the hotel.

“He has a very old school mentality,” Melissa told her party.

“When we started our marriage, I was 24 years old. I did whatever Joe told me to do. He was someone who was jealous. At the end of the day, I don’t want to feel guilt for achieving things that I want to achieve. He tells me that’s wrong.”

“When you get too much success, you become a different person. I call fame the devil. The devil comes into your soul and you forget who you really are,” Joe argued.

“I think you’re too involved with work,” he told his wife.

“You need to realize what’s happened to you.”

“I feel so bad when you say that,” Melissa replied. “What did I do wrong to you?”

Ouch. Clearly, Joe is the one who’s creating problems here, and he needs to swallow his pride and support his wife in her successful business venture.

That said, it makes sense that he would be a little wary of the perils of success and fame.

After all, he had a front row seat for the downfall of his sister Teresa Giudice, and her husband, Joe, who was deported to Italy after serving his sentence for tax fraud.

We doubt a similar fate will befall the Gorgas, but it makes sense that the possibility would always be at the forefront of their mind.