Heartbreak has struck the Jonas newlyweds. Joe Jonas and Sophie Turner are fresh off the heels of their honeymoon, but that newlywed bliss has been interrupted by the heartbreaking death of their pup, Waldo. The adopted pup was being walked in New York City when a passerby scared little Waldo, prompting him to run off. He was sadly hit by a car and killed when he ran off. RIP, Waldo! Jophie has now commemorated their little guy the best way they know how: tattoos. Joe Jonas and Sophie Turner’s matching tattoos of their late dog, Waldo, is a sweet tribute to the doggo.

TMZ reported on July 26 that Turner and Jonas’ second dog had died the day before. The couple had only welcomed Waldo Picasso (an Alaskan Klee Kai who was a littermate of their other dog, Porky) into the fold of their family a year ago when the horrible accident happened. Waldo had reportedly been taken out by a dog walker when the incident went down. A representative for Jonas told TMZ the whole ordeal was a "freak accident." TMZ also reported that Jophie apparently did a therapy session before reporting the incident on Friday, July 26.

On July 29, Jophie revealed on their respective Instagrams that they had gotten tattoos of Waldo’s cute little face to remember him by. It’s an amazingly derpy face, he had.

Jonas got his tattoo of Waldo on the front of his right forearm.

Turner got hers on the interior of her right forearm. 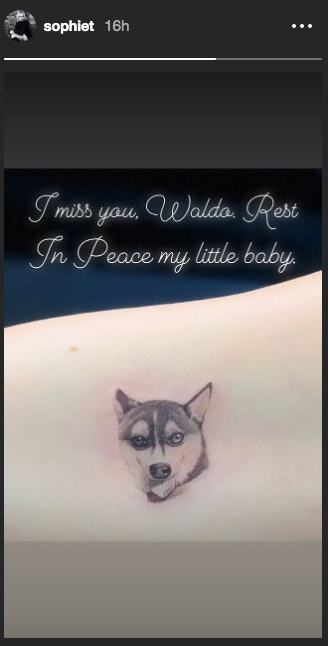 Jonas’ caption on his post read, "R.I.P. my little angel."

Turner’s photo, which she posted to her Instagram story, read, "I miss you, Waldo. Rest In Peace my little baby."

Those tattoos are… incredibly lifelike. Props to the artist! That artist, by the way, is Dragon — a tattoo artist who works at the Bang Bang NYC tattoo parlor. Bang Bang NYC has become known for its celebrity clientele. (Justin Bieber, Cara Delevingne, Kendall Jenner, Demi Lovato, and more celebrities have all gotten tattoos at Bang Bang.)

He posted a photo of him, Turner, and Jonas after giving them their new ink.

"@joejonas @sophiet Thank you so much guys. See you again!" he said in his caption, which started off with a man, woman, dog, and heart emojis.

Waldo Picasso Jonas was Jonas and Turner’s second dog. Their first is another Alaskan Klee Kai named Porky Basquiat Jonas. Both of them have their own Instagram accounts, although Porky’s hasn’t been updated since 2018 and Waldo’s only had one post, posted in 2018 as well. Jonas had gotten Porky as a surprise for Turner, then they later adopted Waldo as well, reuniting the two doggo brothers.

"I’d like to make an announcement," the caption from the April 16, 2018, post said. "Me, my parents and I have adopted my actual brother from the same litter. Please welcome my little brother @waldopicassojonas."

Waldo’s only Instagram post was a picture of Porky looking into the store window where Waldo was laying, captioned "Bruthuz."

Please excuse me while I ugly cry.