Jon Hamm and girlfriend Anna Osceola were spotted enjoying a low-key dinner date together in West Hollywood on Friday night.

The Good Omens actor, 49, and his former Mad Men co-star, 32, looked smitten as they departed the San Vicente Bungalow restaurant together.

Keeping safe amid the coronavirus crisis, the couple made sure to wear face masks as they departed the eatery and headed home after their night out. 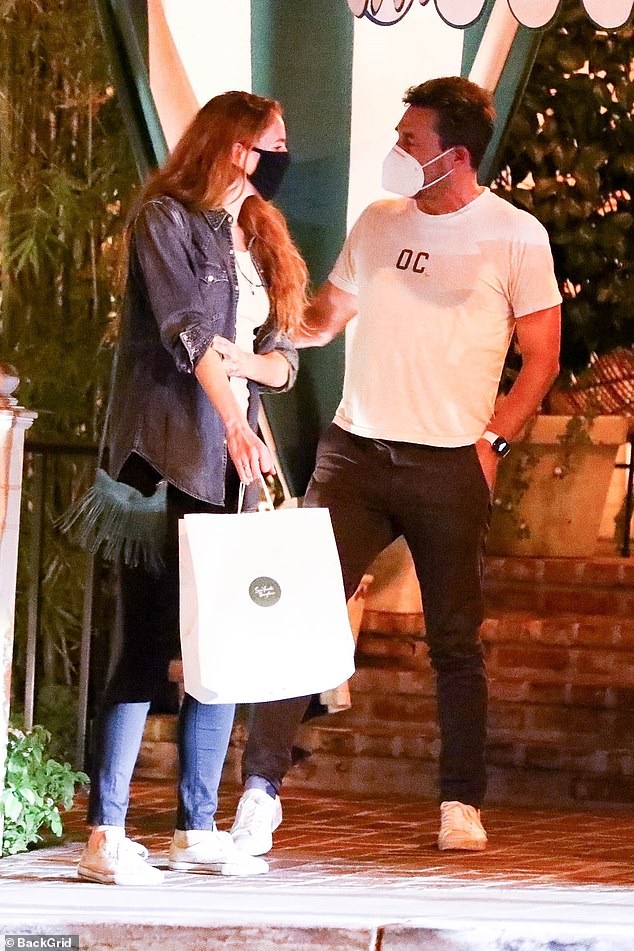 Jon kept things casual as he teamed a simple white t-shirt with a pair of black jeans and white trainers.

While Anna looked matched her partner’s style as she donned a black denim shirt over a white top and skinny jeans.

She completed her look by stepping out in white low-top Converse shoes, and she accessorised with a pendant necklace.

Anna’s auburn locks were brushed into loose waves that fell over her shoulders, and she appeared to wear a light palette of make-up. 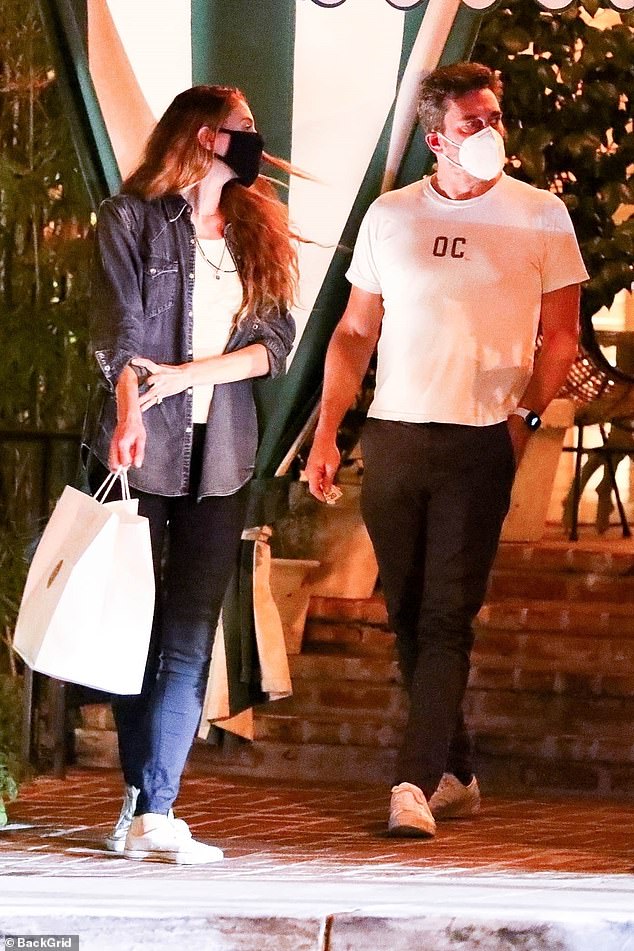 Couple’s clothing: Jon kept things casual as he teamed a simple white t-shirt with a pair of black jeans, while Anna matched his style in a denim shirt and plain top

The pair have sparked dating rumours for years, after the end of his 18-year relationship with Jennifer Westfeldt in 2015.

Jon and Anna are said to have forged a relationship when they spent California’s first COVID-19 lockdown together, five years after they met on the set of AMC’s famous drama series.

The rumoured couple were first seen out on a coffee date in 2017, and have since proved to maintain a close bond as they played tennis in May. 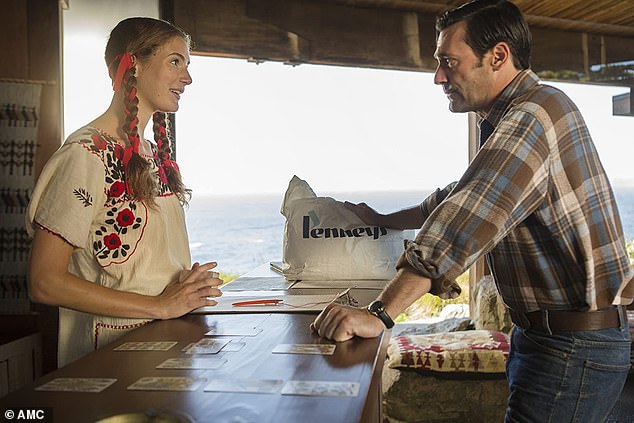 When they first crossed eyes: The screen star and the actress spent California’s first lockdown together, five years after they met on the set of the series (pictured)

According to US Weekly, the thespians sparked dating rumours earlier this year when they were ‘spotted together on multiple occasions’ during the coronavirus pandemic.

Their romance may come as a surprise to Mad Men fans as auburn-haired beauty Anna only played hotel receptionist Clementine in the show’s final episode.

Jon was last linked to SNL producer and Ben Affleck’s ex Lindsay Shookus late last year, with the publication claiming they enjoyed a ‘flirtatious’ evening at a Broadway show.

A source said in September 2019: ‘It did seem to be romantic between Jon Hamm and Lindsay Shookus. 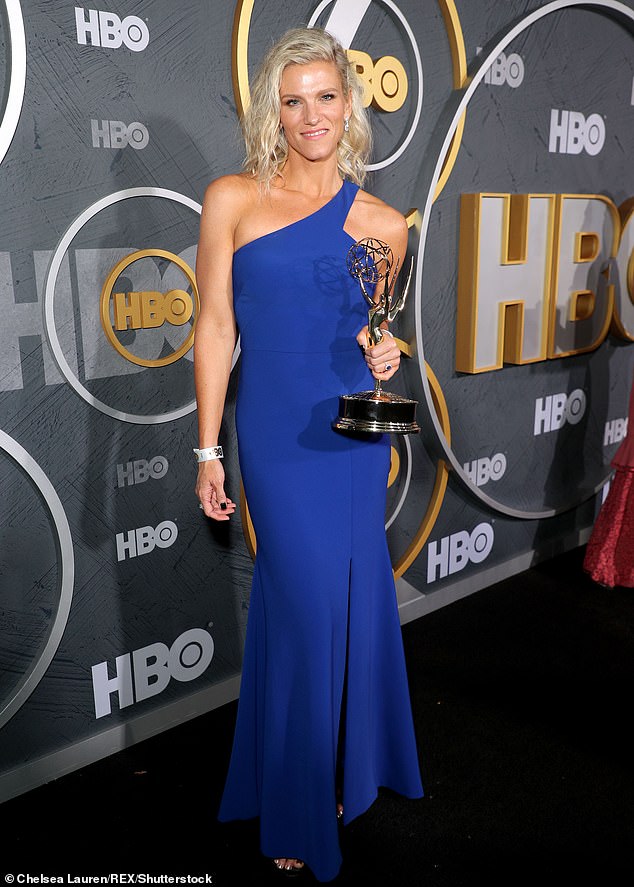 ‘They sat next to each other and would touch each other affectionately throughout the night. However, there was no PDA.’

Jon previously touched on his decision about not marrying his former partner, telling Woman Magazine: ‘We may not have a piece of paper that says we’re husband and wife, but after 10 years, Jennifer is more than just a girlfriend.

‘What we have is much deeper and we both know that. To me, people get married when they’re ready to have kids, which I’m not ruling out.’ 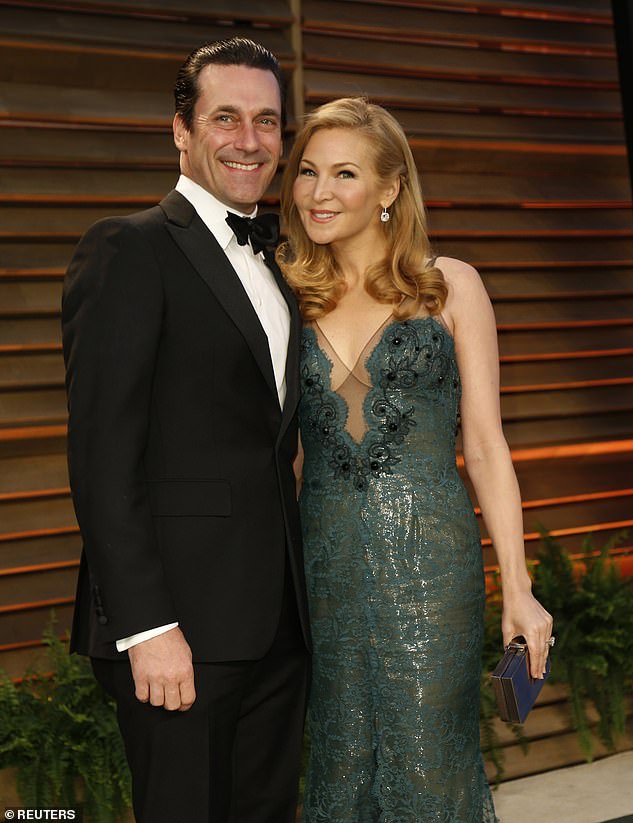 The ex files: The Space Cowboys actor was previously in a longtime relationship with Kissing Jessica Stein actress Jennifer Westfeldt from 1997 until 2015 (pictured in 2014)