There is no red carpet this year, but having nowhere to go, didn’t stop nominee Katie McGlynn getting all dressed up.

The Coronation Street actress, 27, looked breathtaking in a white lace and silk gown by designer Nadine Merabi as she posed for a glamorous online shoot by Rankin, 53, ahead of Friday night’s virtual TV BAFTAs ceremony.

Katie – who is nominated for a ‘must see moment’ for her role as cancer-stricken Sinead Tinker – wore the delicate dress, which featured a intricately beaded lace bodice and a high-low hemline as she lounged on her sofa, stairs and even her piano. 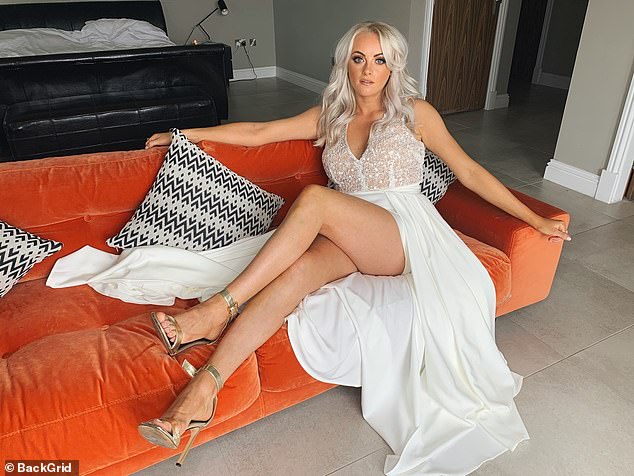 Glamour puss: Katie McGlynn, 27, looked breathtaking in a white gown as she posed for a glamorous online shoot by Rankin, 53, ahead of Friday night’s virtual TV BAFTAs ceremony

The soap star boosted her height with a pair of gold barely-there stilettos, and confidently paraded her toned pins during the photoshoot.

Her silvery blonde tresses were styled into dishevelled curls and her natural beauty was enhanced with a bronzed make-up look complete with dark smokey eyes.

Inside, Katie oozed vintage Hollywood glamour while posing for shots, but elsewhere seemed to view the photoshoot as an opportunity to give the lawn a quick trim.

She playfully matched her floor-length gown with gardening gloves while sitting on a ride-on mower. 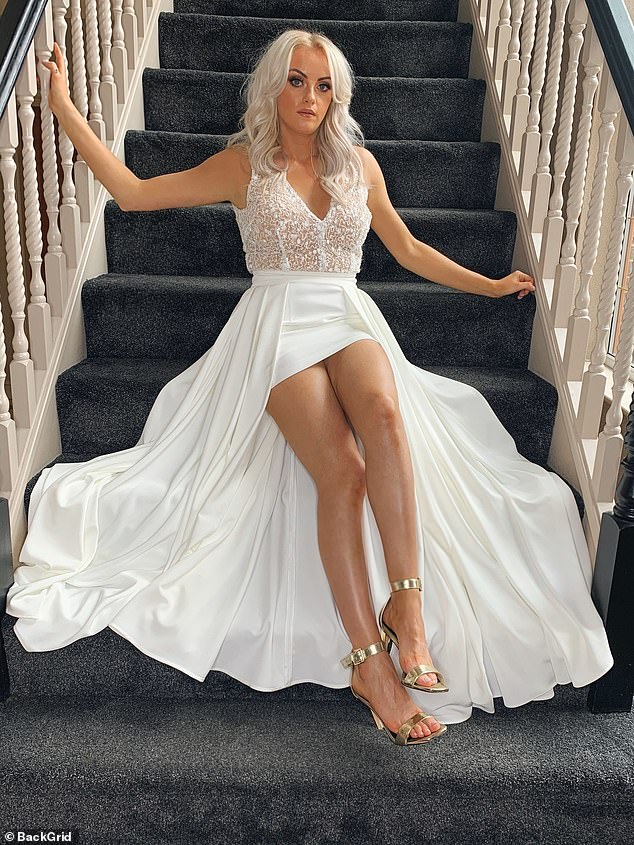 Sensational: The Coronation Street star wore the delicate dress by designer Nadine Merabi, which featured a high-low hemline as she lounged on her sofa, stairs and even her piano

Coronavirus restrictions meant it was all cleverly done with the famous snapper taking Katie’s portraits through a video call set up by the thespian in her home.

The BAFTA Virgin Media British Academy Television Awards, which were originally scheduled for 17 May, are being held in a closed studio after the original date was postponed due to the coronavirus outbreak.

Organisers confirmed at the time that following government advice they had opted to reschedule the ceremonies until later in the year.

The awards show is being held in a BBC studio and in accordance with government guidelines the ceremony will be socially distanced, with nominees accepting their prizes virtually. 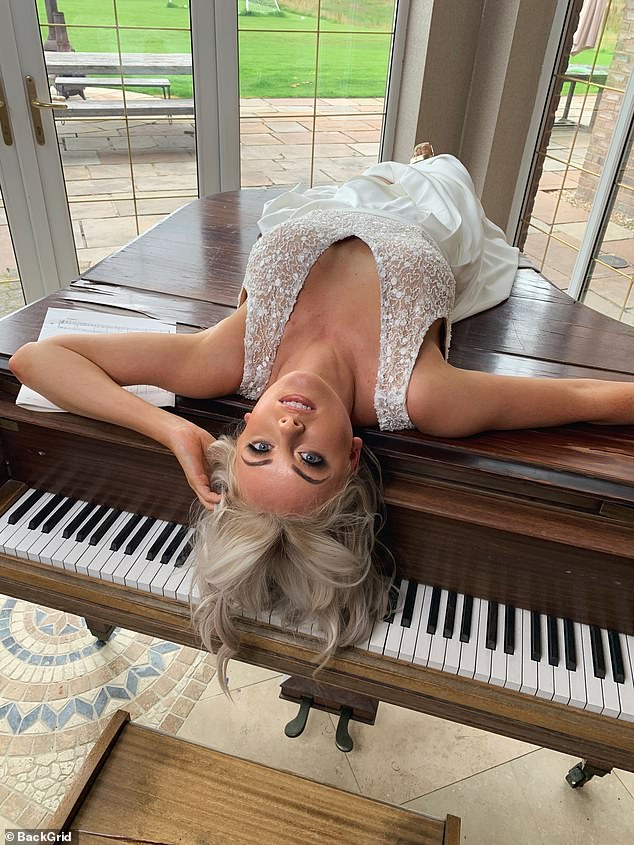 Wow! Katie – who is nominated for a ‘must see moment’ for her role as Sinead Tinker – styled her silvery blonde tresses into dishevelled curls and wore dark smokey eyeshadow

Making his debut as host of the all-star ceremony, actor and comedian Richard Ayoade will steer audiences through this years’ nominations, with nominees invited to get involved through video link-ups.

Richard, who has himself won a BAFTA, previously joked about hosting the socially distanced programme: ‘I am as surprised as you are that this is still going ahead.’

Earlier this month the full list of nominations for the BAFTA Television Awards 2020 were announced.

The shortlist was selected by an independent BAFTA-approved jury of media experts, with BAFTA Television Committee Chair Hannah Wyatt heading the group.

While the BAFTA Television Awards is typically a glitzy affair, winners will accept their awards from home, while presenters will appear live in the studio. 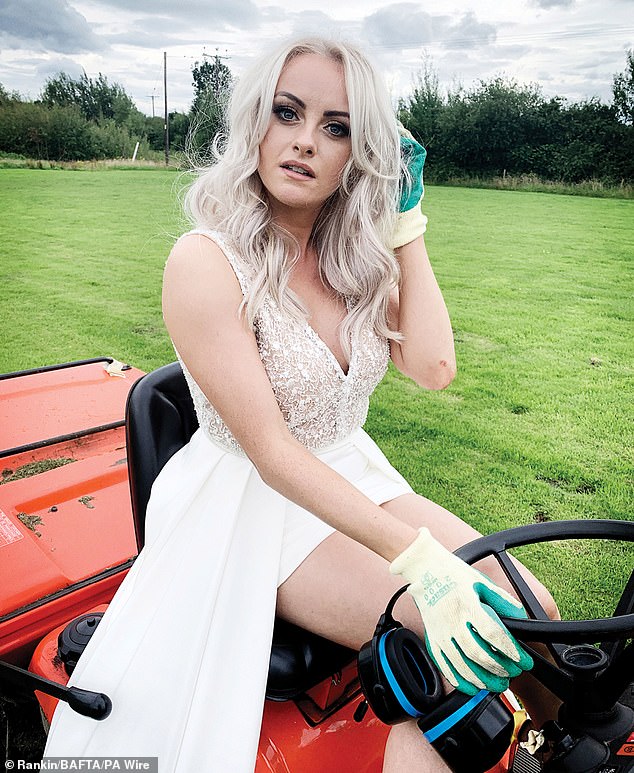 Location, location: Meanwhile, elsewhere Katie was photographed in an unexpected setting as she teamed her white lace dress with gardening gloves while posing on a tractor

Richard will also be joined virtually by some big names in television including Billy Porter, Chris O’Dowd, David Tennant, Jeff Goldblum, Kermit the Frog, Miss Piggy, Michael Sheen and Ruth Madeley, who will be presenting awards via video link.

Audiences will also be treated to two performances from internationally-acclaimed comedian, musician, actor and writer Tim Minchin, including an original song composed specially for the event.

British actor, writer and producer Idris Elba will receive the Special Award, one of BAFTA’s highest accolades, in recognition of his exceptional career and commitment to championing diversity and new talent in the industry. There will also be some very special surprise guests dialling in to present his award on the night.

The winner of the Virgin Media’s Must-See Moment Award will also be announced. As the only award to be voted for by the public, the Must-See Moment celebrates the dramatic scenes, cliff hangers and edge-of-your-seat moments that truly resonated with TV fans across the UK.

Elsewhere, BAFTA have responded to criticism of its lack of diversity by nominating three times as many BAME actors and performers as last year’s TV awards show.

Nine stars including Sex Education’s Ncuti Gatwa, The End of the F***ing World’s Naomi Ackie and comedians Guz Khan and Mo Gilligan are among those nominated for the individual awards. They make up around a third of all those nominated, a marked improvement on the three from last year.

BAFTA has come under fire for its lack of representation in both its film and TV award shows in recent years.

Tune in to the Virgin Media BAFTAs on Friday 31 July from 19.00 BST on BBC One

The Hunt For Jihadi John

Lee Mack for Would I Lie To You

Our Dementia Choir with Vicky McClure

The Misadventures of Romesh Ranganathan – WINNER

Joe Lycett’s Got Your Back

FEMALE PERFORMANCE IN A COMEDY PROGRAMME

When They See Us – WINNER

Stephen Graham for The Virtues

Callum Turner for The Capture

Samantha Morton for I Am Kirsty

MALE PERFORMANCE IN A COMEDY PROGRAMME

Victoria Derbyshire: Men who lost loved ones to knife crime

Race Across The World – WINNER

David Harewood: Psychosis and Me

The Left Behind – WINNER

8 Days: To The Moon and Back

Joe Absolom for A Confession

Josh O’Connor for The Crown

Will Sharpe for Giri/Haji – WINNER

Helen Behan for The Virtues

Helena Bonham Carter for The Crown

Naomi Ackie for The End of the F***ing World – WINNER

VIRGIN MEDIA’S MUST-SEE MOMENT (voted for by the public)