Kristin Cavallari tried to break the internet on Thursday by sharing a striking photo of herself while topless on a sailboat.

The 33-year-old newly single beauty had her naked back turned to protect her modesty but in doing so flashed her bottom which was almost fully on view thanks to a pair of white thong bikini briefs.

This arresting image comes just after the Very Cavallari star shared that she thought about divorcing Jay Cutler ‘every day’ for two years before they split this spring. 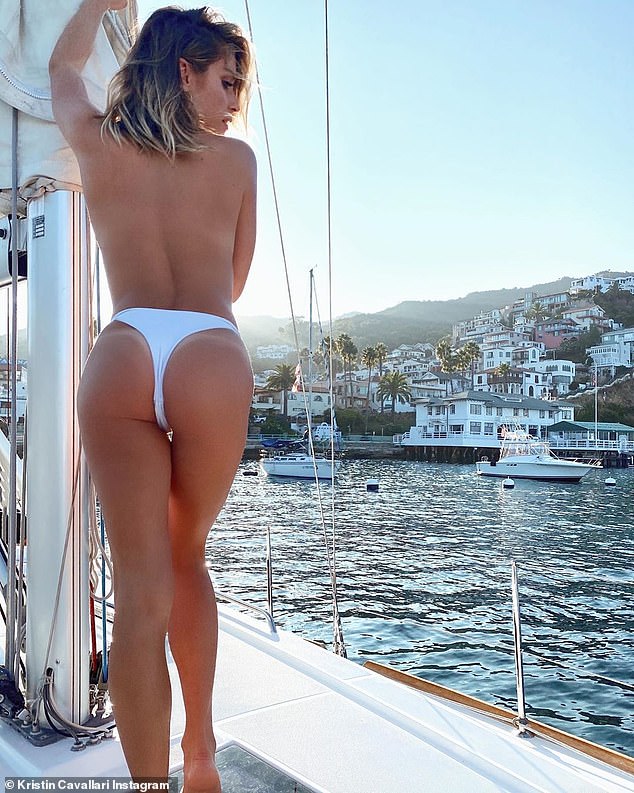 Bringing the heat: Kristin Cavallari tried to break the internet on Thursday by sharing a striking photo of herself while topless on a sailboat. The newly single beauty had her naked back turned to protect her modesty but in doing so flashed her bottom 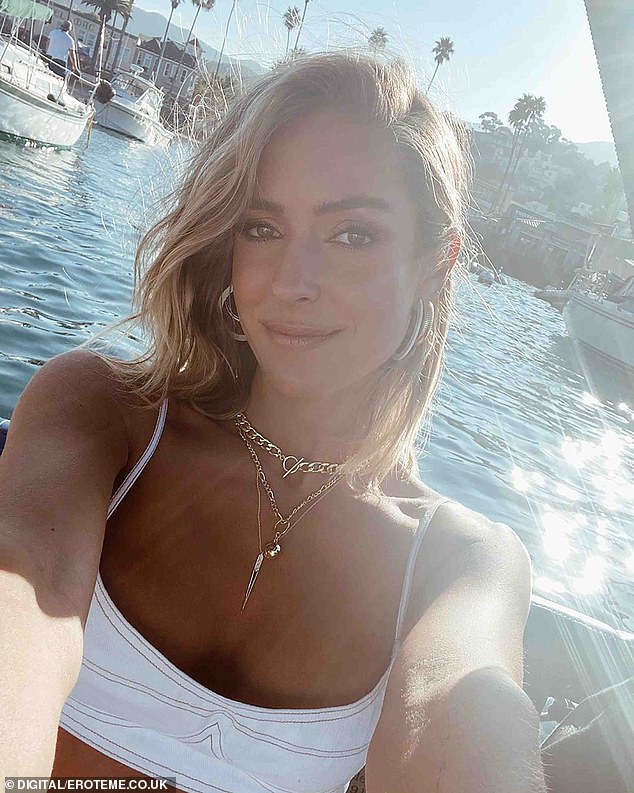 Lovely at sea: The photogenic wonder was seen in a bikini top as she took a selfie at sunset

In this new post, Kristin looked to the side as her wavy ombre hair was worn down. Her toned arms were holding on to a sail.

The cookbook author’s back was the focus as well as her bottom which showed tan lines beneath the thong straps.

One knee was pushed out as she balanced herself on the sailboat that had such a picturesque backdrop of a seaside town that it could pass for a screensaver.

‘Pretending it’s Positano,’ wrote The Hills veteran in her caption for her 4.1M followers. 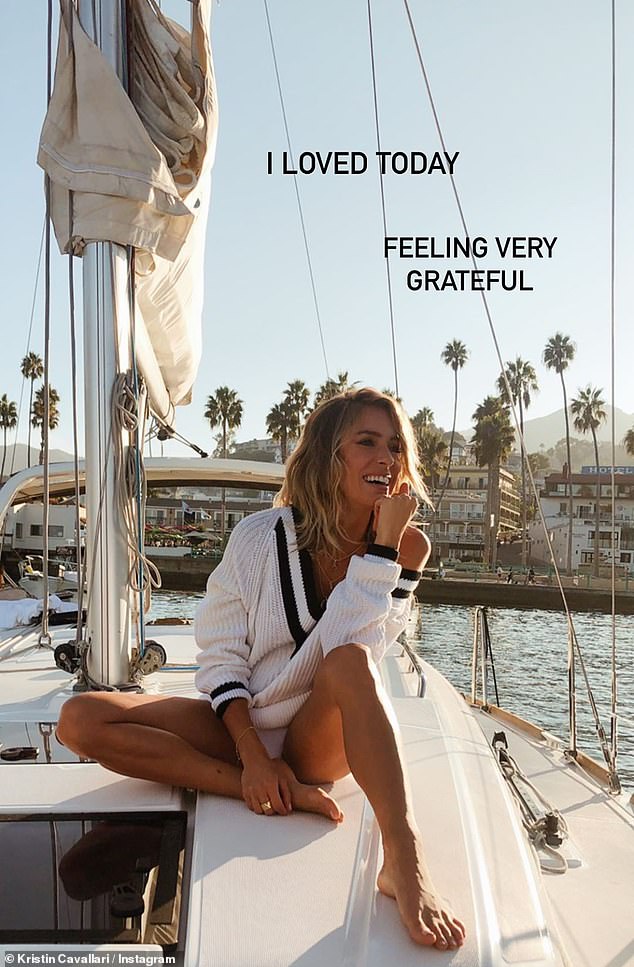 A great trip to Catalina: The looker added a blue and white sweater when she sat down 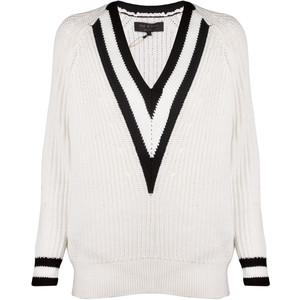 Positano is where she honeymooned with her ex Cutler in 2013.

The star has been seen on Catalina Island all week as she models new designs for her Uncommon James jewelry line.

She was also seen with a double ice cream cone as well as perched on a set of stairs.

This comes after she talked about leaving her husband of seven years, former football star Cutler, in April. 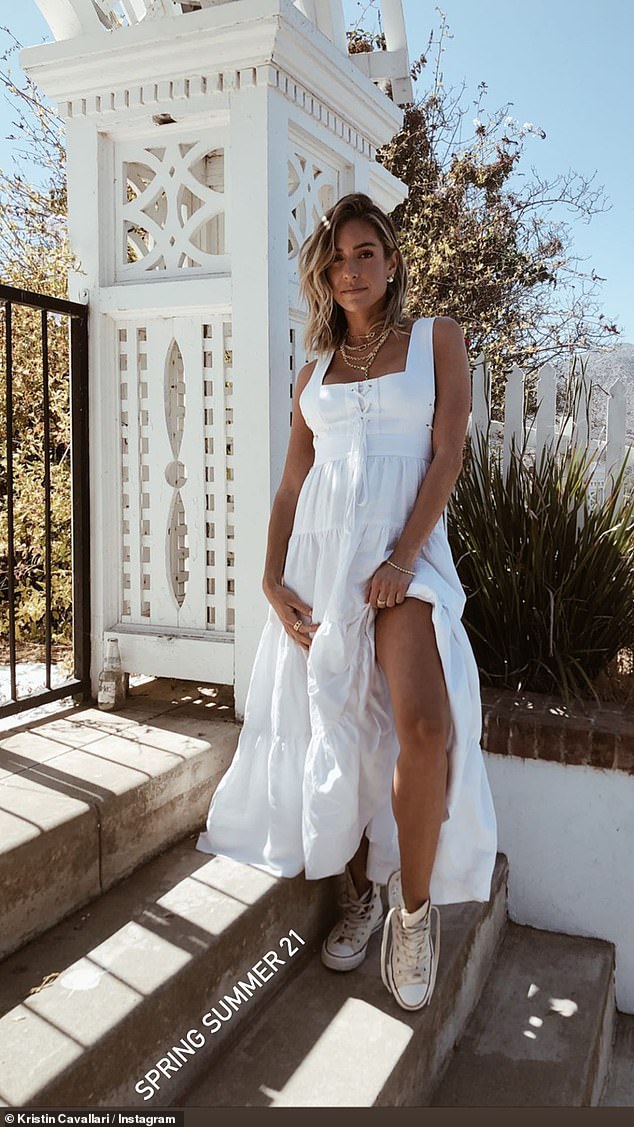 A new collection: Also this week the TV veteran posed in a white maxi dress with sneakers

‘It was not an easy decision, obviously,’ she told Entertainment Tonight in an interview that is set to air on Monday, September 28. ‘It was something that I truly thought about every single day for over two years.’

The star also told People on Wednesday: ‘It didn’t happen overnight. We tried really, really hard for years and years. It was the hardest decision I’ve ever made.’

Together the are co-parenting sons Camden, eight, and Jaxon, six, and daughter Saylor, four. 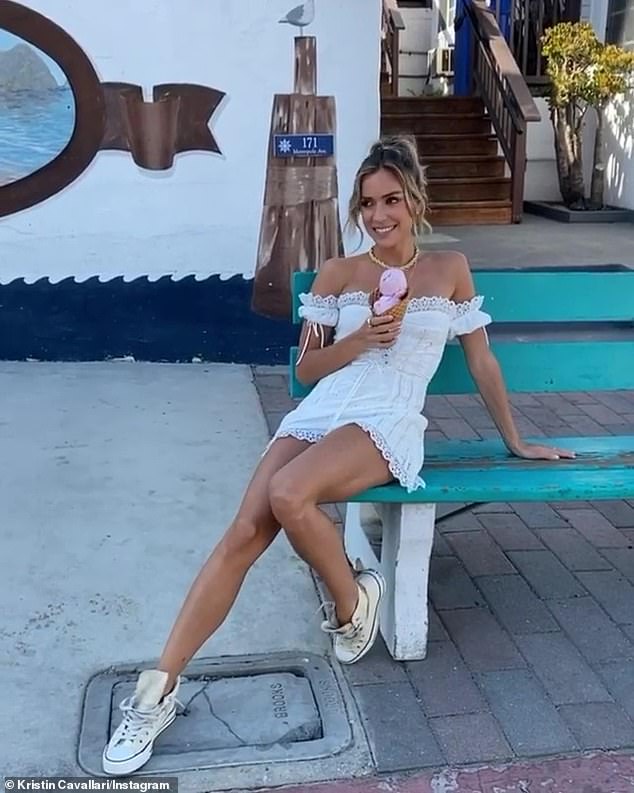 Her voice: Two scoops of pink ice cream were in a waffle cone as she sat on a bench

‘I still care so much about him and talk to him almost every day,’ she added. ‘We have three kids together. He’s going to be in my life forever.’

As for what caused them to part, Cavallari said there were issues they could not get over.

‘Every relationship has their stuff. I met Jay when I was 23. I was a baby. Jay and I had so much love for each other, but we grew up,’ she stated. ‘When you work at something for so many years and nothing’s changing, I think you have to just make a decision. We all want to be happy.’ 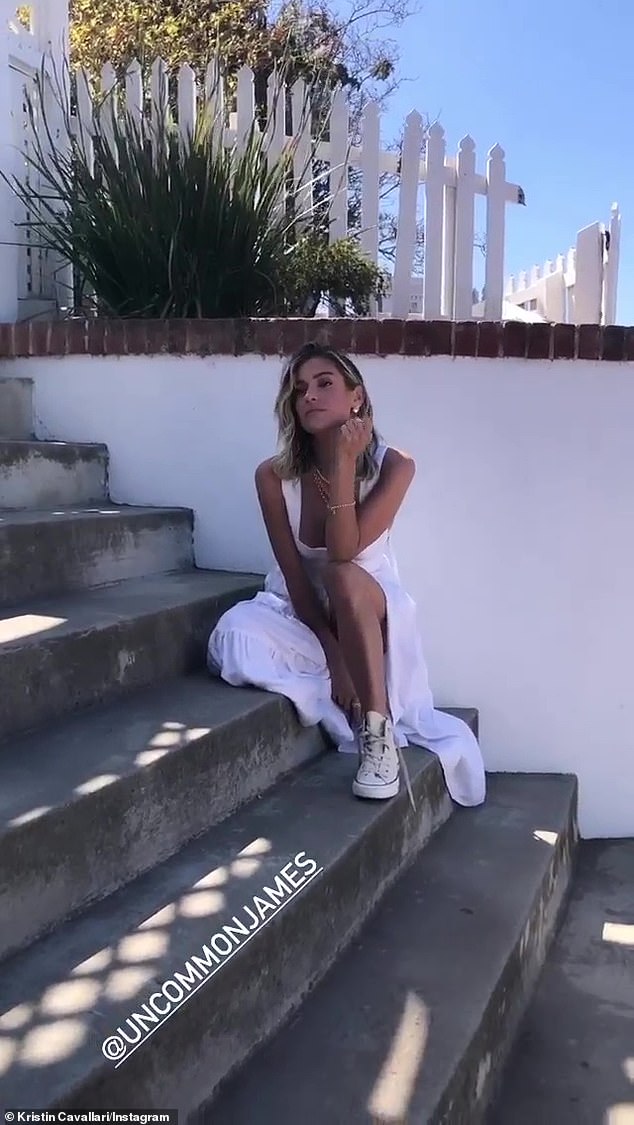 Sitting on the steps: She has quit her show Very Cavallari but still works on Uncommon James

The reality TV show Very Cavallari put a lot of attention on their marriage.

Now she has ended the show because she did not want it to cover her personal life.

‘I just knew I was going to have to talk about everything, and I didn’t want to. Thinking about filming was giving me anxiety,’ said the star.

‘My kids are the most important thing to me. What’s best for them?’ she shared. ‘Probably not doing a reality show, having to talk about divorcing their dad.’

And she noted the public’s perception of their marriage was off. 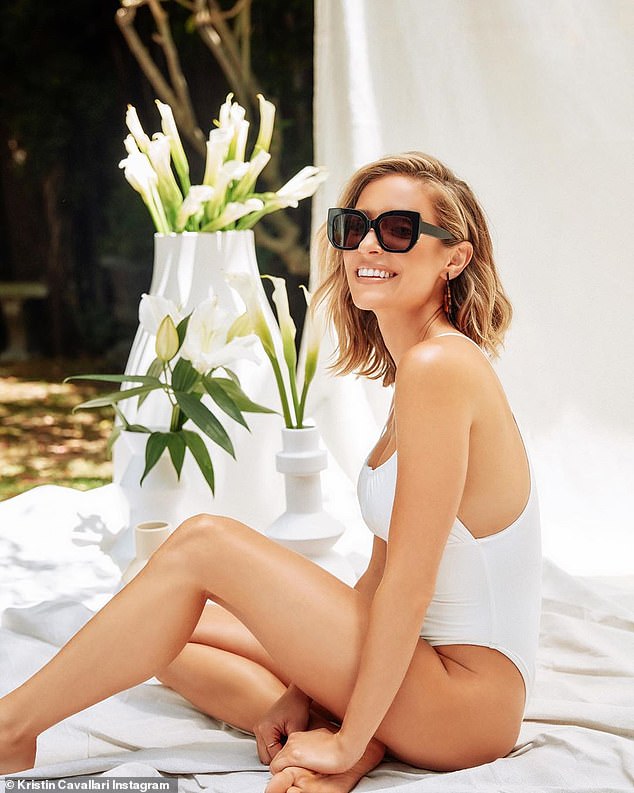 She has a thing for white swimsuits: In early August Kristin posted this pinup photo with the caption: ‘So excited for our jewelry + sunglasses collab!’

‘I always thought it was interesting when people would refer to us as “couple goals,”‘ said the author of the new cookbook, True Comfort (which comes out September 29).

‘I was like, “If you guys only knew,”‘ said the Uncommon James owner.

And they ‘definitely kept a lot of stuff private,’ during filming.

‘Producers saw stuff, but they didn’t put it in the show — which is good, because I don’t want my kids to ever [see that],’ she noted.

In August she told Us Weekly she is focusing on herself, kids and business Uncommon James and is learning ‘how to cut toxicity’ out of her life. 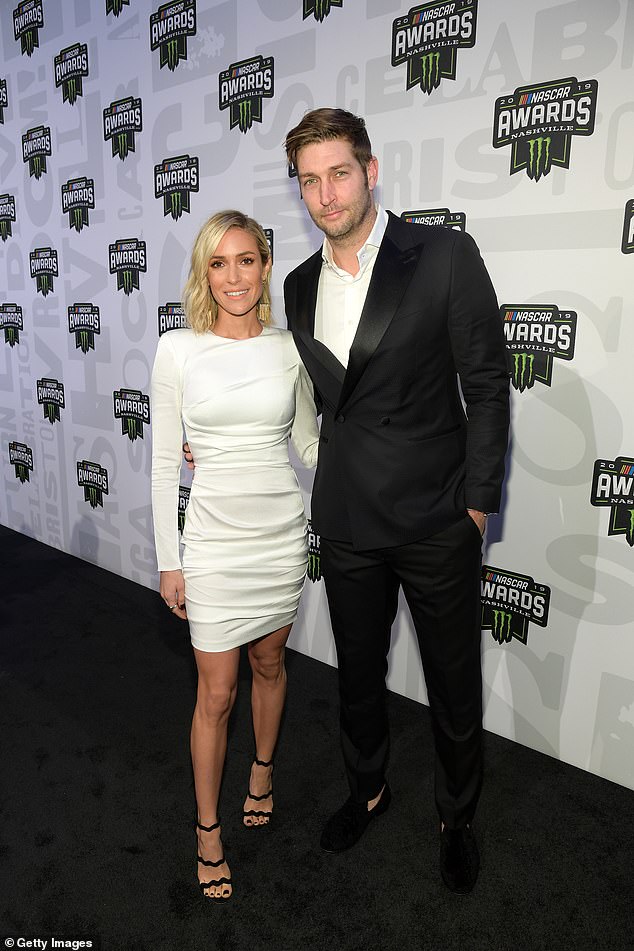 Split: Kristin announced her divorce from Jay Cutler, after seven-years of marriage, back in April (pictured in 2019). ‘It was not an easy decision, obviously,’ she told Entertainment Tonight in an interview that is set to air on Monday, September 28. ‘It was something that I truly thought about every single day for over two years’

‘This is the first time in a very long time that I fell like I can take a breath,’ she said. ‘I’m enjoying things slowed down and having more time to focus on what really matters in life.’

She spoke to the outlet about her collaboration with DIFF Eyewear and brand Uncommon James, which was released on Thursday.

Her brand, which started out in jewelry and has recently released apparel, has been a focus for the star.  ‘I want to take this extra time I have right now to better myself and be the best mom I can be,’ the former star of The Hill said. ‘And continue to grow Uncommon James.’

‘I wake up at 5 a.m. Monday through Friday to have that quiet time in the morning to get ready for the madness and to also work out,’ she said. 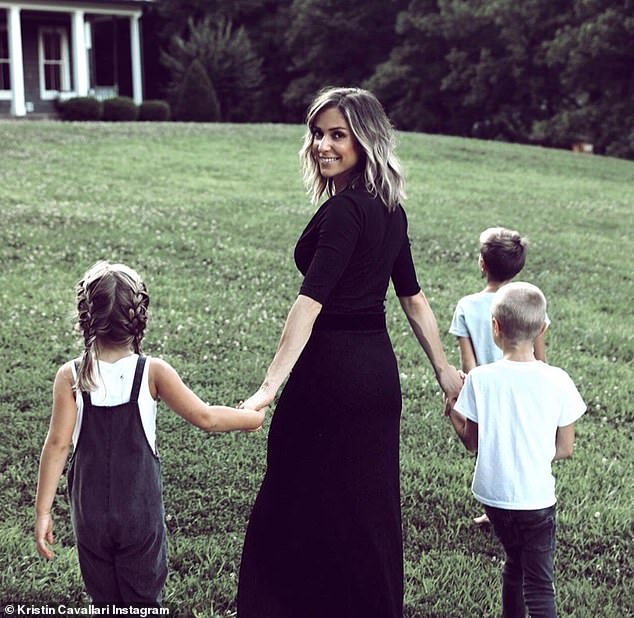 Cutting it out: The mother-of-three said she is focusing on herself, kids and business Uncommon James and is learning ‘how to cut toxicity’ out of her life

Adding that: ‘Working out keeps me sane. That’s the only real self-care I need besides a good bath and a face mask from time to time, which I’m able to do when my kids are in bed.’

Since announcing her split from the ex-NFLer, 37, the couple has had ups and downs, struggling to finally come to a custody agreement for their kids.

They dated for 10 months before he proposed to her in April 2011; they called off their engagement in July but reunited by December of that same year.

The former Hills star filed documents in June, accusing Jay of withholding money from her, according to TMZ.