Kylie Jenner Is Skipping the 2021 Met Gala—Here's Why

Welp, sounds like Kylie Jenner has officially skipped out on the 2021 Met Gala—a pretty big plot twist considering it was generally assumed she’d be attending the event.

Despite being in New York City for New York Fashion Week and showing up at multiple events, Kylie will not walk the Met Gala red carpet—even though some of her sisters are rumored to be in attendance. Kylie confirmed the news herself in an Insta Story while taking a walk through pictures of Met Galas past. 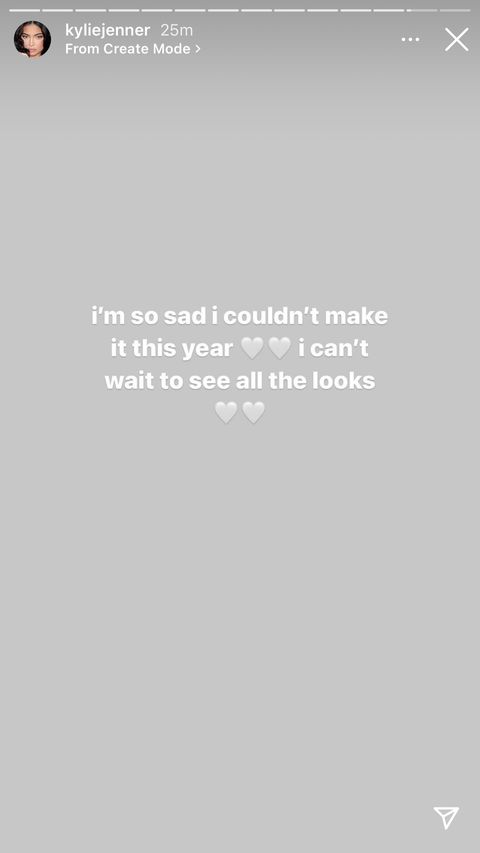 So…why is Kylie skipping the Met Gala? She hasn’t discussed her reasons publicly, but her absence was actually reported ahead of a time by a tipster who wrote into celeb gossip account @deuxmoi that Kylie “dropped out of the Met and is on her way home to LA.”

It seems like Kylie was definitely planning to attend the Met Gala, as a source told E! News that she originally planned to announce her pregnancy on the Met Gala red carpet but it “didn’t work out the way she had hoped.” Instead, news of Kylie’s pregnancy was leaked and she ended up confirming it with a cute video announcement.

“She wanted to keep it to herself and enjoy it for as long as she could,” a source told E!, adding that Kylie is “relieved and excited” that her baby news is out.

Despite a Met Gala pregnancy announcement not happening, the source says Kylie is “happy with the way it all turned out” and “she is very happy and thrilled to finally share such exciting news with all of her fans.”