Watson, 19, broke barriers with Chilling Adventures of Sabrina — both on screen as Theo, who came out as a trans boy in Part 2 of the series, and IRL as a young, non-binary actor in an industry that’s still playing catch-up on LGBTQ+ inclusivity. But as meaningful as playing a trans character has been for Watson, they want to expand their repertoire.

"I want to Tilda Swinton up my career," Watson says, "I want to break free of the boxes and the token-y roles … I would love to show that I can chameleon myself. That’s the fun part about being a queer actor; you really can do everything."

But being non-binary in Hollywood comes with its challenges. "I think we’re ushering in a lot of change and that’s really cool from the outside, but it can be really tough to see when you’re in the middle of it … To me, it feels like the change has been at a snail’s pace," Watson explains. "I feel like the cultural doors are wide open, but the industry doors — I’m halfway through picking the lock."

Watson recalls numerous auditions in which they almost got the part: "I have gotten a lot of feedback of like, ‘You’re two years too old,’ and then for something else I’m two years too young … It’s been interesting to hear the different ways of saying, ‘We don’t think the world is ready for you.’"

But Watson is far from giving up. "I have stumbled on some really, really cool projects that haven’t [had] those barriers, that don’t see me as just some weird, queer token — they really have been casting me for me," they say. "And that’s what I think the future of Hollywood is."

Until that future arrives, Watson is out to prove they can play all kinds of roles. Casting directors need not look further than Watson’s own Instagram for proof of their chameleon-like abilities. Below, they give the deets on three of the most striking #lewks on their grid.

This interview has been edited and condensed for clarity. 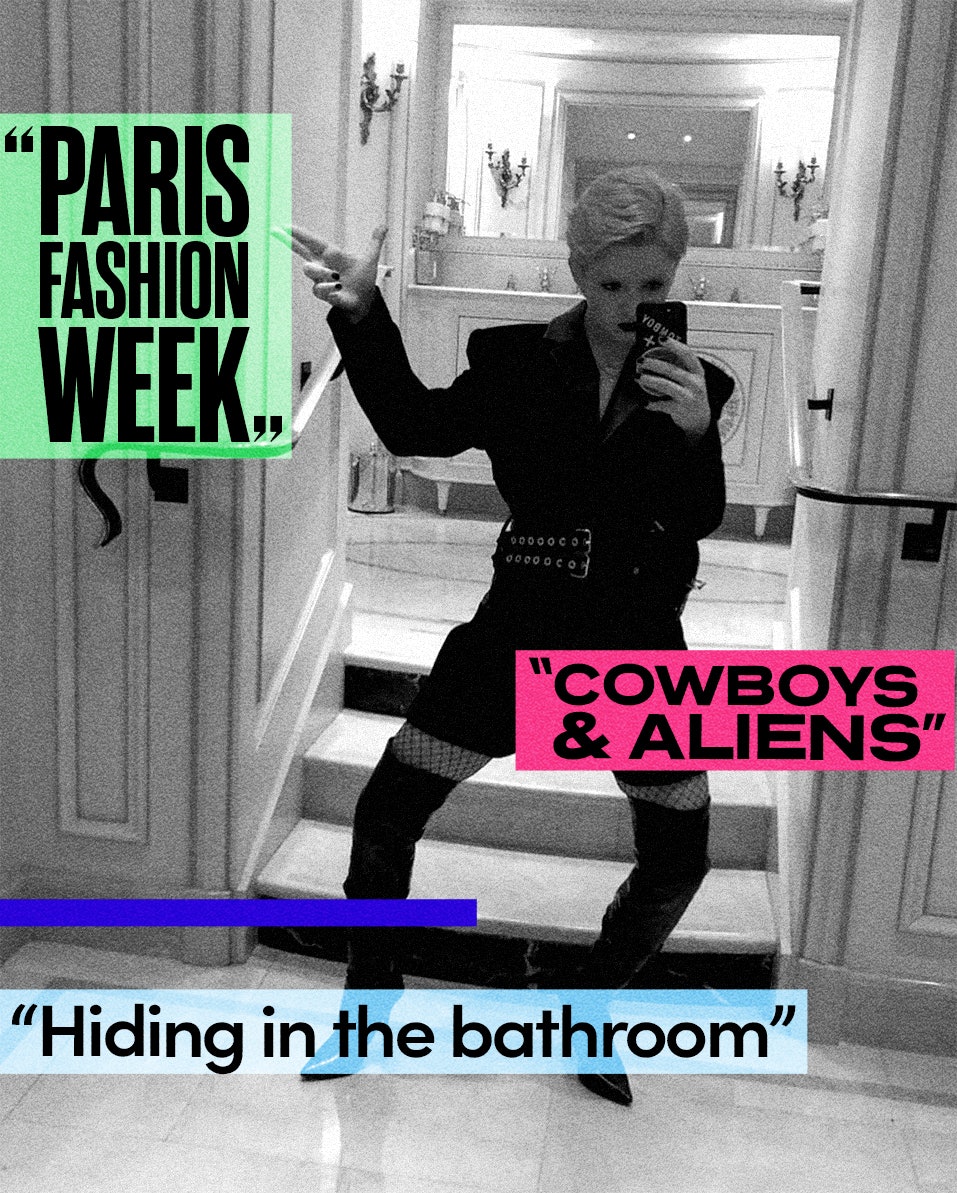 Elite Daily: When and where was this photo taken?

Lachlan Watson: This was March of this year — which feels like three years ago — two weeks before the pandemic hit and all the borders closed. This was in Paris for Paris Fashion Week.

ED: Your hair is so blonde here! What’s the story behind this look?

LW: Funny story — I was filming Sabrina a week before this picture; we finished filming on a Saturday. That Saturday shoot is [when I took] the picture of me in the blood with the black hair [below]. Then on Sunday, I spent six hours bleaching my hair from root to tip, and bleaching my eyebrows. Then I spent an hour packing and I left for Paris the literal next day at 5 a.m. So I finished shooting at 3 a.m. on a Saturday, bleached my hair all day Sunday with my one free day, and then flew to Paris the next day with the blonde hair.

ED: This pose is really… something. What vibe were you going for here?

LW: Do you remember the movie Cowboys & Aliens? Where there’s weird cowboys, and then sexy, sci-fi creepy aliens… Somehow, I was channeling that vibe for this photograph. I felt like a bounty hunter from space who had to fit in with cowboy times.

I got invited to this very fancy dinner where they served caviar, and I felt very out of place. So I hid in the bathroom like a good little anxious gay and took mirror selfies like Cowboys & Aliens.

The part you don’t see is that I had a roaring stomachache and ended up leaving 30 minutes after this photograph, putting on sweatpants, and crying while actually watching Cowboys & Aliens in my little Paris Airbnb.

ED: Considering this was your last trip before borders closed, where do you want to go once it’s safe to travel again?

LW: I have to go back to Paris. Paris Fashion Week is my favorite thing in the world. It’s something I never thought I would have access to. 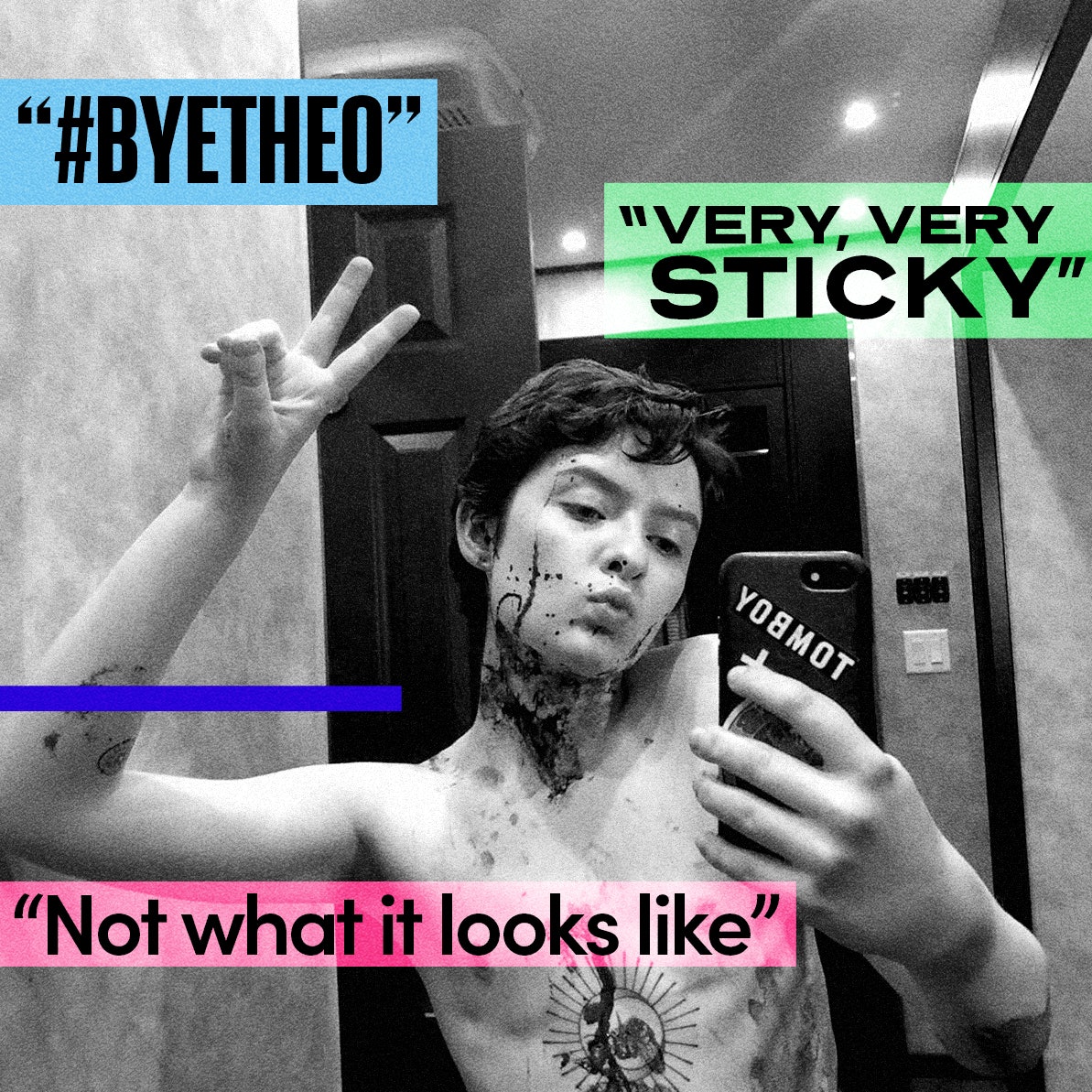 ED: Where and when was this photo taken?

LW: This one is quite spoiler heavy… This was my very, very last day on set. It is not what it looks like — [that’s] basically what I can say about this.

ED: Can you give any details about all the blood?

LW: I have literally never been covered in more blood. I was not naked when I [was] shooting. I was fully clothed. This is simply the blood that bled through the clothes onto my body. So, I was very, very sticky. At one point, they were trying to figure out how to get blood on me in the most efficient fashion, the makeup team [was] like, "All right, screw it. Just lay down on the ground and we’ll pour it on you." So I did and it felt horrible. [I was] coated in very sticky, mint-flavored blood.

ED: Did you say "mint-flavored"?

LW: All fake blood is mint-flavored, unless you get the strawberry kind. But don’t — it tastes like the bad toothpaste at the dentist.

ED: How’d you get all that blood off?

LW: This was the first and last time I ever had to take a shower in my trailer, which is a bizarre experience, because the showers in trailers are toilet-sized, and it was a lot of blood. But it was well worth it.

ED: When you posted this photo on Instagram, your caption was all about saying goodbye to Theo ahead of Sabrina‘s Part 4 release. What was special about your time on this show?

LW: Sabrina happened very much in formative years for me. I don’t really remember a lot of middle school and high school; I kind of blacked that out a little bit. But what I really remember is my time on Sabrina. That was really where I feel like I started coming into my own and really started living my life. 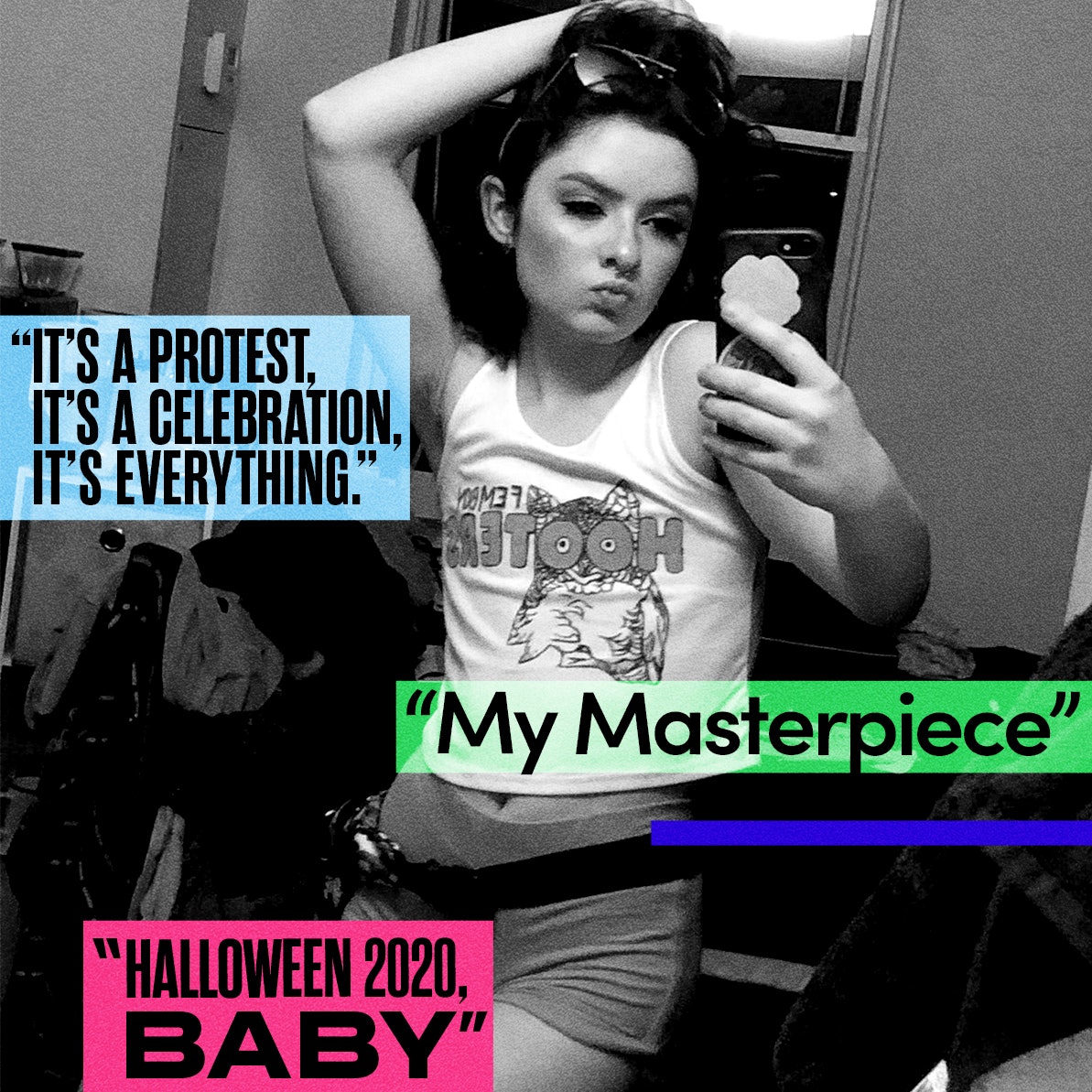 ED: Where and when was this photo taken?

LW: This was Halloween 2020, baby! This was in my friend’s college dorm room, so that is not my messy room.

ED: Talk to me about "Femboy Hooters."

LW: It’s a protest, it’s a celebration, it’s everything. It was a TikTok trend. I never felt it was the perfect moment [for me to do the trend] until this Halloween when I came home. Me and my very trans best friend in Raleigh, North Carolina, were like, "You know what? We’re going to do Femboy Hooters and everyone’s just going to have to deal with it."

ED: That’s amazing. How did you get the costume?

LW: We went to the local Goodwill and found white tank tops and matching orange shorts, and we went home and drew the logos ourselves. We showed up to that three-person dorm room Halloween looking like little trans royalty — with a tray of chicken tenders.

I’m going to frame [my tank] and put it up on my wall, because it’s honestly my masterpiece. I feel like the Museum of Modern Art is going to do a piece on Femboy Hooters, because it really is just such a perfect, abstract representation of the queer revolution of 2020.

ED: That’s beautiful. Also beautiful: your makeup in this pic. How’d you get so good at makeup?

LW: I, like many very emo high schoolers, spent six months in a deep depression where all I did was sit around and do makeup on myself. That was also when I was still identifying as a trans man, and was really leaning way too hard into the whole toxic masculinity thing, so it’s funny to me that makeup was still my outlet. It’s almost like it was my non-binary self still trying to claw its way out of the masculine shell and be like, "I’m still here."

So I just spent a lot of time doing it and it made me really happy. Before I got [cast in] Sabrina, I had stopped acting and was considering going to makeup school. I was going to do makeup professionally, so I’m glad to see those skills paying off.

ED: Love that. Also, can we talk about how all three of these photos we’re talking about are mirror selfies?

ED: Lots of actors stick to posting just professional photos on their Instagram. What about the art of the mirror selfie speaks to you?

LW: Well, I do try and post a lot of super cool, hot, professional pics too, because there are so many talented people who take such incredible photos. I try and support them as much as I can. I love that sh*t.

I think when I really started going crazy on Instagram, I had gotten turned down for some super [feminine], cisgender, female role. And I was like, "Why don’t they think I can do this?"

I realized because they were just watching Sabrina, where I was playing this masculine boy. So I was like, "Screw it. I’m going to post a bunch of mirror selfies in dresses on my Instagram, and just show them. I’ll just hand it to them on a silver platter." When in doubt, do it yourself.

In Elite Daily’s I Can Explain… series, we’re asking celebrities to revisit their most memorable photos and tell us what really went down behind the scenes. Read more here.