The expert on all things ‘rose and restaurants’ was spotted with her husband Ken Todd, 63, grabbing some provisions as they brought the haul back to their white Rolls Royce.

Wearing her signature color pink in face mask form, Lisa, 59, opted to do the heavy lifting as she carried three large bags to her husband. 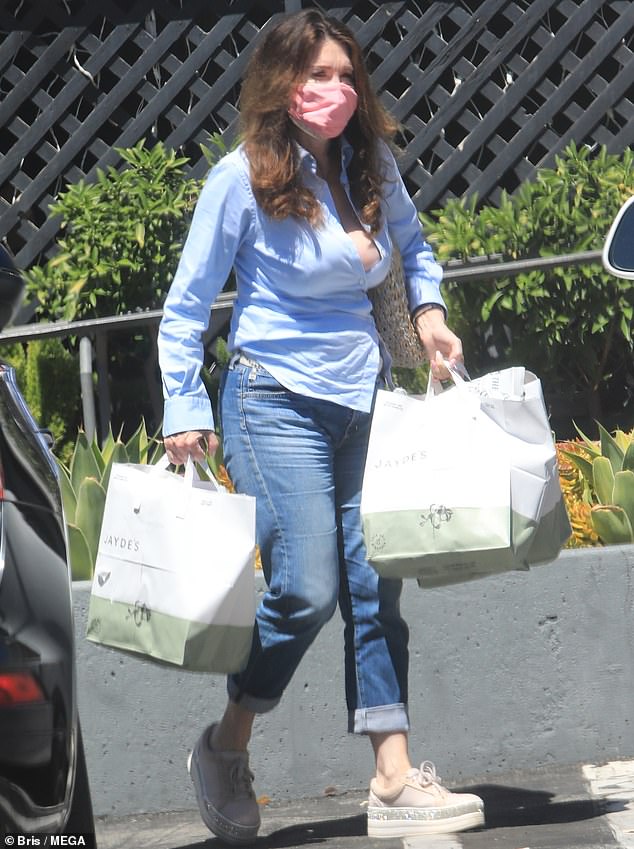 Popping out: Lisa Vanderpump, 59, looked stylish in a tight-fitting baby blue blouse while she sauntered to the car on Saturday

The Vanderpump Dogs owner looked stylish in a tight-fitting baby blue blouse while she sauntered to the car.

She wore her brown locks blown out as usual, as she made her way out of the store and kept her jewelry to a minimum.

Ken opted for a sportier look as the restaurateur wore a black polo with a white emblem and a pair of navy ‘Italia’ athletic shorts. He topped the look off with a pair of navy Skechers and a surgical face mask as he stood by the car. 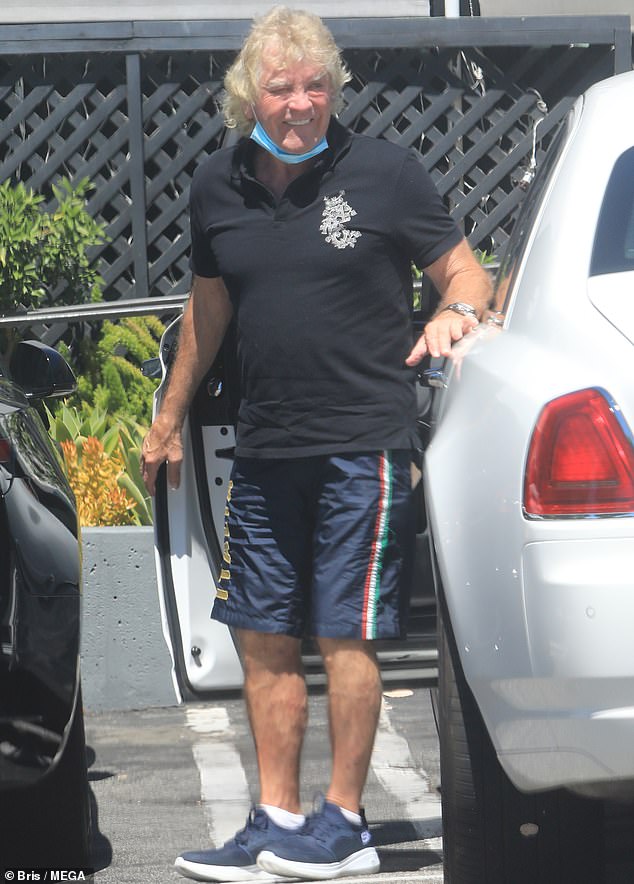 Standing by: Ken seemed to let his wife of 38 years do the heavy lifting as she struggled with the bags while he stood by 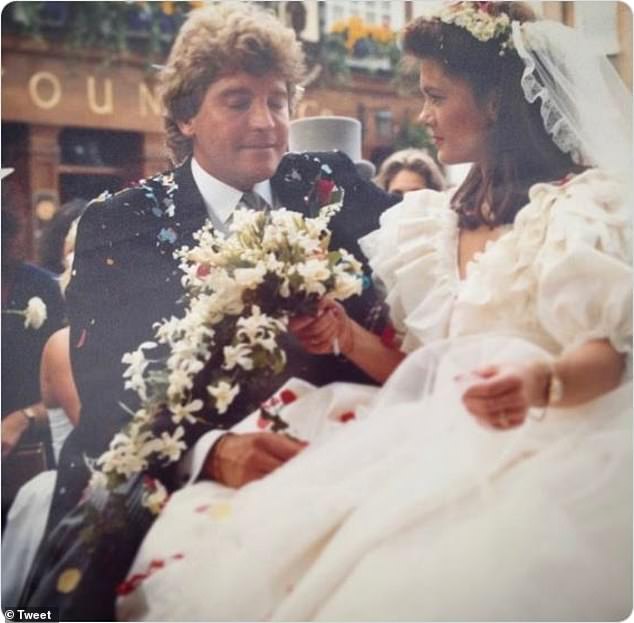 Wedded bliss: Ken and Lisa celebrated 38 years of marriage this past Friday. Lisa was quick to re-tweet a bunch of sweet Twitter photos of their wedding day 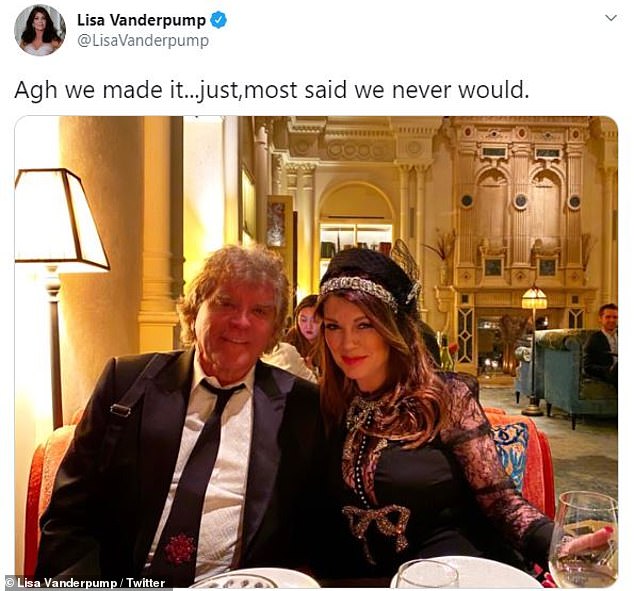 Still going strong: ‘Agh we made it…just, most said we never would’ Lisa tweeted to her 1.8M followers on August 28

The couple who just celebrated 38 years of marriage on August 28, seemed to be at ease as they got their goods before heading back to their palatial Villa Rosa in Beverly Hills.

Over the weekend, Lisa tweeted a sweet tribute photo of the pair on their anniversary with the caption ‘Agh we made it…just, most said we never would.’

She has been famously cheeky about their sex life on their reality shows, often joking on  that they are only intimate on special occasions.

In a Vanderpump Rules after show last year for season 7, LVP even got candid about her ‘ho days’ before meeting Ken, as she revealed, ‘Ho days? Well, of course [I had them], before I was married…but I didn’t meet somebody, sleep with them, get drunk and never see them again.’ 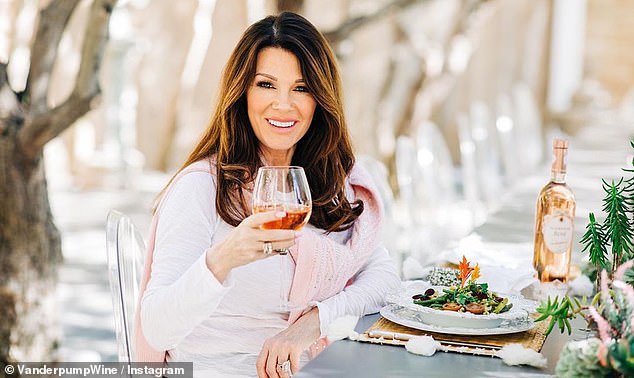 Rose queen: In addition to all of her restaurants in Los Angeles, London and Vegas, Lisa and Ken also own a brand of wines and sangria that bears their last name

Ken and Lisa have two children – one biological daughter Pandora, 34, who is in charge of all things Vanderpump Wines alongside her parents, and adopted son Max, 28, who works as a busser in their restaurant SUR which serves as the main backdrop for the show Vanderpump Rules.

This summer it was announced the reality queen would be securing another spinoff, this time a show about her posh dog rescue store, Vanderpump Dogs.

The show will be coming to NBC’s new streaming service Peacock at some point in the future. 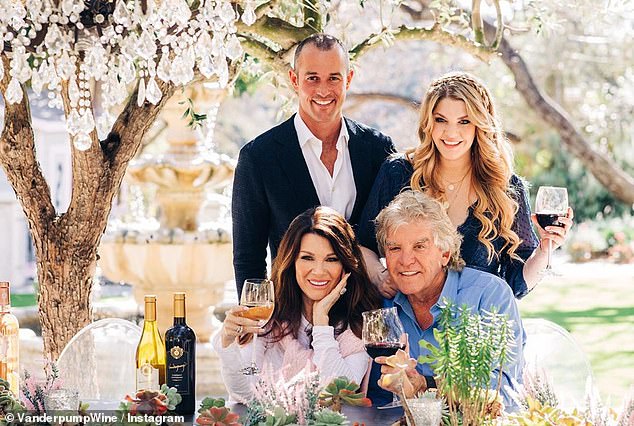 No need to wine: Lisa and Ken together have had over 36 restaurants, clubs and bars in LA and London; pictured with their daughter and son-in-law for a promotional Vanderpump Wines shoot April 2020