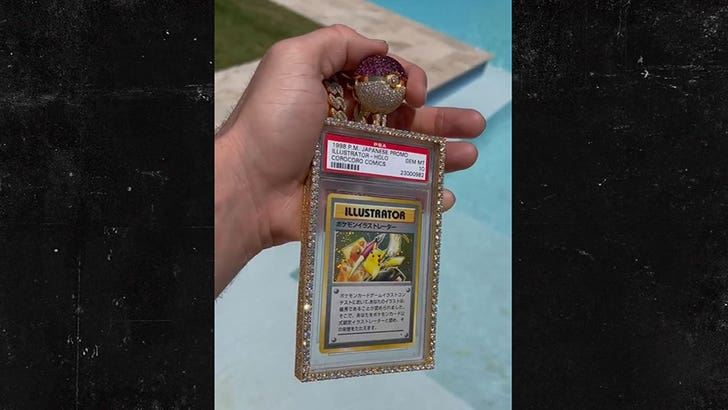 If you thought dropping $5.2 million on a piece of cardboard was a lot, Logan Paul says he paid even more to keep his beloved, rare Pokémon card safe — shelling out $80k for its iced-out pendant case!!

Paul — who bought the PSA 10 Pikachu Illustrator for $5,275,000 and then wore it around his neck at WrestleMania — is opening up about his Guinness World Record-breaking purchase on Monday … saying it was a transaction more than a year in the making.

The Maverick says he completely understands spending that kinda coin on a piece of cardboard is “absurd” … but offers his reasoning behind pulling the trigger.

“The Pikachu Illustrator is the rarest Pokémon card in the world,” Paul says. “Only 39 of them exist, and this is the ONLY PSA 10 (perfect condition). Until this weekend, there were no pictures or videos of this card ANYWHERE.”

Logan says he was able to track down the owner of the card last year, spent months negotiating … and then finally made his way to Dubai to make the purchase.

Logan later turned the card into an $80k wearable piece … which he debuted alongside the Miz at Mania on Saturday.

The case is completely decked out in diamonds and gold … including a shiny Pokeball bail.

Paul was incredibly impressive during the event … but as he puts it, the card was “the real star of WrestleMania.”