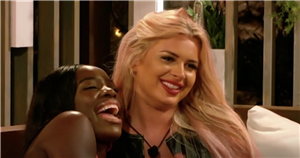 Maura Higgins is known for being the Love Islander who says it how it is, and after last night's Love Island episode, fans are calling for her to make a much-needed return.

Liberty Poole, 21, and Kaz Kamwi, 29, were seen pining over their partners Jake Cornish, 24, and Toby Aromolaran, 22, last night, and Love Island viewers are now calling for Maura, 30, to give the girls some one-on-one advice after she gave Amy Hart some tough love back in 2019.

Viewers have grown to question Jake's intentions with Liberty after admitting to the boys he didn't look at her and "want to rip her clothes off" and said his head could be turned in the future.

Despite saying this, the star from Somerset and the blonde beauty were chosen as the couple to go into the hideaway which saw them enjoy some alone time together.

Fans are also concerned for Kaz after she was asking Toby for a cuddle just days after the footballer admitted he "wasn't sure" about her.

The star from Essex told some of his fellow islanders he didn't want to give Kaz the wrong signals as that wouldn't be fair, but the pair finally shared a kiss on the balcony.

Back in 2019, Maura sat down with Amy Hart and Lucie Donlan when the former air hostess admitted she was going to tell Curtis Pritchard she loved him when the girls returned from Casa Amor.

Fans continued to share the clip from two years ago as one wrote: "We need someone to pull Liberty and Kaz aside and have the same energy as Maura #LoveIsland."

Another added: "Petition to send Maura back into the villa #LoveIsland."

“Let Maura into the villa quick these girls need a reality check," a third fan wrote.

A fourth follower shared: "Nah we need a Maura. This has gone on long enough. #LoveIsland."

The video shows Amy talking about Curtis as she said: "I love him," to which Lucie asks: "But, does he love you?"

"Why are you asking her that?" Maura jumps in, before shutting Lucie down with: "He doesn't."

Amy Hart and Curtis Pritchard were coupled up on Love Island in 2019, but after the dancer didn't feel their connection after Casa Amor, Amy decided to leave the show.

Once Amy departed the series, viewers saw Maura couple up with Curtis and continue their relationship outside of the villa until March 2020.

Maura went on to date fellow Love Island alumni Chris Taylor until they split in May this year.