Madonna cancels ANOTHER date on her Madame X tour

Madonna has cancelled another date on her Madame X tour, just 45 minutes before she was due to appear on stage at the Coliseu Theatre in Lisbon, Portugal.

The musician, 61, announced the news via her Instagram page on Sunday, taking the total number of abandoned dates to eight out of the 93 planned appearances.

Informing fans the evening’s show had been cancelled, she wrote: ‘Thank you again Lisbon! Sorry I had to cancel tonight but I must listen to my body and rest!!’ 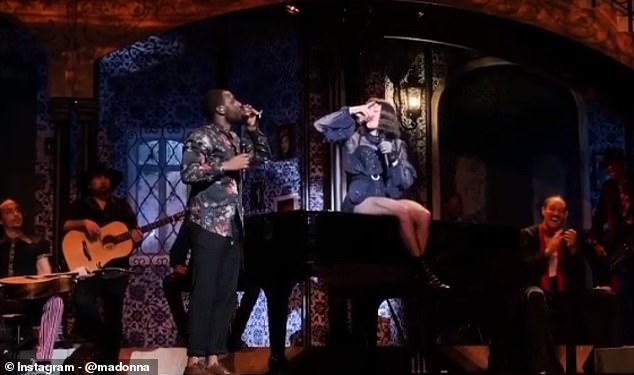 Disappointment: Madonna has cancelled another date on her Madame X tour, just 45 minutes before she was due to appear on stage at the Coliseu Theatre in Lisbon, Portugal

She jokingly added: ‘That white Port got me through the rest of the show! See you on Tuesday fingers crossed @dinodsantiago #madamextheatre #lisboa #coliseu’

An email sent at 19:45 on Sunday night informed the January 19 ticket holders that Madonna would not be appearing on stage at 20:30 as planned.

Madonna cited injury as the reason for needing to cancel the date at such short notice sharing a video of herself ‘warming-up’ for a show four days before.

While she has not released details of her injury, the star reportedly told a San Francisco audience in November that she was suffering from a ‘bad knee’ due to a torn ligament.

Breaking the news: The musician, 61, announced the news via her Instagram page on Sunday, telling fans she had to drink port on stage the night before to ‘get through it’ 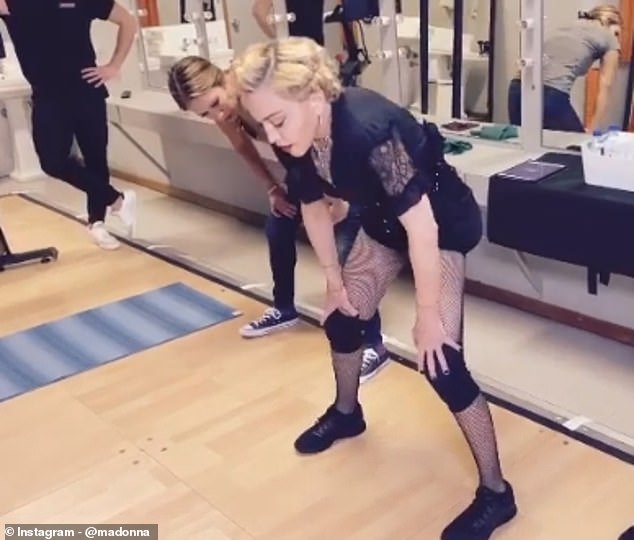 Carefully does it: Madonna shared a video of herself tentatively warming up with a trainer to Instagram, captioning the video ‘How an injured Madame X warms up for a show’

That number has since fallen to 86 after the star cancelled eight show dates; two in New York, one in Los Angeles, three in Boston, one in Miami Beach and now a date in Lisbon.

Madonna is four shows into her European tour, with 32 more shows to go.

During Saturday night’s show in Lisbon the singer downed white port on stage with musician Dino D’Santiago, stating that the drink, which was her ‘first in a month’ had ‘got her through’ the rest of the performance. 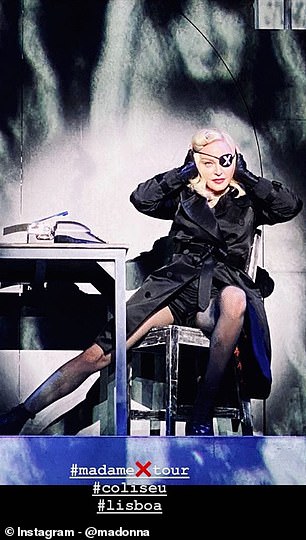 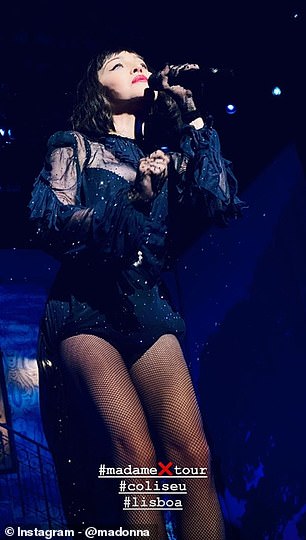 Madame X: Madonna took to Instagram to share a selection of photos from the four shows she performed in Lisbon’s Coliseu Theatre

Furious fans on Instagram, who had tickets to Sunday night’s cancelled show, called for her to ditch the tour entirely to avoid last minute disappointment and wasted travel plans.

One fan commented on the star’s Instagram announcement:  ‘You should cancel the tour’.

While another angry fan wrote: ‘This is unfair on your fans sorry ! A hour before doors open ! This will happen in London too ? Hope not ! Unfair madonna and i’m a massive fan of yours ! Cancel in advance please.’

Another wrote: ‘Cancel the rest of the tour and come back once you are ok. I paid flights and hotel. Never again. Ciao.’

Other superfans were more understanding of the singer’s health issues writing: ‘Your health comes first.’

Another wrote: ‘So sad I ‘m here for the show but your health goes first. Hope to see you on Wednesday, back in Lisbon again.’

Cancel the tour: Furious fans called for her to ditch the tour entirely to avoid last minute disappointment and wasted travel plans while others had a more sympathetic view