Megyn Kelly had no sympathy to offer Meghan Markle after her explosive sit-down with Oprah, mocking her ‘unrelatable’ problems.

Megyn Kelly is among the voices criticizing Meghan Markle after her revealing March 7 interview with Oprah Winfrey, in which she discussed suicidal ideation and racism she experienced as part of the royal family. The former Fox News host, 50, told Good Morning Britain that she thinks the Duchess of Sussex is “totally un-self-aware” after making complaints “unrelatable to 99% of people” and inviting celebrities to her 2018 wedding.

“What I saw tonight is someone who was totally un-self-aware, completely unaware of how she sounded,” Megyn said, going on to mock Meghan. “‘I wasn’t planning on saying anything shocking, except that my husband’s racist family drove me to suicidal thoughts while I was pregnant with my baby. And by the way, I had no idea what the internet said about Harry.’ Nobody believes that.

“‘And I thought meeting the Queen was going to be like meeting a celebrity in Los Angeles, like meeting Kris Jenner!’ Nobody believes that.” Megyn cited a New York Post opinion piece that slammed Meghan for inviting celebrities like Oprah and George Clooney to her and Prince Harry‘s wedding, as well as wearing diamond earrings gifted to her by Crown Prince Mohammed bin Salman of Saudi Arabia. “So spare us that you’re not into any of the grandeur,” Megyn seethed. 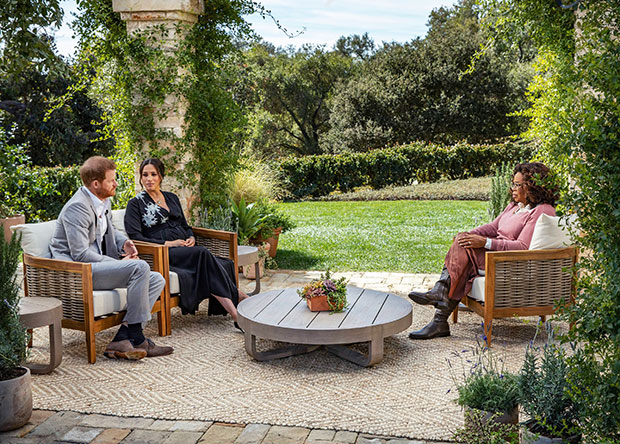 Meghan and Prince Harry‘s explosive sit-down with Oprah shocked audiences after they revealed the horrifying ways Meghan was treated in the British press, and, allegedly, within “The Firm” itself. They claimed that the decision to not give their son, Archie, a royal title wasn’t their own, and that the news was broken to them amid “concerns and conversations about how dark his skin might when he’s born.” Meghan also revealed that she contemplated suicide during her pregnancy, and the royal family allegedly wouldn’t let her seek help because of the optics.

Megyn, whose NBC morning show was canceled shortly after she posited that it was okay to do blackface on Halloween, also went off on Twitter. “Meghan says ‘FAMILY had a conversation with Harry’ worrying about how dark Archie’s skin would be. Won’t name the person bc would be ‘very damaging’ to them… Harry refuses to say who in his family was concerned about the color H&M’s kids’ skin would be. So they’ve basically thrown the entire Royal family under the bus.”