Naga Munchetty mocked over being 'fired from Samaritans'

Naga Munchetty won big at the Eastern Eye’s Arts and Culture Awards (ACTA) which recognises British Asian Talent in a wide range of disciplines including literature, film, television and theatre. The BBC Breakfast presenter issued an apology to her mum after the small-screen star scooped the prestigious award.

The 45-year-old shared her delight after winning the prize in the Best Presenter category.

BBC Radio 5 Live presenter and ceremony host, Nihal Arthanayake began: “Every time I judge these awards, I can’t believe how talented the people are that we are judging.

“It makes it very, very difficult.”

After reading out the nominees for the Best Presenter award, Nihal took a cheeky swipe at his colleague who won for her presenting work on Breakfast. 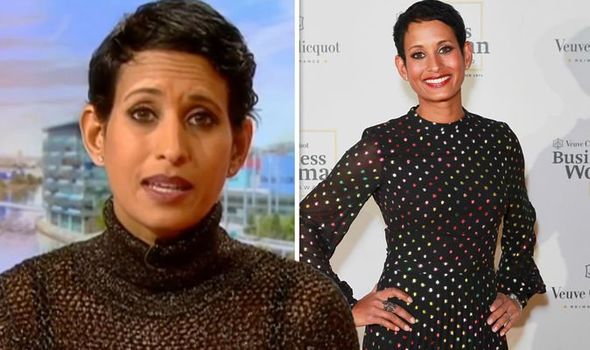 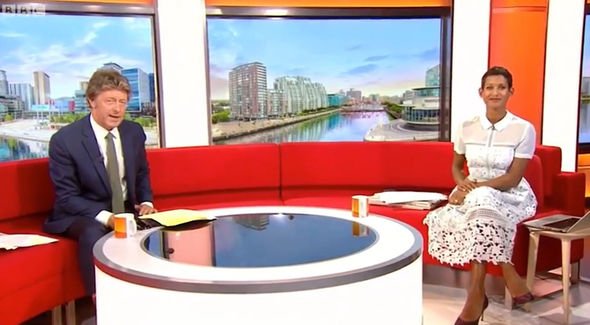 “Thank you to the judging panel for this accolade. And congratulations to all the other nominees.”

The broadcaster then issued an apology to her mum after being asked if she would say “sorry” to anyone during her broadcasting career. 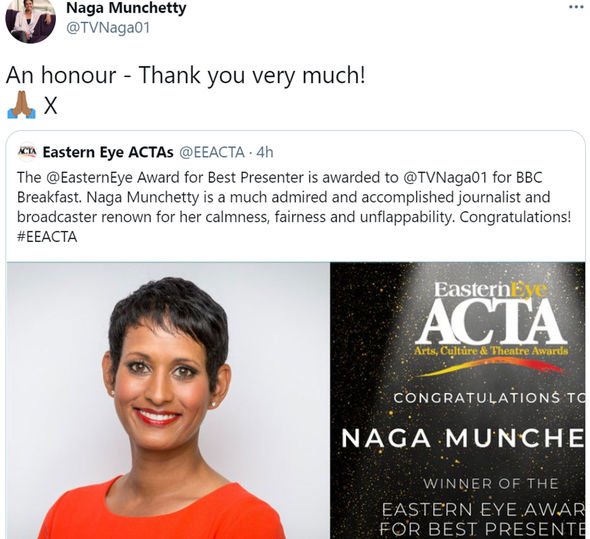 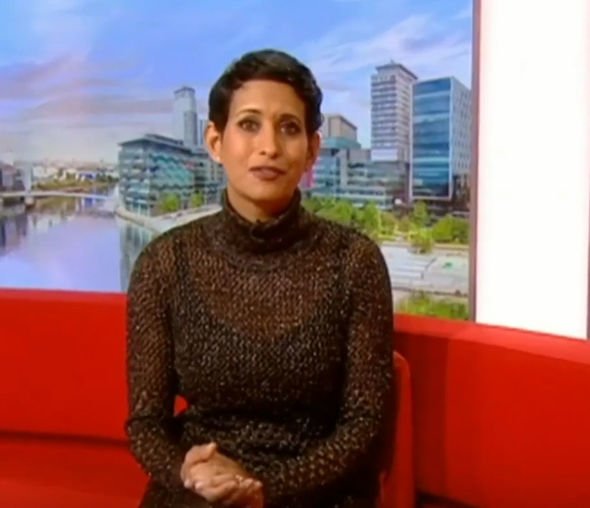 “Is there anyone I would like to say sorry to? Probably my mum,” Naga cheekily admitted.

“For putting up with me,” before adding: “My favourite other Asian is my mum because she’s put up with me and she’s my biggest cheerleader.”

Naga took to Twitter and shared the news of her big win, in view of her 240,000 followers.

She retweeted a post from the official Eastern Eye ACTA awards official account, which read: “The @EasternEye Award for Best Presenter is awarded to @TVNaga01 for BBC Breakfast. Naga Munchetty is a much admired and accomplished journalist and broadcaster renowned for her calmness, fairness and unflappability. Congratulations! #EEACTA.”

Naga captioned the post: “An honour – Thank you very much!”

Viewers and colleagues alike took to the micro-blogging site and offered their well-wishes to the broadcaster who is known for holding high profiled figures and politicians to account on Breakfast.

Nihal penned: “I hosted the awards but had no say. So no fix going on.”

A social media user remarked: “Congratulations Naga! Much deserved. It’s been really great listening to you on the radio during lockdown. You are kind and compassionate during your conversations as well as standing firm and holding to account when necessary.”

“I love watching you but you scare me to bits when you are on form. I just hope that when I am in trouble you are standing next to me and not opposite. A tremendous role model for men and women,” another person commented.

A third wrote: “Well done Naga! You should be awarded for your sense of humour too! I’ll never forget the one with Charlie and the snowman in a bikini.” 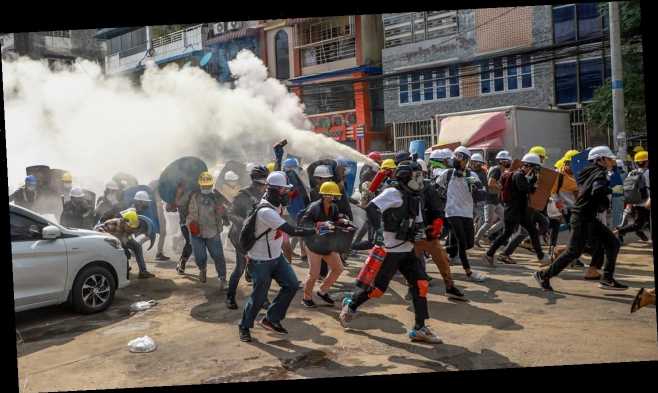 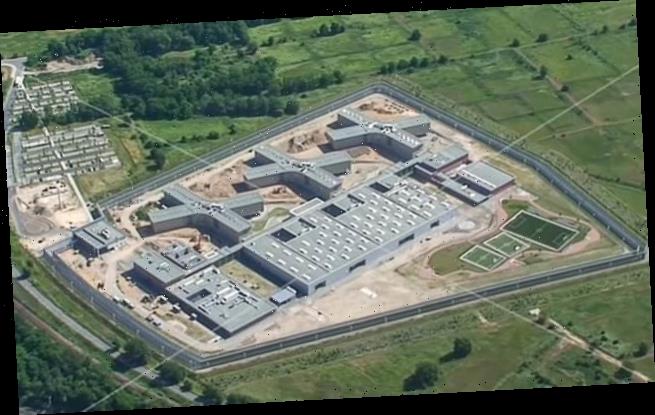 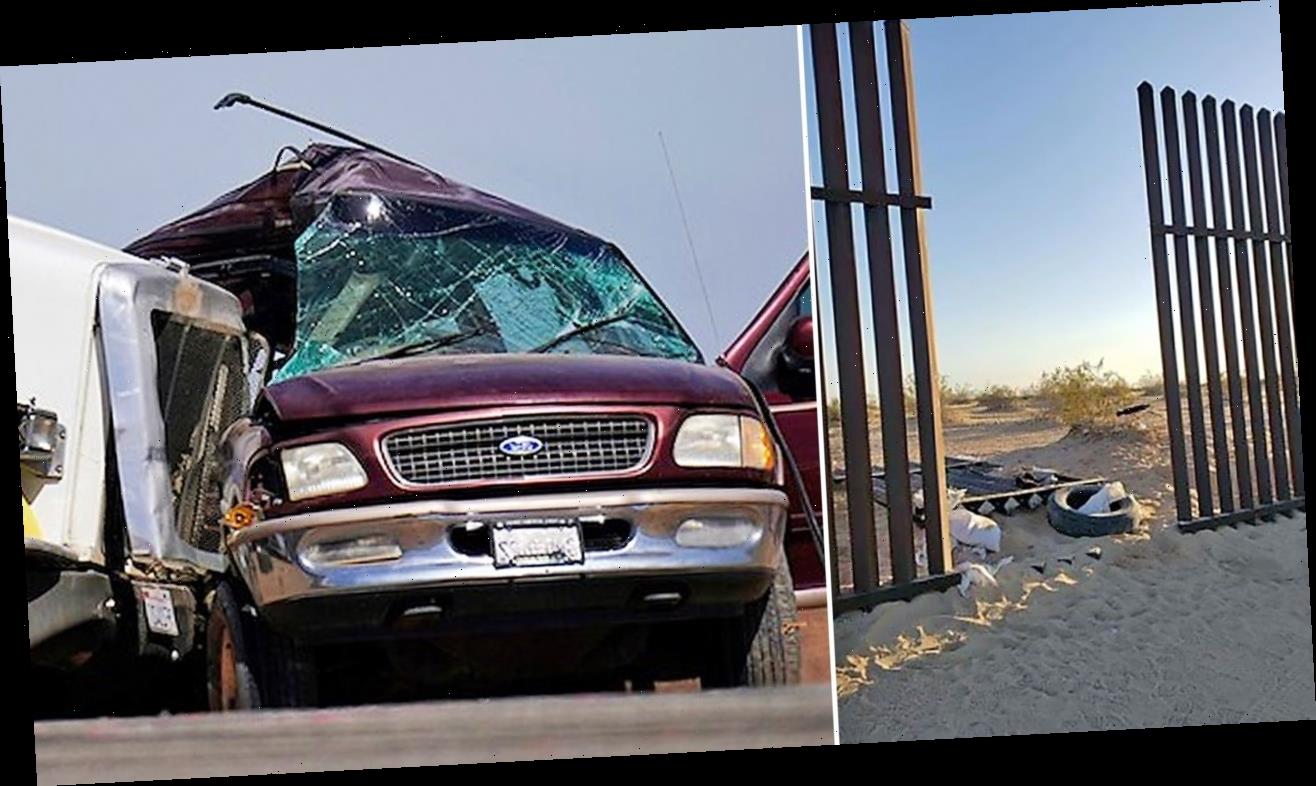