Princes Harry and William reunited for the first time publicly on Saturday amid their royal rift as they made their way to St. George’s Chapel at Windsor Castle to attend their grandfather, Prince Philip’s, funeral.

The Duke of Sussex, 36, and Duke of Cambridge, 38, were spotted in the third line of the royal family member procession that took place just after 9:40 a.m. The brothers, whose rift has been heavily reported since Harry and his wife, Meghan Markle, stepped away from royal duties last March, were separated in the third line by their cousin, Peter Phillips.

The brothers showed little emotion as they followed the Duke of Edinburgh’s coffin to St. George’s Chapel. Each had stern faces, as they followed behind their uncle, Prince Andrew, in the second line. The family procession was led by Prince Charles and Princess Anne. 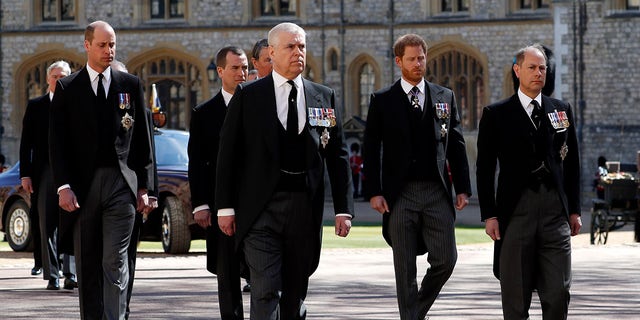 The Duke of Sussex and Duke of Cambridge were separated by their cousin, Peter Phillips, in the third line of the family procession to St. George’s Chapel.
(Getty Images)

The ceremony also marks the first time Harry will reunite with his family since the Duke and Duchess of Sussex’s tell-all interview to Oprah Winfrey that was viewed by nearly 50 million people globally.

Harry traveled solo as his wife Meghan stayed back in California with their almost 2-year-old son Archie. The Duchess of Sussex is expecting her second child, a girl due this summer. The 39-year-old was advised by a physician not to travel.

During their televised sit-down with Winfrey, the couple suggested that an unnamed member of the royal family made a racist comment to Harry, 36, before the birth of their child Archie in 2019. Harry later clarified that his grandparents did not make the comment in question. Harry previously told Winfrey, 67, that his relationships with Charles, 72, and William have ruptured. 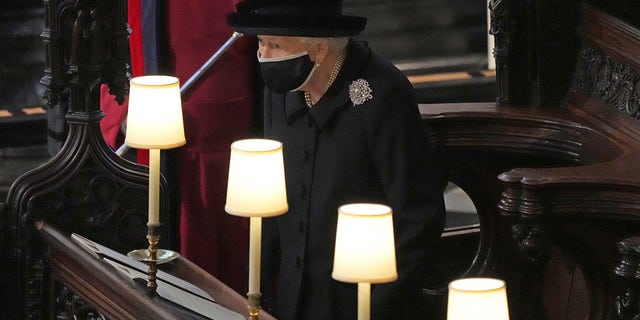 As young boys, both walked behind their mother Princess Diana’s coffin in 1997 in London in a ceremony watched around the world.

Earlier this week, a palace spokesman said while speaking on condition of anonymity, “This is a funeral and the arrangements have been agreed and they represent Her Majesty’s wishes.”

The ceremonial royal funeral is expected to be a low-key send-off to Philip, the longest-serving royal consort in British history. The ceremony, code-named Operation Forth Bridge, was limited to 30 attendees, but the service is one that the Duke of Edinburgh had much participation in planning prior to his passing.

All funeral attendees were required to wear face coverings while inside St. George’s Chapel while those who are participating in the funeral procession will not be donning masks until they’ve entered the chapel.