Rachael Kirkconnell Admits to Racist Actions, Says “I Was Wrong” 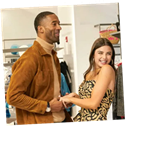 According to a variety of The Bachelor spoilers, Rachael Kirkconnell has won over Matt James.

The 24-year old will reportedly earn a proposal from the ABC lead at the conclusion of Season 25.

First, however, Kirkconnell would like to earn a second chance from viewers of this beloved franchise.

In her first public statement since facing criticism for controversial photos and past social media behavior, The Bachelor suitor said on Thursday that she “didn’t recognize how offensive and racist” her actions were at the time.

Explained Kirkconnell to open her confession:

“While there have been rumors circulating, there have also been truths that have come to light that I need to address. I hear you, and I’m here to say I was wrong.”

For those just catching up:

Kirkconnell is competing on the latest season of the aforementioned series and most The Bachelor spoilers have claimed she will be handed the final rose.

However, Rachael was recently accused of attending an antebellum plantation themed fraternity formal in 2018.

She’s also been spotted in a Native American costume… has Liked a number of photos that included MAGA hats and the Confederate Flag… and a TikTok user has said Kirkconnell treated Black students very poorly in high school.

“At one point, I didn’t recognize how offensive and racist my actions were, but that doesn’t excuse them,” continued the contestant last night.

“My age or when it happened does not excuse anything.

“They are not acceptable or okay in any sense.

“I was ignorant, but my ignorance was racist.”

Pretty blunt statement there, huh? Gotta at least appreciate that aspect of the message.

“I am sorry to the communities and individuals that my actions harmed and offended,” wrote Kirkconnell.

“I am ashamed about my lack of education, but it is no one’s responsibility to educate me.

“I am learning and will continue to learn how to be antiracist, because it’s important to speak up in the moment and not after you’re called out.

“If you are a person who doesn’t understand the offense in question, I urge you to learn from my mistakes and encourage you to use them as a teachable moment.”

The Bachelor host Chris Harrison had to issue an apology of his own this week after sticking up for Rachael in an interview.

She’s clearly aware of all the negative attention she’s been receiving of late; both directed at herself and the program in general.

“As for my family, I love them and how they raised me to be my own individual. They have always encouraged me to have my own views, opinions, and beliefs,” Kirkconnell added on Thursday.

She then admitted that she knows how these sort of statement may sound to many observers:

As I was thinking about what I wanted to say, I couldn’t help but think about how sick people must be of reading these kinds of statements;

How a person didn’t realize the trauma that their actions would inflict on other people.

It must get so exhausting.

I want to put my energy towards preventing people from making the same offensive mistakes that I made in the first place, and I hope I can prove this to you moving forward.

Racial progress and unity are impossible without (white) accountability, and I deserve to be held accountable for my actions.

I will never grow unless I recognize what I have done is wrong.

James, who made history as the first Black Bachelor, previously encouraged Bachelor Nation to “be really careful” about what they are posting on social media when asked about Kirkconnell.

This is what he told Entertainment Tonight earlier this month:

“Rumors are dark and nasty and can ruin people’s lives.

“So, I would give people the benefit of the doubt, and hopefully she will have her time to speak on that.”

As for Harrison, he stirred up his own drama when remarking as follows to Rachel Lindsay on February 9:

“I haven’t talked to Rachael about it, we all need to have a little grace, a little understanding, a little compassion.

“I have seen some stuff online.

“Again, this judge, jury, executioner thing where people are just tearing this girl’s life apart … Until I actually hear this woman have a chance to speak, who am I to say any of this…

“I saw a picture of her at a sorority party five years ago that’s it… My guess? These girls got dressed up and went to a party and had a great time, they were 18 years old.

After earning backlash for this defense, Harrison said the following a day later on Instagram:

“What I now realize I have done is cause harm by wrongly speaking in a manner that perpetuates racism, and for that I am so deeply sorry.

“I also apologize to my friend Rachel Lindsay for not listening to her better on a topic she has first hand understanding of, and humbly thank the members of Bachelor Nation who have reached out to me to hold me accountable.

“I promise to do better.”

The Bachelor Spoilers: We Know the Winner … and a Proposal Shocker!Start Gallery