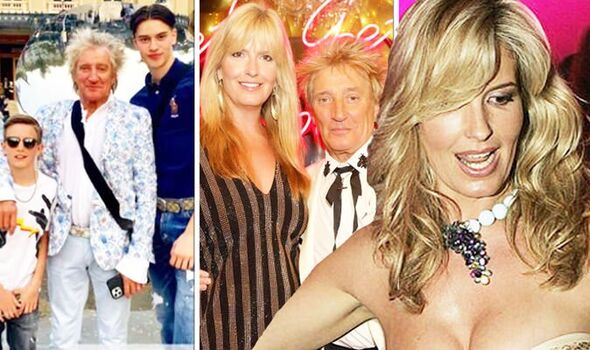 Sir Rod Stewart, 77, took to Instagram stories and shared a snap alongside his two youngest sons, Alastair Stewart, 16 and Aiden Stewart, 11, who he shares with his wife Penny Lancaster, 51.

The Maggie May hitmaker looked dapper as he stood between his two children.

The music legend sported a white shirt which he teamed with a floral blazer and pale blue trousers.

The rocker finished off his stylish appearance with a pair of blue trainers as he posed alongside his boys.

His eldest son Alastair towered over the musician while his sibling Aiden rocked a pair of dark sunglasses.

Just a few hours after Rod posted the picture on his stories, his other half decided to share some throwback snaps which she cheekily branded “before the children.”

The first photo was of the model and Loose Women panellist looking chic in a lilac dress which she paired with a blue necklace.

Her signature blonde tresses flowed effortlessly over her shoulders.

A second photo showed the beauty dancing in a tight dress which gave a glimpse of her cleavage.

A third snap was of Penny and Rod as the couple beamed at the cameras.

The photos were taken when Penny attended the Cannes Film Festival in 2005.

The Loose Women star captioned the post: “Through back Thursday #cannesfestival #beforechildren.”

Sir Rod Stewart posed for a photo alongside Alastair and Aiden Stewart.

Penny Lancaster was the epitome of chic as she posed at the star-studded event.

Penny Lancaster let her down as she danced at an afterparty

Penny Lancaster sported a very busty gown as she showcased her enviable physique and ageless looks.

The trio was all smiles at the star-studded Cannes Film Festival.

Penny Lancaster and Sir Rod Stewart were all smiles

Penny Lancaster and Sir Rod Stewart tied the knot in 2007.