Nothing says ‘festive holiday season’ like a ‘Game of Thrones’ dinner. But that’s what makes Tim McGraw, Faith Hill and their daughters so awesome, as they dressed in costume for a ‘GOT’-themed meal.

Winter is coming! Tim McGraw and Faith Hill have come up with an amazing new holiday tradition. The country superstars and their three daughters dressed in costume for a Game of Thrones themed dinner at their Nashville estate. It looks like they did the best they could with costumes, as for the most part the outfits, crowns, and accessories appeared homemade and DIY rather than going to a costume store and purchasing something close to the real deal. Tim shared the family photos to his Instagram on Dec. 21 of everyone in costume and the pictures are amazing!

Tim, 53, and Faith, also 53, appear to be fans of The North when it comes to the iconic HBO series, which wrapped up its eighth and final season in 2019. Tim appears to be dressed as Jon Snow’s enemy turned friend and ally, Wilding Tormund Giantsbane. The “Live Like You Were Dying” singer dressed in a light grey fuzzy robe, which could replicate a costume from the fur and pelt wearing people of the North.

He added a somewhat raggedy looking red wig and beard in an attempt match Norwegian actor Kristofer Hivju, who played the character. Tim even had his hand up in the air holding a dagger and raised his arms in a hilarious attempt at looking menacing. Faith went all out when it came to dressing as the Night King, the leader of the White Walkers.

The “This Kiss” singer wore a silver crown with spikey tops, apparently trying to mimic the spikes that come out of the character’s head. Faith added silver makeup across her gorgeous face, and donned a shiny silver shirt and pants. Her top even had dark shoulder padding to make her look bigger and more threatening. 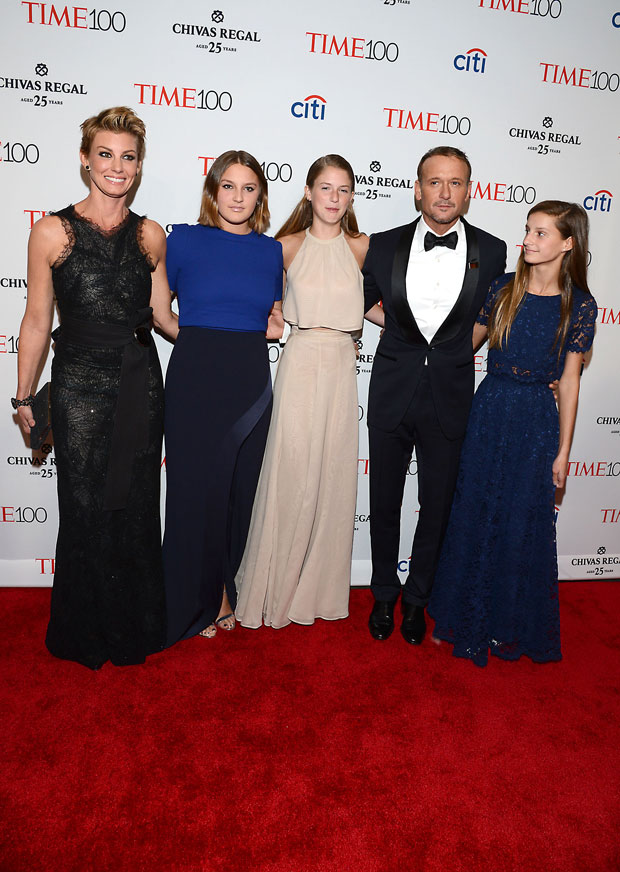 Oldest daughter Gracie, 23, appeared to be going as King Joffrey Baratheon, as she could be seen in a short blonde wig with a gold crown and a somewhat regal looking robe. Her younger sisters dressed as the Stark sisters from the show, with 22-year-old Maggie wearing a long brown leather jacket with a sword tucked in the belt to go as Arya, while 19-year-old Audrey donned a red wig and more elaborate black gown to be Sansa Stark. In the photos, the family’s holiday lights could be seen in the trees of their yard, making it look extra festive.

“So we had a ‘Game of Thrones’ themed dinner at home with the kiddos. Merry Christmas!” Tim wrote in the caption of the photos, which made fans wish they were part of the fun family. “We killed it honestly,” Audrey proudly wrote in the comments. Fan @tia_lea_maria gushed, “You win everything,” about the McGraw-Hill family, while @abby.rose920 raved, “Way to set an example and show ways you can still have fun while staying at home.” While travel and larger family gatherings for the holidays have been highly discouraged due to the COVID-19 pandemic, Tim and his immediate family showed that being together is what counts and a little bit of creativity and fun can turn lockdown into an enjoyable bonding time.