10 surprising facts that could save your life

REVEALED: Ten fascinating facts that could save your life – including what to do if you’re caught in a rip current and how a ‘haunted’ house could KILL YOU

For the most part, the best thing trivia will get you is a few grand on Jeopardy or a gift card to your local bar. But if you’re really lucky, it just could save your life.

Thousands of Redditors have shared their expertise in a popular Reddit thread this week, answering the question: What random fact could save your life one day?

Here, FEMAIL has rounded up some of the best factoids, tips, and tricks — fact-checked and ready to help you live past a whole host of disasters. 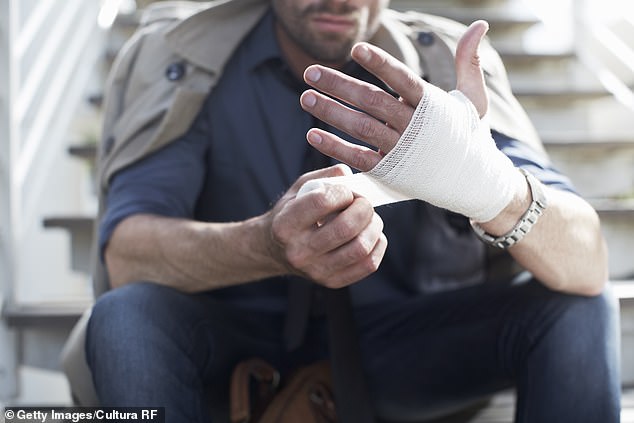 Smart trivia! A Reddit thread is filled with facts and tips that could be life-saving

Don’t replace gauze — double it up

Most people know that if a person is bleeding is bleeding profusely, the best thing to do is to use a compress to apply pressure. Ideally, you can also elevate the area that’s bleeding above the heart to slow the flow.

But if the injured party bleeds through that compress you’re using, do not remove it to apply a fresh one.

Instead, Harvard Medical School says to add the second compress on top and continue to apply pressure.

Even if the bleeding stops, don’t remove the compress until a medical professional can take over.

When you’re so freezing cold that you’re shaking and shivering, you might worry that it’s hypothermia. But if you’re still shaking, your body probably hasn’t dipped below that dangerous threshold of 95°F (35°C) just yet.

However, if you notice a friend has stopped shaking and is tired and falling asleep, that really means trouble.

As the body’s temperature drops to low levels, it slows down — and the person will often feel tired and start to fall asleep.

So if you’re with a friend or family member in freezing temperatures and they insist on taking a nap, getting them inside will likely save their life.

A ‘still’ tornado is actually coming right at you

The Tornado Project confirms that if you see a tornado and it doesn’t look like it’s moving, it may be moving toward you — so don’t assume you’re OK standing where you are and watching it from a distance.

If you’re outside and realize this is happening, the Storm Prediction Center recommends getting inside a sturdy building if possible. If not, get as far away from cars and trees as possible and lie flat, face-down on the ground — and protect your head with your arms

It’s not Casper, it’s a killer

‘If you think your house or apartment is haunted and have been seeing, hearing, or feeling a presence, get a carbon monoxide detector,’ advised one Redditor.

‘You may be hallucinating and this is potentially lethal.’

Dozens of experts back this up, pointing out that symptoms of carbon monoxide poisoning include hallucinations and confusion — hence why you think you spotted a poltergeist or swear you saw something move of its own accord.

Smash the edges of a car window, not the center

If you need to break a car window open — like, say, because it’s boiling out and a baby or animal is trapped inside — don’t swing a blunt object at the middle of the glass.

Instead, aim for the edges of the window, which are the weakest points and more likely to give way.

It’s also best to choose the window furthest from the person trapped inside, since the glass is likely to shatter everywhere.

If you belly hurts a lot on the lower right side, check for Rovsing’s sign to see if it’s appendicitis.

Simply push down on the other side of your stomach — the lower left quadrant — and see if that produces more pain on the lower right side.

If it does, get to a doctor immediately.

If the tide suddenly goes out too far, get away fast

As one Redditor explained: ‘If you are at the beach on vacation and one day ask yourself where all the water is gone, far beyond normal tide, run!!!

This is a sign that a tsunami is coming.

In the past, beach-goers who have stopped in confusion to watch the disappearing tide and ended up dead.

Swim parallel to the shore in a rip current

Getting caught in a rip current — on that moves dangerously fast away from the shore — can be terrifying. While it’s tempting to try to swim against it and back toward the shore, don’t do that.

Instead, either stay still and try to flag for help, or swim parallel to the shore. If you do this, eventually you’ll swim out of the current altogether.

The best place in a fire is near the ground

If you’re in a building that’s on fire and you can’t easily get out, drop to the floor. Smoke from the fire will travel up, making it harder to breathe higher in the room.

Kick yourself out of icy water

First thing’s first: When you fall into icy water, don’t panic. Your body will automatically react, going into shock for one to three minutes. Do your best to wait this out and stay calm.

Then, get to a solid piece of ice that hasn’t broken off and place your arms above it. Kick your legs to help your body get horizontal, which will make it easier for you to drag your body up onto the ice.

Once you’re there, don’t stand up and walk away. Roll your body first until you get to more solid ground. When you’re standing, all of your weight is concentrated on a smaller area and is more likely to break the ice again.