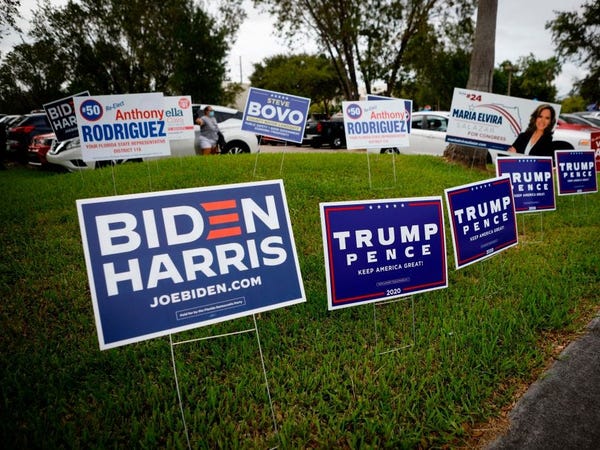 The adage that opposites attract is being put on display this presidential election season, as couples take to their front lawns to voice their differing political views.

The two told ABC 7 they hope their open willingness to civilly disagree will inspire other married people. But it isn't always easy to avoid make the political personal.

A majority of people currently using dating apps like Dating.com would never consider dating someone with different political views, according to a recent study. For those who do make the choice to date someone on the opposite side of the political spectrum, tensions can easily arise.

A group of women felt so strongly about their husbands' choice to vote for President Donald Trump, they formed a support group

The "Wives of the Deplorables" Facebook group formed in 2019 after Carole Catherine found out her husband voted for Trump.

The group now has members all across the United States, all of whom are Democrats married to Republican supporters of Trump.

Members of the group told CNN the amount of time spent with their husbands as a result of the pandemic, coupled with the looming presidential election, has only made the support group more important.

More people are talking about politics on dating apps, but most users don't want to hear it, study finds

These key psychological differences can determine whether you're liberal or conservative

Americans increasingly see abortion views as non-negotiable in relationships, and the rise of dating apps may be responsible