Fancy an original Sidney Nolan work – one of his famous Ned Kelly heads, no less – for $200? Well, it's up for sale later this month.

There are a few catches. First, the estimated auction price of $200-$300 in the Bonhams catalogue is, frankly, likely a lowball figure. Secondly, it's not really Ned Kelly's head. "It's the exact opposite, in a way," muses Bonhams' Australian art specialist Alex Clark. It's the absence of Ned. 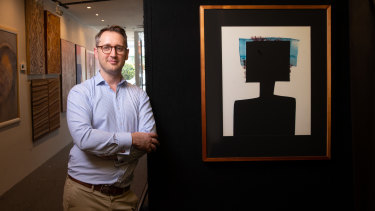 And to be honest, there's some disagreement as to whether it's even art. It's framed like an artwork. It was created by Nolan, and has paint on it from his hand. But …

Some time around 1961, Nolan cut out a template to make a Ned Kelly painting: that instantly recognisable stark silhouette that he began playing with in the 1940s. He was familiar with templates from his teenage days as a commercial signwriter.

"You need that hardness for that black, solid form. Nolan is referencing other modernists in that black square: it needs to have that solidity, that black, hard edge to the helmet and armour."

However this template, found in the estate of Lady Nolan, who died in 2016, is the only one of its kind that the estate is aware of. Her husband died in 1992 and left behind reams of art and artefacts at The Rodd, their home on the Welsh border.

The template remains a bit of a mystery. The auction catalogue states that it was "used by Nolan to create iconic images of the helmeted figure of Ned Kelly", and a smear of sky-blue paint across the helmet and smudges of a darker colour around it testify that it saw artistic action. But Clark can't work out which, if any, finished painting it was used for.

"It could be a Ned that never was," says Clark. "But it shows the way his mind was working at the time." The element of reproducibility echoes or anticipates pop art (Andy Warhol launched this scene in 1961, and his famous soup can paintings would be exhibited in 1962).

The template is the first lot of 124 of Nolan's works going to auction on November 24 – the third and biggest in a series of sales from the estate. The art in this sale represents a dizzying range of sizes, eras and subject matter, though the Kelly square keeps popping up.

"It's a large number of works to put on the market, but it's an estate that has to be wound up," says Fraser. The works include paintings that were hanging at The Rodd, or had at some point, as well as some that Nolan produced but never exhibited.

"He was a prolific artist," Fraser says. "He didn't produce work purely for exhibition, he was constantly in his studio experimenting, trying to innovate."

When they found the Ned Kelly template, Fraser wondered whether to sell it or "consign it to some archive somewhere".

"It's an interesting artefact," he says. "But it's not an artwork. It's more like selling an artist's palette or easel. I don't believe it's an artwork because Nolan didn't make it as an artwork. But it would look great on somebody's wall."

The auction also includes Nolan's first modernist landscape, titled Selby, painted in 1937 on a trip to the country with an art school mate, where they ate tripe, quaffed Madeira wine and waved their rifle at a local hotelier.

The art is in exhibition (by appointment) at Bonhams in Armadale until Sunday, then from next week in Woollahra, Sydney. The auction is in Sydney on November 24. Here's How Khloé Kardashian Feels About Tristan Thompson's Boston News
We and our partners use cookies on this site to improve our service, perform analytics, personalize advertising, measure advertising performance, and remember website preferences.Ok