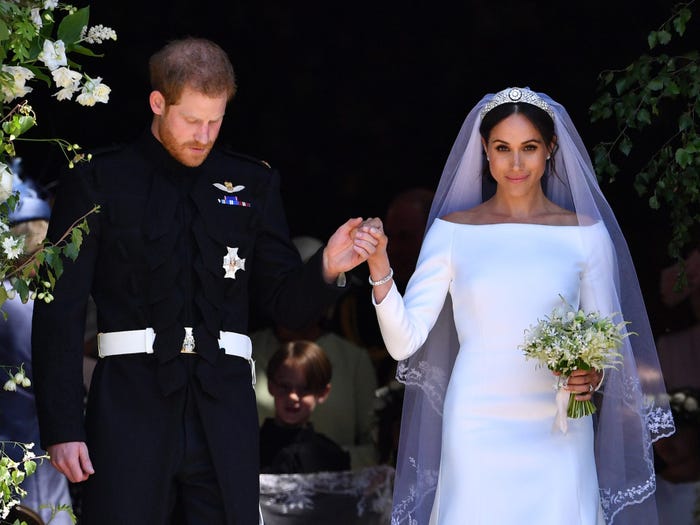 The woman who helped create both Kate Middleton's and Meghan Markle's wedding dresses said she is now on the brink of homelessness due to the ongoing pandemic.

Chloe Savage opened up about how her once-flourishing embroidery business — which saw her work displayed on two of the most famous women in the world — has almost completely disappeared as the coronavirus crisis continues.

"It's been horrific," Savage, 43, told People's Phil Boucher. "We've had all our work literally dry up. My 14-year-old daughter is skipping meals to save on the food budget. The stress is getting to her and she is self-harming too. So, she's now going to Child Mental Health Services to get support."

Business was once booming for the royal embroiderer

Savage has worked on projects for Victoria Beckham and Daniel Craig, and her creations have even appeared in the "Harry Potter" films.

But no spotlight on Savage's work was brighter than that of Middleton's and Markle's royal weddings, which were watched by millions of people around the world.

Savage worked on both women's gowns while she was at the Royal School of Needlework in Hampton Court Palace, the former home of King Henry VIII.

"Kate came in a few times, she was lovely," Savage told People. "The usual blushing bride. She was excited about the dress, nervous about the day, questioning what we were doing … all that sort of stuff."

Savage said she helped appliqué all the lace to Middleton's gown and shoes, and also worked on her blue silk and white lace garter.

The embroiderer wasn't in the office when Markle came in to see her dress, but Savage did work on the 16-foot veil that Markle paired with her Givenchy gown.

"It gave you snow blindness after an hour-or-so because you were constantly working white on white," Savage told People. "You start to go a little bit cross-eyed after a while!"

Markle's veil featured California poppies and flowers of the Commonwealth, a tribute to both her and Prince Harry's roots.

But as the UK went into lockdown due to the pandemic, Savage said her contracts were put on hold and her projects disappeared

She made the decision to shut down her Chloe Savage Embroidery studio. Although she received a $30,000 loan from the UK government, almost the entire check had to go to paying for the studio's bills, she told People.

Savage, who currently lives just outside Bristol, England, told People she is currently making around $250 a month from sales of her embroidery kits. Her parents have since turned their garage into a new studio for her, and are also selling her father's vintage Morris Minor car.

Savage said she's applied for welfare benefits in the UK four times but has been denied. She is now hoping that she might be able to get some work on an upcoming costume project for HBO.

"It might just keep us vaguely floating," she said. "As long as nothing goes wrong."