In November 1970, the BBC aired a new television show starring three young comedians who had risen up through the Cambridge Footlights in the 1960s, written and performed on various other comedy programs – including multiple collaborations with the men who would become Monty Python – and who now had the chance to create their own project. 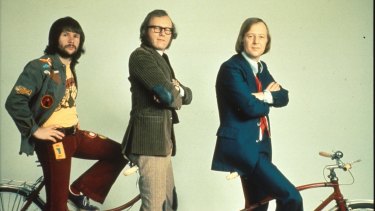 Bill Oddie, Graeme Garden and Tim Brooke-Taylor as The Goodies

Describing this show succinctly is a difficult task: you could say it was a show about three men who hire themselves out to do various jobs, but that would be a bit like saying The Simpsons is a show about American family life – accurate and wildly inaccurate at the same time. The explosively anarchic melange of slapstick, sight gags, surrealism, music, satire and demented character comedy that the Goodies brought to the screen was so impossible to categorise that the BBC itself wasn’t sure what to do with it, unable to decide whether it was a children’s or adults’ show. Despite this it ran for 10 seasons between 1970 and 1982 and entered the souls of its fans in a way that most shows can only ever dream of. 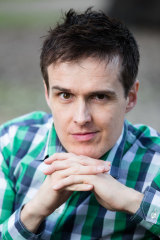 As the 50th anniversary of the birth of the Goodies passes, the passion for the determinedly bizarre trio – Graeme Garden, Tim Brooke-Taylor and Bill Oddie – remains strong in the faithful. In Australia it may be even stronger than in the show’s homeland, thanks to the ABC running repeats on a seemingly constant loop on weekday afternoons throughout the `70s and `80s. While Britons who missed the show’s first run had to wait decades before the series was fully repeated, a generation of Aussie kids grew up having their brains moulded by three absurdists extraordinaire – and for some, being inspired to give the comedy thing a try themselves. TV writer Marieke Hardy recalls: “It was a classic case of early `80s kid being plonked down in front of the TV – but ABC only, because my parents were left-wing. The Goodies were this weird-half-kid version of Monty Python, that beautiful surreal element.”

Similarly plonked was a young Andrew Hansen, who would go on to become a member of another group of televisual naughty boys in The Chaser. “I grew up with The Goodies, I used to recreate scenes from The Goodies at school. It was such a big deal for kids in primary school when I was at school, that it became a talking point in class, I mean the teacher couldn’t begin the class in the morning until she’d allowed us to have a formal discussion about what happened on The Goodies the previous night.”

The chord it struck with kids was especially notable given how much of the show was decidedly adult. The Goodies had plenty of jokes that likely flew over the heads of that after-school audience, but more than that: they took on, in their inimitably silly way, a range of fairly big subjects: the environment, racism, police brutality, censorship, for starters. It wasn’t a “kids’ show”, but it held a particular magic for the younger generation. 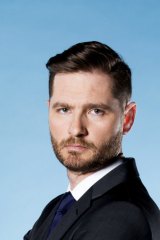 Goodies’ fan and presenter of The Weekly, Charlie Pickering

“I always made the assumption that they had a bunch of jokes there for the parents – good kids’ TV has a bunch of stuff for parents,” says The Weekly host and childhood Goodies addict Charlie Pickering. “Parents probably wouldn’t get as excited by the ridiculous rebellion against the power structures that was going round. As a kid, you get what’s going on, you get what they’re doing, you get that they’re like grown-up kids being annoying to grown-ups, and as a kid it gives you permission to have your own ideas about authority. It’s seditious is what it is.”

The Goodies’ was an idiosyncratic type of satire: neither rapier nor blunderbuss, but more like graffiti artists, covering serious subjects in a garish coat of spray-painted silliness to show up how stupid it all was. In one episode a parody of conservative activist Mary Whitehouse demands the Goodies make a sex education film without using the word “sex” – leading to the immortal production “How To Make Babies By Doing Dirty Things”. In another, the team encounters a villainous South African who is so racist he segregates his piano’s black keys from the white keys.

Ironically, it was episodes such as the latter that have caused the show to be viewed as problematic by some in more recent times – particularly for the fact that, like an alarming number of shows of the period, The Goodies occasionally employed blackface. “In some ways, it’s hugely problematic politically, like a lot of things,” says Hardy. “If we turn a pretty sharp lens on comedy, some of it is really uncomfortable to watch through 2020 eyes.” 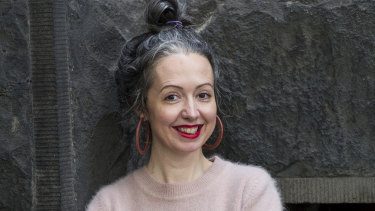 Hansen muses, “I’m sure their heart was in the right place, but it was made in the context of the UK in the 1970s.” The problematic elements of The Goodies is probably less reflective of the creators’ politics than it is of the climate in which it was made, where a show could skewer the Black and White Minstrel Show – a program the group found abhorrent – while simultaneously committing some of the same sins as its target.

But why has this show, so much of its time, stuck with so many for so long? How did it last for over a decade in the first place – a phenomenal achievement for a normal show, let alone one as seemingly shambolic and ludicrous as this? Part of it has to do with simple joy. “The name The Goodies is entirely appropriate,” says Pickering, “because at its core it was just so much fun, and you could tell they were having so much fun making it … everything is done with such absolute joy.”

But behind the joy was serious comedy chops. “They were stonking good writers, and all three of them were naturally very funny performers both verbally and physically. And of course Bill was great musically as well,” says Hansen. Oddie’s music was a major feature of the show, and even gave the group a hit single in the `70s with Funky Gibbon.

With those musical numbers, rapid-fire visual comedy, slapstick sequences, Pythonesque surrealism and wordplay, allied to The Goodies’ own eccentric characters – camp super-patriot Tim, ever-scheming intellectual Graeme, and scruffy man-child Bill – the show attacked on a range of comedic fronts at once. That kind of eclecticism didn’t please everyone, but it made those who got the joke fiercely loyal. 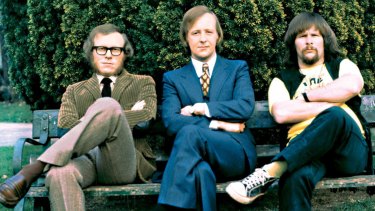 But could it be made today? “There’s no f—ing way you’d get that made now,” says Pickering. “There’s just no way. The networks and producers are too scared.” Hansen points out the big differences between the TV landscape then and now. “Shows were allowed to find their feet for a few seasons without being axed … most shows get cancelled within three minutes now.”

Yet even in 2020, you can find a little bit of The Goodies’ magic lurking, particularly in a certain Australian group that also features three strange men twisting reality to bizarre ends.

“In my lifetime, the closest thing I’ve seen to the same spirit that infused The Goodies is Aunty Donna,” says Hansen. Hardy agrees. “I would say Mark is Bill Oddie and Zach is Tim Brooke-Taylor and Broden is Graeme Garden,” she says.

To those who didn’t grow up with The Goodies, the magic may not be apparent. With its weird montages, outdated effects, and painfully `70s sets, it looks positively quaint. But there is something about a show made with unabashed joy, bent on finding the funny above all else, that resonates. In grim times like these, when nobody is untouched by the gloom – Goodies fans mourned earlier this year when Tim Brooke-Taylor succumbed to the coronavirus – such a show may be as necessary as it ever was. As Hansen describes it, “unbridled silliness – not soured by any darkness. I wish I could see more of it.”

Full episodes and clips of The Goodies can be found at dailymotion.com and Youtube.