Andrew Fitzgerald, Who Saved Men From a Storm-Sundered Ship, Dies at 87

Andrew Fitzgerald, the last surviving member of a Coast Guard crew that took a lifeboat out into the Atlantic in a raging blizzard in 1952 and rescued 32 of 33 merchant seamen clinging to the remains of a tanker that had split in half off Cape Cod, died on Thursday in Aurora, Colo. He was 87.

The Fairmount Funeral Home in Aurora said he had died at Peakview Assisted Livin. Mr. Fitzgerald left the Coast Guard months after the rescue and spent most of his life as an equipment salesman in Colorado.

It is often called the greatest small-boat rescue in the history of the Coast Guard, a feat of seamanship and courage in a 36-foot, engine-driven lifeboat that made international headlines and has been celebrated in books, magazines, documentaries and a Disney film, “The Finest Hours,” which was released in 2016.

“He doesn’t consider himself a hero to this day,” Mr. Fitzgerald’s wife, Gloria, who learned of the rescue two years after her marriage, told The Boston Globe in 2014. “He’d say, ‘It was three hours of work that we were supposed to do.’ ”

The rescue crew, in fact, were volunteers who risked their lives on what seafarers of that era regarded as a mission impossible.

Before dawn on Feb. 18, 1952, the 503-foot tanker Pendleton, with 41 crewmen and a cargo of oil and kerosene bound for Boston from Baton Rouge, La., was engulfed off Cape Cod in a shrieking nor’easter, one of the worst in memory, battered by blinding snow, winds exceeding 80 miles an hour and seas taller than a six-story building. 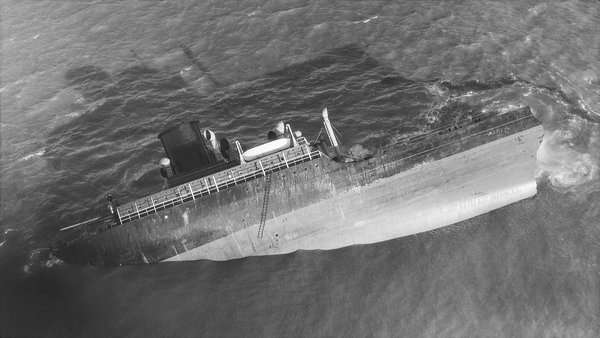 By 4 a.m., gargantuan waves were breaking over the stern. Welded hull plates groaned as the ship soared over the peaks and plunged into the troughs like a roller-coaster. Over the next couple of hours, explosive cracking noises shook the vessel, and at 5:50 a.m., the Pendleton, six miles off Chatham Light on the elbow of the cape, shuddered violently and broke in two.

“I was in my bunk,” Seaman Douglas B. Potts, a 31-year-old oiler, told The New York Times the next day. “There was a shock, and I looked out and saw the bow of the ship floating off to port.”

Separated amidships, the stern section rode the mountainous seas, spilling its cargo, but lost none of its 33 seamen. Many scrambled topside from bunks, a galley and fire and engine rooms, closing watertight doors as they went, a precaution that enabled the half-ship to remain afloat for more than 14 hours.

From the deck 40 feet above the waterline, and from compartments exposed like rooms denuded in an earthquake, seamen watched aghast as the bow section, with the bridge and radio shack, the captain and seven others, including most of the ship’s command staff, drifted away like an apparition in the storm.

There had been no time for an S.O.S. from the bridge, and there was no transmitter in the stern.

Over portable radio receivers, seamen in the stern learned that another tanker, the Fort Mercer, with 43 men aboard, had radioed an S.O.S. from 20 miles offshore. Coast Guard vessels and planes were on the way to the Fort Mercer, the broadcast said, but there was no word about the Pendleton. In fact, no one on shore yet knew that the Pendleton had split apart.

Hours later, a Coast Guard plane found the Fort Mercer sundered in two sections. As rescue operations began there, a radar station on Cape Cod discovered to the amazement of officials that there were actually four hulks floating off Cape Cod. It was the first sign that two ships had broken apart in the gale. Aircraft soon identified the hulks closest to land as sections of the Pendleton, and a second rescue was mounted.

Four Coast Guardsmen at Chatham Lifeboat Station, which was nearest to the Pendleton, volunteered for the mission. They were Boatswain’s Mate First Class Bernard C. Webber, coxswain of the anonymously labeled motorized lifeboat CG-36500, and his crew, Petty Officer Third Class Andrew Fitzgerald, the engineman, and seamen Richard Livesey and Ervin Maske.

Lifeboats are functional, not usually beautiful, and the CG-36500 was typical: a wide-beamed, low-slung wooden craft with a small wheelhouse in the stern, an enclosed compartment for the 90-horsepower engine amidships and a covered bow to afford protection for the crew and any rescued passengers in heavy seas. It was built for stability, and to hold about a dozen people, not three times that number.

Soon after plunging into the roiling Atlantic about 6 p.m., the lifeboat was hit by a massive wave as it crossed Chatham’s offshore sandbar. The CG-36500 was hurled into the air, fell on its side and righted itself as another wave struck, shattering the wheelhouse windshield, flattening Mr. Webber and destroying the boat’s mounted compass.

Navigating by dead reckoning, a seaman’s instinct, Mr. Webber piloted the boat through darkness and turbulence. After an hour, he found the Pendleton’s stern. Mr. Fitzgerald, manning the searchlight, picked out the shattered walls, shredded wires and dangling plates of a half-ship. It lurched dangerously, and the lifeboat made a cautious approach, Capt. W. Russell Webster said in an official Coast Guard account.

“The searchlight soon revealed a pitch black mass of twisted metal, which heaved high in the air upon the massive waves and then settled back down in a frothing mass of foam,” he wrote. “Each movement of the giant hulk produced a cacophony of eerie groans as the broken ship twisted and strained in the 60-foot seas. No lights were apparent as coxswain Webber maneuvered the small boat aft along the port side of the Pendleton’s stern section.”

The enormous stern and the tiny lifeboat fell into an ungainly dance, rising and falling in tandem, then drawing apart to soar and plunge randomly. As the lifeboat rounded the stern, its searchlight caught the name Pendleton. Lights on the starboard deck high overhead suddenly glowed. A man frantically waving his arms appeared and disappeared. Then seamen in orange life jackets lined up along the starboard rail, shouting unintelligibly down into the wind and crashing seas.

The lifeboat crew had no idea how to get the stranded men off. Suddenly, a Jacob’s ladder, a seamen’s device of ropes and wood slats, was thrown over the rail and unrolled down the hull. Seamen climbed onto the wildly swinging ladder and began to descend. The first to reach bottom leapt onto the lifeboat’s bow and was pulled in by the crew as Mr. Webber struggled to hold his boat steady.

A line of descending men overhead clung to the rope ladder as it swayed perilously out and slammed back into the hull. With every roll of the stern, Mr. Webber tried to maneuver his boat close to let another seaman leap aboard. It was not always possible. Many fell into the freezing sea, but struggled to the surface and grabbed a safety line rigged around the lifeboat’s shell.

Again and again, Mr. Fitzgerald, Mr. Livesey and Mr. Maske hoisted waterlogged men onto the deck and bundled them into the shelter of the forward hold, the engine compartment or the wheelhouse. As the lifeboat filled with human cargo, it became increasingly unstable, shipping water and complicating the pilot’s ability to maneuver alongside for the transfers. Finally, 31 survivors were packed in.

Two still on the stern deck were Raymond Sybert, who as chief engineer was the senior officer on the stern and would be the last man off, and Seaman George Myers, the ship’s 300-pound cook, who was known as Tiny. Believing he would not survive, he had given much of his clothing to shipmates.

Shirtless in the gale, Mr. Myers climbed down the ladder. Near the bottom, he either slipped or mistimed his jump and fell into the sea. He resurfaced momentarily, but Mr. Fitzgerald, Mr. Livesey and Mr. Maske could not lift him aboard. He was hit by a wave and hurled back into the water. They watched helplessly as he drifted away and was swallowed by darkness and the sea.

Moments later, the lifeboat crew pulled Mr. Sybert to safety just as the Pendleton’s stern rolled one last time, and in a roar capsized and sank.

A Throng at the Pier

Mr. Webber radioed Chatham Station with the news. About an hour later, the overloaded CG-36500 churned into Chatham Harbor with its exhausted crew and 32 survivors. A throng of local residents was waiting at a pier and helped them ashore. Many were sobbing uncontrollably.

All eight men in the bow of the Pendleton were lost. Cutters rescued 38 seamen from the Fort Mercer’s stern, but five, including the captain, were lost in the bow section, which sank offshore.

Books about the rescue included “The Lifeboatmen” (1985), by the pilot of CG-36500, Bernard C. Webber; “The Pendleton Disaster Off Cape Cod: The Greatest Small Boat Rescue in Coast Guard History” (2007), by Theresa Mitchell Barbo, John Galluzzo and Capt. W. Russell Webster; and “The Finest Hours” (2009), by Michael J. Tougias and Casey Sherman.

A memorial to those who lost their lives in 2018

The CG-36500, built in 1946, was decommissioned in 1968 and given to Cape Cod National Seashore. Without funds for restoration, the boat deteriorated until it was acquired by the Orleans Historical Society on Cape Cod. Volunteers restored it, and it became a floating museum, visited by thousands every year.

Mr. Fitzgerald left the Coast Guard eight months after the rescue and returned to the town where he had been born, Whitinsville, Mass., about 14 miles southeast of Worcester.

Andrew J. Fitzgerald Jr. was born there on March 19, 1931, to Andrew and Edna Fitzgerald. He worked at a machine shop, earned an associate degree in engineering at Worcester Junior College and in 1956 married Gloria Frabotta, who survives him.

He is also survived by a daughter, Dawn Huffman; a son, Michael; a brother, Bill; four grandchildren; and three great-grandchildren. Mr. Fitzgerald’s family requested that donations in his memory be made to the Alzheimer’s Association in Denver.

Mr. Fitzgerald sold electric motors and clutches in New England before moving to Denver for his employer. He sold precision inspection equipment there until he retired in the 1990s.

The inscription on their Coast Guard medals read: “In testimony of heroic deeds in saving life from the perils of water.”