The name is Eilish. Billie Eilish. The Oscar-nominated singer joined her brother, Finneas, for a stirring and haunting performance of their song, ‘No Time To Die.’

James Bond has no time to die, but everyone had time for Billie Eilish at the 94th Academy Awards. During the Mar. 27 event, Billie, 20, and her brother Finneas O’Connell, 24, performed their Oscar-nominated theme to the 2021 James Bond film, No Time To Die. As expected, Billie brought the sultriness, the sexiness, and the espionage eleganza with her performance, singing with the heartbreak within the song’s lyrics. After changing out of the ruffled gown she wore on the red carpet into a silky suit, Billie took to the stage while Finneas sat at a grand piano. “That I’d fallen for a lie,” she sang to a packed Dolby Theatre in Los Angeles. “You were never on my side / Fool me once, fool me twice / Are you death or paradise? / Now you’ll never see me cry / There’s just no time to die.”

This isn’t Billie’s first time performing at the Academy Awards. At the 92 n Oscars in 2020, Billie was tasked with performing The Beatles’ “Yesterday” for the In Memoriam segment, honoring those who passed away in the previous months. The sultry and wispy performance was trademark Billie, but she later told Apple Music’s Zane Lowe that she was “sick for all of the Oscars” and that she thought she “bombed that performance. That was trash.”

Billie explained that, at the time, she felt like a fish out of water performing at an awards ceremony that honored actors. “I’m not used to that,” she said, per Rolling Stone. “At least the Grammys wasn’t as scary because it was, like, artists. And it felt like my people, it felt like, ‘Oh, look, a bunch of artists!’ And I knew a lot of them already, and I’d met them, and they knew of me.” 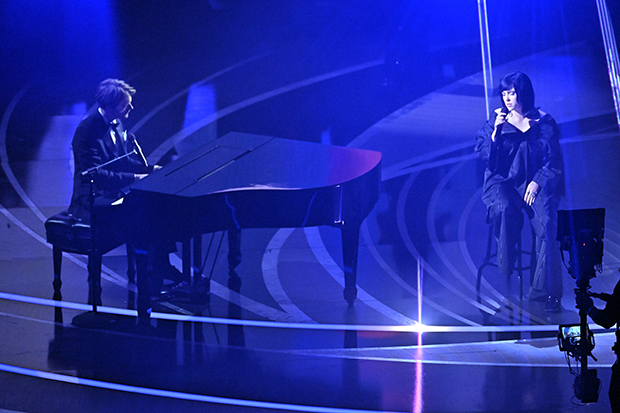 During this 2020 interview with Lowe, Billie talked about her and Finneas’s theme for No Time To Die. She premiered it in February 2020, unaware that the COVID-19 pandemic would arrive on American shores and cause the move to be delayed until October 2021. Being that it was part of the film’s original soundtrack, it was still eligible for the 2022 Academy Awards, despite being two years old.

“You know what’s funny about it? Like, two years ago, we were like, ‘Wouldn’t it be crazy to make a song for the Bond movies, and, like, wouldn’t that be dope?’” Billie said in that 2020 interview. “And so, kind of for two years-ish, we’ve been subconsciously trying to … in our own way. And, like, we’ve written songs that have never come out that are like, ‘Oh, this sounds like Bond, like, this would be dope, like, it would never happen, whatever.’ And then this offer came up, and we were like, ‘Ahhh!’”