Prime Minister Scott Morrison will continue flying between Sydney and Canberra under exemptions from health rules that restrict movement, arguing the government “still needs to function” and he must be able to cross the border to do his job.

Hours after Labor accused him of “appalling judgement” for making a flying visit to Sydney to see his family on Father’s Day, the Prime Minister said he was no different from other essential workers in needing to move between cities. 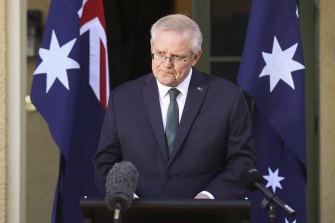 Mr Morrison said Labor disability services spokesman Bill Shorten was playing “cheap politics” on the issue by criticising the weekend flights because all federal MPs knew they qualified for exemptions when going to Canberra for work.

“I mean, the government still needs to function. And we return home when we’re able to return home. That hasn’t happened that often this year, I’ve got to tell you, but that’s the nature of the job and we all accept that,” Mr Morrison told Sky News.

“But the suggestion that somehow this was an unusual arrangement for members of Parliament, indeed ministers, well, that just wouldn’t be true.”

Mr Morrison flew from Canberra to Sydney last Friday one of the Royal Australian Air Force’s business jets, a Dassault Falcon 7X, and returned to Canberra early on Monday morning.

Flights between the two cities cost $2118 each way in the most recent Schedule of Special Purpose Flights released every six months by the Department of Defence.

Mr Morrison did not need special approval to fly to Sydney but his return flight required approval from the Australian Capital Territory, which has banned entry from NSW to Canberra except for those who live in border neighbourhoods or gain exemptions from health authorities.

The territory’s Chief Health Officer, Dr Kerryn Coleman, granted the exemption and appears likely to do so again because the ACT government considers members of Federal Parliament to be essential workers who need to cross the border.

While the flight triggered strong criticism of Mr Morrison on social media, Labor was divided on whether he should cross the border.

Mr Shorten said Mr Morrison had shown “appalling judgement” in making the trip to see his family on Father’s Day when others could not do the same.

“It’s not that he doesn’t deserve to see his kids but so does every other Australian. And I think that when your people are doing it tough, you’ve got to do it tough, too,” Mr Shorten said.

“He did it within the rules and I’m not going to be too critical,” Mr Fitzgibbon told Sky News.

Mr Morrison posted a Father’s Day message on social media on the weekend showing him with his wife, Jenny, and their two daughters in a photo taken in February at the launch of a day to commemorate four children killed by a drunk driver, but he made no mention of his presence in Sydney.

Asked by Sky News Kieran Gilbert if he had been trying to “cover up” the visit, Mr Morrison said: “Of course not”.

The Prime Minister has been criticised for his travel in the past, including a family holiday in Hawaii in late 2019 and a brief visit to a village in Cornwall after the G7 summit in the United Kingdom in June this year, but he rejected the claim he had posted the photo to mislead people.

“In politics, people like to take a lot of swings at you, and you get pretty used to that, but sometimes those jabs can be low blows,” he said.