China to use more of its own coal, cutting Australian imports: analysis

China has expanded the capacity of rail lines between its domestic coal fields and its industrial heartland so quickly it will be able to cut imports by 25 per cent by 2025, dealing a serious blow to Australian exporters, analysis has found. 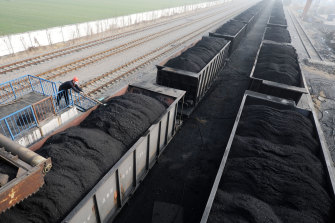 A worker shovels up coal on a freight train in Huaibei, Anhui province in January.Credit:HUANG SHIPENG/Future Publishing via Getty Images

China has been reliant on imported coal during its boom over recent decades because it did not have the infrastructure to move its own coal around the country quickly and cheaply enough to meet demand.

But due to an infrastructure building boom prompted by a political determination to achieve energy independence, domestic coal infrastructure is now catching up with demand, Gosens said.

One of China’s new rail lines, the Haijo coal railway, was commissioned in 2014 and completed in 2019, linking coal fields of Inner Mongolia with central China’s heartland. It can move 200 million tonnes of coal per year, which is equivalent to all of China’s thermal coal imports, or all of Australia’s global thermal coal exports.

Gosens said the ANU’s model was more sophisticated than other models that had already predicted a decline in the global seaborne coal trade for the same reasons.

He said it was now clear the Chinese government was determined to meet global commitments it had made to see its carbon emissions peak by 2030, and that thermal coal use would peak before that as technologies to replace it already exist.

As it phases down coal use, China is determined to replace imports with domestic supply, he said.

China’s rapid transition has been disrupting global energy markets over recent years. In February the global energy consultants Wood Mackenzie released a report showing China’s production capacity for solar modules is rising faster than forecast global demand, while its wind turbine component and battery manufacturing capacity would grow by 42 per cent and 150 per cent, respectively, over the next two years.

“This production of epic proportions is enough to meet what China needs to accelerate decarbonisation while supporting the ambitions of much of the rest of the world,” said Wood Mackenzie research director Alex Whitworth.

Gosens said China’s decarbonisation coupled with its use of domestic coal called into question the support both major political parties have voiced for Australia to support the industry in the long term.

“It is bad policy-making to be telling people that these industries will continue to exist for the next few decades,” he said. “I think it is dishonest to those communities.”

Labor’s Shadow Minister for Trade and Resources Madeleine King said coal would be a part of Australia’s energy and export mix for years to come.

“If new projects stack up environmentally and commercially then they will, of course, go ahead. And if they stack up, we welcome the jobs.

“Export industries are always subject to changes in the economies of our trading partners. Australia needs to diversify both what we export, and the countries we export to.“

The government and the Minerals Council of Australia did not respond to a request for comment.

A guide to the environment, what’s happening to it, what’s being done about it and what it means for the future. Sign up to our fortnightly Environment newsletter here.