The fathers still traumatised by the birth of their children

For most parents, the birth of their child ranks among the happiest days of their lives. The new arrival leads to a stream of social-media updates of an ecstatic but exhausted mum and doting new dad holding their pink, squishy bundle of joy. 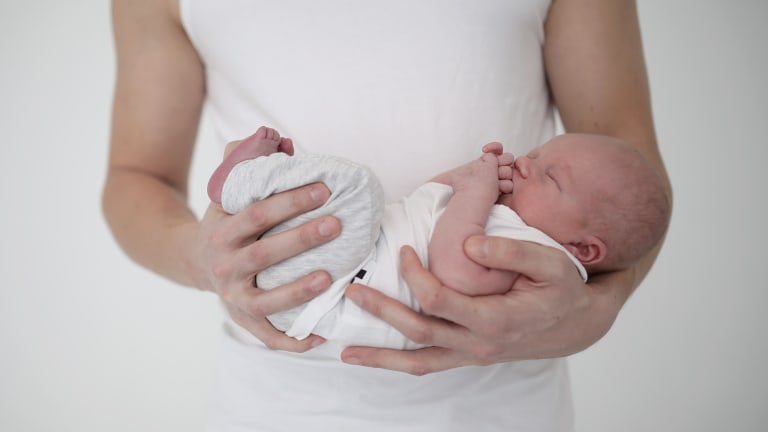 “He sat there crying when she was born and stayed away from her, scared she wasn’t okay.”

But despite the images, things don't always go to plan in the delivery room, and when they do go awry, the focus is naturally on the mother. What's often overlooked is that some men can be severely traumatised by what they witness, especially if their partner, or baby, or both, are distressed during labour.

"Birth shocks a lot of fathers," says Dr Rakime Elmir, a Western Sydney University lecturer who has studied post-traumatic stress disorder (PTSD) in men following birth. "They have high expectations of everything being normal and then they are faced with the possibility of being a single father."

She believes there is too much pressure on men to be in the delivery room. Her study found that some men were unprepared, and at times didn't want to be there, yet felt pressured to be present to support their partner.

Elmir's research found that the symptoms of PTSD displayed by men following birth include aggression, hypervigilance and detachment. Fathers might also have flashbacks and nightmares, be detached from their baby, and reluctant to be intimate with their partners.

The number of men affected is unknown as so few come forward and services dedicated to helping men in this area are limited, Elmir explains.

Phillip Boyce, professor of psychiatry at Sydney's Westmead Hospital, says several factors contribute to men experiencing PTSD after labour, including the fact that many have not been in a medical situation or seen blood before. Men can also feel powerless during labour, particularly if there is an emergency situation. Also, no one really pays much attention to the father during the birth and generally there is no one to debrief with afterwards.

"They are supposed to be the joyous father," says Boyce. "All the attention is on any trauma the woman may have suffered and the difficulty of the labour for the woman, so they are often not able to speak about it. When they do, they are often made to feel a bit silly because they didn't go through the birth."

Here are three stories of fathers still affected by the traumatic births of their babies.

Nine years have passed since the birth of his first child, but 44-year-old Brad is still shaken by the experience.

Brad's wife Candice's first labour was like a scene from a romcom movie. She was about to deliver their daughter, but all eyes were on her husband, who was curled up in the foetal position in a corner of the room, rocking back and forth.

"The last thing I remember before pushing her out was seeing him like this," Candice, 37, recalls. "Even my support person had to attend to him. He sat there crying when she was born and stayed away from her, scared she wasn't okay."

Twenty hours into Candice's 37-hour labour, doctors thought she was having a heart attack and everyone started panicking – including her husband.

"They told me my heart was stopping," she says. "They gave me pethidine without my consent and the baby became distressed, too. I went into shock and haemorrhaged."

Candice says Brad was patronised by the staff and treated like he didn't exist. "No one was explaining what was going on. They yelled at him and told him they didn't have time to talk to him."

After their baby Sarah was born, Brad was in such a bad way that the hospital wouldn't discharge Candice into his care, fearing he wasn't well enough to support her. "He slept for days and doesn't remember anything of the first three weeks of our daughter's life," Candice recalls. "I couldn't talk to him about it, so I couldn't deal with what had gone on in the birth either."

Brad was left with an intense fear of birth, and it took years of pleading from Candice before he finally agreed to have another child. "He said he wouldn't go to the second birth and we agreed on that," she says. "He couldn't even go to the midwife appointments and he was still angry with the way he had been treated by the hospital staff the first time."

Three days before the labour, Brad decided he should at least be at the hospital for the birth. "Just before Rose was born, the midwife went out to get him," Candice says. "He thought the baby had been born. When he walked into the room and realised she hadn't, he went pale. He won't talk about that birth either."

The third time Candice became pregnant, Brad was adamant he wasn't going to the hospital. But when Candice went into labour Brad had to drive her there as the contractions came hard and fast.

"The nearest hospital was 45 minutes away and he panicked," she says. "He wanted to pull over and call an ambulance. He thought he'd have to deliver the baby."

Their third baby, Annabel, arrived so quickly when they got to the hospital that Brad had no time to leave, or think. Fortunately, with no complications and no time to dwell on the situation, he coped. However, he has still not come to terms with the birth of his first-born, and still turns grey at the mention of it.

The unexpectedly early arrival of their baby has left Mick, 37, still waking in terror at night – three years later.

Melbourne dad Mick says his clinically diagnosed PTSD was triggered by his wife Melanie's waters breaking when they were standing in the queue at the supermarket. She was only 30 weeks pregnant and the couple had just attended their first antenatal class.

They rushed to the hospital where they were swamped by a team of doctors, but were told very little until just before their daughter, Edeline, was born. "It was one of the scariest things I have ever experienced," Mick recalls. "We didn't even know she was going to give birth until 20 minutes before."

He says the room was filled with doctors and paediatricians talking about the issues they may face and the potential complications, immediate and long-term, for his daughter.

"I felt completely powerless," Mick says. "There was nothing I could do. No way to comfort my wife."

It was three weeks before Mick was able to hold Edeline. She was in a humidicrib for four weeks, on oxygen for five weeks, and not feeding well. When his wife and daughter finally returned home, Mick felt he had to hold himself together to look after his family. About a month later, his wife and daughter were admitted to a mother-and-baby facility and Mick suddenly found himself alone.

Realising he was struggling, he reached out to friends and family who encouraged him to see his doctor. His wife, now 35, also suffered PTSD and their treatment has cost them $30,000.

Three years on, Mick still wakes in the night terrified by the noise of hospital monitors beeping in his head.

"I have had such a roller coaster of emotions over the last three years," says Mick. "The ups and downs of PTSD have taken years to fix. I will never forget the issues, but they do get smaller as time goes by."

The shock of an emergency caesarean for their first child had Thuy, 44, worried about how he'd cope with the arrival of their second baby.

When Brisbane dad Thuy was just weeks away from welcoming his second child, he was still fighting the anxiety he suffered during the birth of his first baby three years before. On that occasion, his wife Fanny's labour had lasted 36 hours before ending with an emergency caesarean.

"I felt so helpless and anxious," he says of that first birth. "You don't know what is happening and we were pushed towards an ending where we didn't know what the outcome would be. I was in the background trying to help her and didn't realise what I was going through at the same time."

Thuy had no idea what to expect during the labour, or what he was supposed to feel afterwards, so he didn't know if his reaction was normal.

Having to suppress his emotions to look after Fanny and their newborn baby meant the shock of the birth didn't hit Thuy until almost a year later, when he found himself dwelling on every aspect of the labour and questioning each decision made.

"It was a shock seeing someone you love being put through pain and torture [during the induction process]," Thuy recalls. "And then all of sudden I was dressed in a blue gown going into the operating theatre and pop, this baby came out."

When the arrival of their second baby was imminent, Thuy's anxiety levels started rising again. He worried that he hadn't come to terms with what had happened the first time – and that those feelings would return. But when Thuy and Fanny, 39, had their second baby it was a much better experience for everyone. They underwent a planned caesarean, the staff were helpful and they were back in their room with their newborn within the hour.

Thuy says the fact that it was all planned helped enormously, as there were no surprises and nothing was rushed. "We blinked and it was all over," he says, beaming.

This article appears in Sunday Life magazine within the Sun-Herald and the Sunday Age on sale August 5.