‘I’m a wreck!’ Viewers are left in tears as Ken, 87, explains to Lily, four, why a chick won’t hatch from its egg as the children learn about life and death on Old People’s Home for Four-Year-Olds

Viewers of Old People’s Home for Four-Year-Olds were left feeling emotional as the children learned an important lesson about life and death on tonight’s episode.

The residents of Lark Hill retirement village, in Nottingham, and their nursery school-aged companions were given an incubator full of unhatched eggs to monitor as the three-month-long Channel 4 experiment continued.

Children and adults alike waited patiently for the first signs of life and were delighted when the tiny yellow chicks began to emerge.

However after a few days the final chick had still yet to hatch from its egg and it was up to the nursery teacher to break the difficult news that the chick was not strong enough to break out of its shell.

Four-year-old Lily was among the children who struggled to understand and turned to her ‘best friend’ Ken, 87, to ask in desperation: ‘But how can we get it out?’ 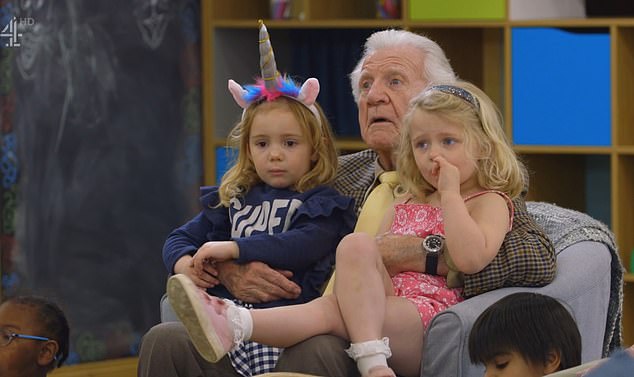 The residents of Lark Hill retirement village, in Nottingham, and their nursery school-aged companions were given an incubator of unhatched eggs to watch. Ken, 87, had to tell Lily, right, and Lis, left, there was nothing they could do to help the last chick when it failed to hatch 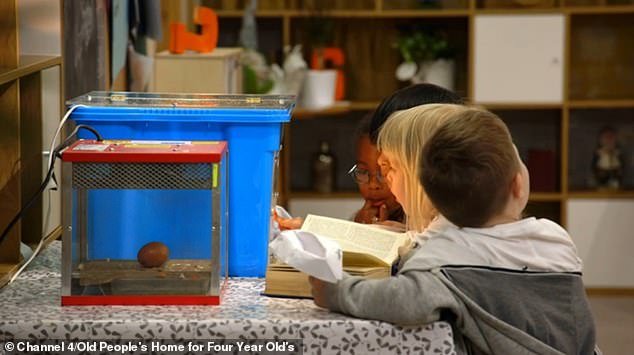 The children had been closely monitoring the chicks, watching them hatch before transferring them from the incubator to the blue hut. However the nursery teacher eventually had to break the difficult news that the final chick was not strong enough to break out of its shell, pictured

The moment held particular poignancy for the pensioners, who reflected on being in the ‘winter of their lives’. The scenes left viewers overcome with emotion, pictured

The moment held particular poignancy for the pensioners, who reflected on being in the ‘winter of their lives’.

The scenes left viewers overcome with emotion, with one tweeting: ‘Oh god I am in tears over an unhatched egg. RIP chick.’

‘Oh no I am getting weepy over an egg,’ added another.

Others were taken by the sight of 102-year-old Sylvia, the oldest resident taking part in the experiment, who refused to give up on the final chick and patiently sat by the incubator in the hope it might still break free.

One posted: ‘I’m crying at Slyvia waiting for the egg to hatch.’ 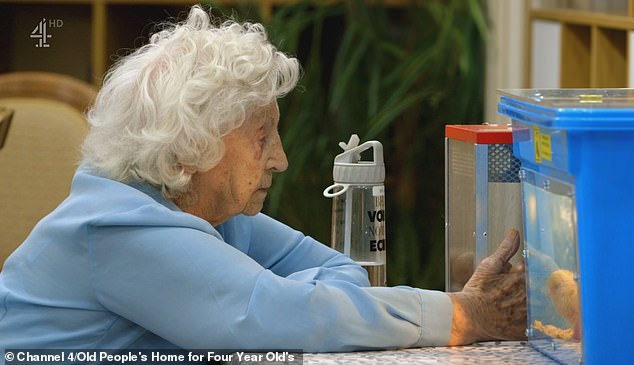 Viewers were moved by 102-year-old Sylvia, pictured, the oldest resident taking part in the experiment, who refused to give up on the final chick and sat patiently by the incubator 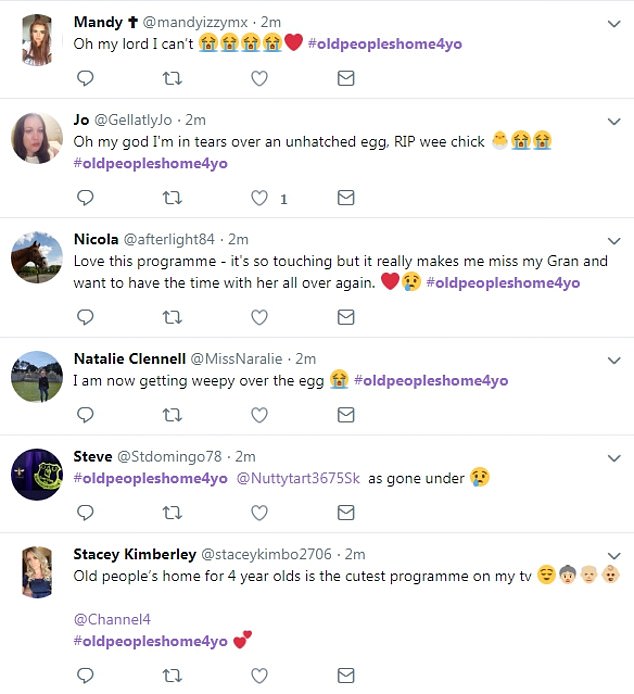 The documentary series has seen a group of four-year-olds placed with residents of a retirement village, building on studies that show mixing children with older people has huge benefits for both age groups.

Now halfway through, the retired residents and four-year-olds were tasked with carefully monitoring the chicks watching for signs of them hatching.

Already incubated for nearly three weeks before arriving at the retirement home, the first of the chicks successfully hatched within days and the excited group were able to enjoy spending time playing with them. 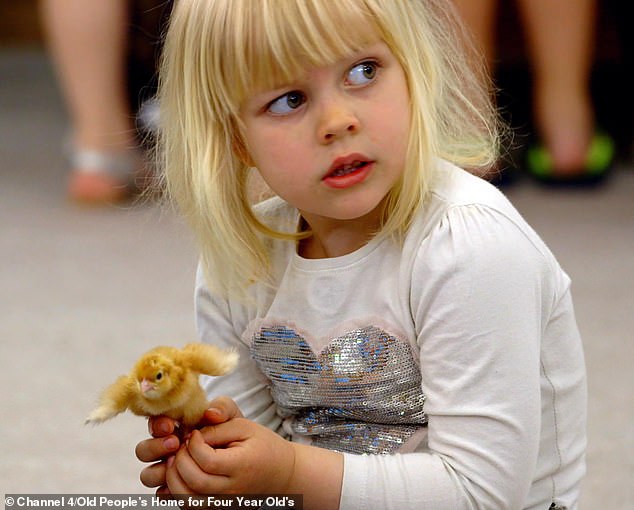 The first of the chicks successfully hatched within days and the excited group were able to enjoy spending time playing with them. Pictured, four-year-old Scarlett encouraged her friend Beryl, 85, to play with the tiny fluffy chick during the emotional scenes 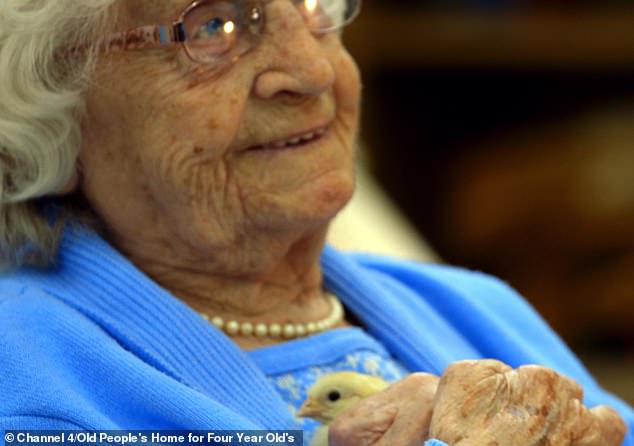 Sylvia, 102, was delighted to get some time to spend with the fluffy yellow chicks. After watching them hatch she had one to cuddle and stroke, pictured

But when one didn’t make it out of its egg shell, the children notified the nursery teacher what had happened.

Fred, 84, a retired film engineer, explains to Mason, four, that the chick just didn’t have the strength to break out. Mason seemed content with the fact the chick didn’t struggle alone and was helped by the others.

Dr James Brown, one of the scientists leading the experiment, said on Twitter: ‘That last egg… We tried folks, we tried.

‘But it was an important lesson for the children. The second from last to hatch also almost didn’t make it (that was the one which was a sod to the others).’

The task also proved an important point of reflection for the elderly residents. 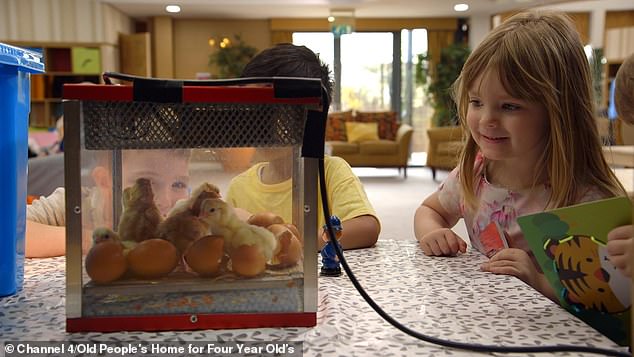 The chicks were brought in to Lark Hill retirement home in the Channel 4 programme Old People’s Home for Four Year Olds and drew much excitement as they hatched, pictured 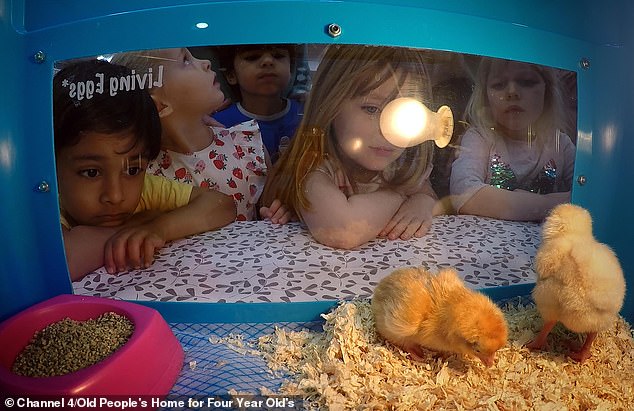 The unhatched eggs were brought in an incubator with the children monitoring them closely to see how they hatched and developed before moving them into a hut, pictured

‘People say there’s a life after death but I don’t think so. When you die that’s it.’

Victor, who at 97 is the second oldest resident and is seen dealing with some serious health issues in the episode said: ‘I suppose if you go to bed at night that’s it, and you don’t wake up again that is probably the best.’

Barbara added: ‘We’re in the winter of our lives now, we do know we won’t be here in 20 years time.’ 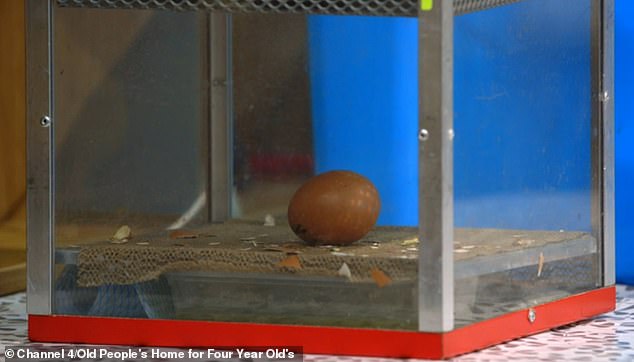 All but one of the eggs hatched, pictured, with the children realising that one had sadly not made it and that it hadn’t grown strong enough to break out of its shell

Dr James Brown, one of the scientists who is part of the experiement, tweeted following the sad news that they tried their best to save the chick but unfortunately it didn’t work