Glynn S. Lunney, a legendary NASA flight director who went on duty moments after the Apollo 13 spacecraft exploded on the way to the moon and who played a pivotal role bringing the crew safely back to Earth, died Friday after a long illness. He was 84.

The death of Lunney, who was known to have battled leukemia in recent years, was confirmed by NASA.

Today we mourn the passing of legendary NASA Flight Director Glynn Lunney. He received the Presidential Medal of Freedom for his leadership in bringing the Apollo 13 crew safely home after an explosion in space. More on his legacy: https://t.co/hTujZF1QIA pic.twitter.com/ocW7X90Lny

Beginning his career fresh out of college in 1958, Lunney helped devise the complex, rigorously followed flight rules used to govern missions through the Mercury, Gemini and Apollo programs, and became NASA’s fourth flight director under the tutelage of the man who defined the role, Christopher Kraft.

Joining Kraft, John Hodge and Gene Kranz, Lunney held down shifts in mission control during the early years of the space program and eventually rose to chief of the flight director’s office at the Johnson Space Center through most of the Apollo moon program.

He later would manage the first joint flight with Russia — the Apollo-Soyuz Test Project — and serve as the space shuttle program manager in Houston. After retiring from NASA, he worked for Rockwell International, builder of the space shuttle, and later served as vice president of United Space Alliance, the company that serviced and maintained the shuttle for NASA.

“Glynn was the right person for the right time in history,” said Mark Geyer, director of the Johnson Space Center. “His unique leadership and remarkably quick intellect were critical to the success of some of the most iconic accomplishments in human space flight.”

In an interview with CBS News on the eve of the 50th anniversary of Apollo 11, Lunney said President Kennedy’s 1961 declaration that America would land astronauts on the moon “before this decade is out” was almost beyond belief — “semi crazy” — to the cadre of aerospace engineers charged with making it happen. 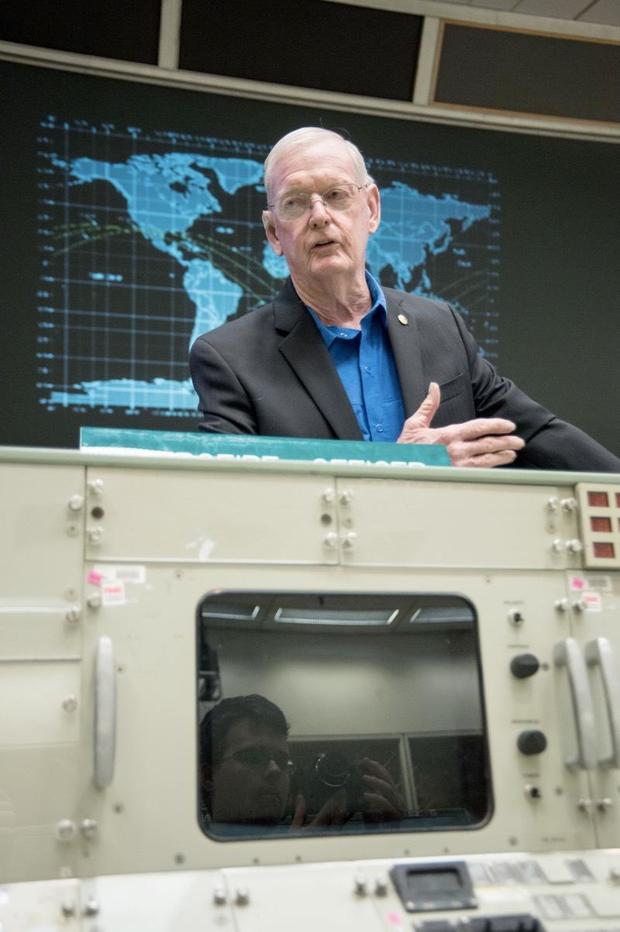 While Kranz was on duty when Neil Armstrong and Buzz Aldrin landed on the Sea of Tranquility on July 20, 1969, Lunney led the mission control shift when the crew blasted off after history’s first moonwalk, a make-or-break moment given the lunar lander Eagle’s single ascent rocket engine.

In the CBS interview, Lunney downplayed the pressure of the moment, saying the flight control team was well trained and ready for the historic milestone — even though most were in their twenties and just a few years out of school.

“A lot of people ask about that, the pressure on us to get it right and so on,” he said. “We were always aware of the significance of what we were doing. But we never psyched out about it. Yes, that’s what we have to do, and our attitude was, well, we’re trained as well as we can be trained. If the time comes when we have to do something difficult or change what we’re doing, we felt comfortable that we were ready to do that.”

And NASA had an ideal crew in Armstrong, Aldrin and command module pilot Mike Collins.

“I think we all felt that Neil was the perfect fit for the job,” Lunney said. “Buzz was very good at the rendezvous and at the extravehicular (spacewalk) work because he finally made the first successful EVA in the Gemini program. So we had a lot of talent there. And Mike Collins was always steady as a rock. He was very good at what he did.”

But Apollo 13 stands out as a “successful failure” that ultimately defined mission control and the “failure is not an option” mentality the team brought to bear. Lunney, the urbane, always calm engineer, and the more emotive Kranz, who inspired legions of flight controllers with his patriotic fervor, were opposites in demeanor but equally capable leaders.

“Glynn Lunney was one of the smartest and most considerate people I ever knew,” Wayne Hale, a former shuttle flight director and program manager, said in an email. “He was brilliant in building a team to accomplish a difficult task. … Inside the office, almost everyone knew of his critical role in the rescue of Apollo 13, which basically was omitted from the movie, about which he never complained.”

The explosion of an oxygen tank in the Apollo 13 service module happened near the end of Kranz’s shift, and he kicked off the initial mission control response, working tirelessly throughout the flight.

But it fell to Lunney’s “Black Flight” team of controllers on the next shift to come up with a way to use the crew’s lunar module as a lifeboat to keep the astronauts alive long enough to loop around the moon and get back to Earth. 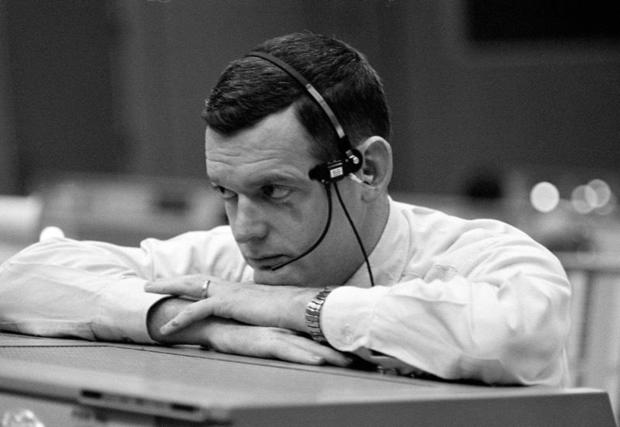 Ken Mattingly originally was named to the Apollo 13 crew but was removed at the last minute after exposure to German measles. He was replaced by backup command module pilot Jack Swigert, who blasted off April 11, 1970 on NASA’s third lunar landing mission along with Apollo 13 commander Jim Lovell and Fred Haise.

Fifty five hours and 55 minutes after launch, oxygen tank No. 2 exploded, causing tank No. 1 to fail as well. “Houston, we’ve had a problem,” Lovell famously called down to mission control. Within minutes, the spacecraft lost most of its oxygen and its ability to generate electricity. The crew was about 200,000 miles from Earth.

In an interview with Andrew Chaikin, author of Voices from the Moon, Mattingly recalled the impact of Lunney in the immediate aftermath of the explosion, before the flight controllers knew what had happened or whether they could save the crew.

“Nobody knew what the hell was going on,” Mattingly recalled in Chaikin’s account. “And Glynn walked in, took over this mess. And he just brought calm to the situation. I’ve never seen such an extraordinary example of leadership in my entire career. Absolutely magnificent. No general or admiral in wartime could ever be more magnificent than Glynn was that night. He and he alone brought all of the scared people together.”

He said Lunney was able to restore the team’s confidence, telling them their first job was to figure out what happened, what options were available and then “we’ll just get on with this thing.”

“Glynn walked in there, and he just kind of took charge,” Mattingly said. “At that point, nobody would even think of saying anything about disasters … it’s just professionalism at its finest. That was all exclusively caused by one Glynn Lunney. Absolutely the most magnificent performance I’ve ever watched.”

In a NASA oral history, Lunney put it like this:

“I felt that the Black Team shift immediately after the explosion and for the next 14 hours was the best piece of operations work I ever did or could hope to do. It posed a continuous demand for the best decisions often without hard data and mostly on the basis of judgment, in the face of the most severe in-flight emergency faced thus far in manned space flight. There might have been a ‘better’ solution, but it still is not apparent what it would be. Perhaps, we could have been a little quicker at times but we were consciously deliberate.”

Lunney received the Presidential Medal of Freedom as part of the Apollo 13 flight control team.

Born November 27, 1936, in Old Forge, Pennsylvania, Lunney grew up fascinated with flight and decided to study aeronautics at the University of Detroit. He graduated in 1958 and went to work for the National Advisory Committee for Aeronautics, the agency that became NASA in October of that year. 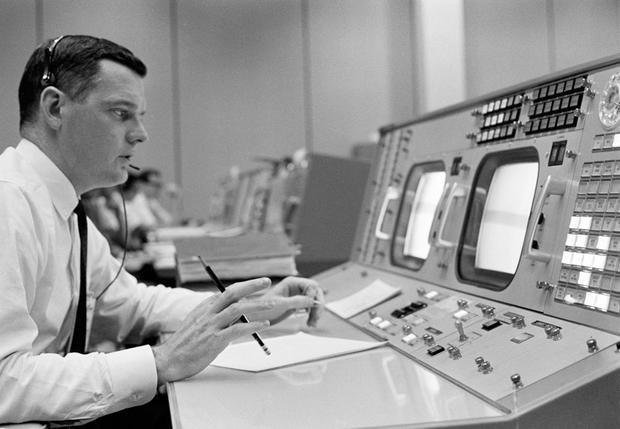 “He said those rules were like ‘a code of ethics’ for mission control,” Chaikin said in an email. “Just a beautiful phrase. I always found him to be extremely balanced in his view of things, but also very forthright. And he talked with great reverence about the culture that his bosses, Chris Kraft and [center director] Bob Gilruth, created during the early years of NASA, that ultimately helped get Apollo to the moon. But Glynn was the embodiment of that culture.”

Lunney would go on to serve as chief of the flight director’s office, manager of the space shuttle program and, after retiring from NASA, chief executive officer of United Space Alliance, a partnership between Lockheed Martin and Boeing that operated the space shuttle under contract to NASA.

“He was generous with helping young engineers like me to become better,” Hale said. “The nation owes a debt of gratitude to him which hasn’t been recognized. We will all miss him.”

Lunney is survived by his wife Marilyn and four children. One son, Bryan, became NASA’s only second-generation flight director.