With the Puppy Bowl coming up in less than a month, (I know, it’s pretty hard to believe), I’ve been feeling — well — a little bit antsy, to say the least. Not only am I anticipating a riveting and undeniably adorable game, but also, Grounds & Hounds Coffee’s Puppy Bowl Blend x Animal Planet is here to help fuel me for the cutest competition in all of sports. The new coffee blend sounds like it is absolutely delicious, and it also does some good for every bag you buy.

Now that there’s an official Puppy Bowl Coffee Blend, it’s practically all I want to drink. According to a press release sent to Elite Daily, on Wednesday, Jan. 2, Grounds & Hounds Coffee Company announced its collaboration with Animal Planet, to, once again, create the Puppy Bowl Blend (the companies also partnered in 2018). This year’s version combines coffee beans from Guatemala and Papua New Guinea, and altogether, it tastes like sweet molasses and ripe red berries, with subtle hints of milk chocolate and toasted vanilla, per the release. Yum.

Aside from the fact that it’s absolutely delicious, an entire 50 percent of all profits made from the Puppy Bowl Blend is going towards funding the transfer of high risk shelter pups to foster organizations. And honestly, if that isn’t an obvious reason to buy a 12-ounce bag off Grounds & Hounds’ website for $14.99, I seriously don’t know what would be. It’s limited-release, though, so you’ll have to be quick about it. Elite Daily reached out to Grounds & Hounds regarding how long the blend will be available, but did not hear back at the time of publication. 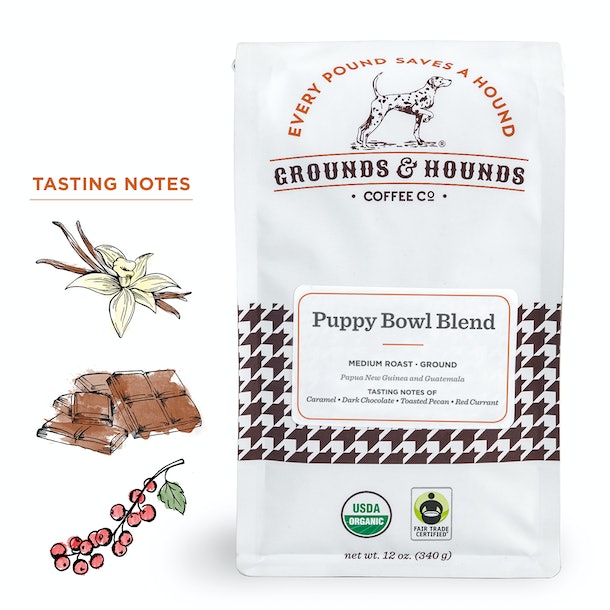 In a press release, Grounds & Hounds’ Founder, Jordan Karcher, said his company not only aims to create delicious coffee blends, but it also focuses on racking up support for any and all doggos in need. And since the point of Animal Planet’s Puppy Bowl is — in fact — to promote adoption (as opposed to buying a pup from a breeder or pet store), they figured it would be a super solid opportunity to collaborate.

In the press release, Karcher said:

If you haven’t already heard about Grounds & Hounds Coffee Company before today, it’s definitely making its way up there as one of my all-time favorite coffee brands. Even when the brand isn’t collaborating with Animal Planet (as this isn’t the first time they’ve offered a Puppy Bowl Blend) it donates 20 percent of all proceeds to fund pup-related causes, like shelter subsidies and microchipping. They also offer an entire line of 100 percent Fair Trade and Organic coffees, so it goes without saying that’s a win in my book.

If you’re finding yourself already getting stoked for the nation’s cutest game, the Puppy Bowl will air on Sunday, Feb. 3 at 3 p.m. ET on Animal Planet. Prepare yourself, though, because it’s going to be a tail-wagging good time. I can hardly contain myself.

OK guys, Grounds & Hounds has definitely won my heart. It should come as no surprise that the Puppy Bowl Blend will be stocked on my pantry shelves for months to come, and since adopting isn’t in the cards for me yet, this is one of the many ways I feel like I’m making a difference (while simultaneously staying caffeinated) — perfect for making my own Puppuccino.