Health Minister Greg Hunt says it was appropriate for the head of the country’s vaccine taskforce to be the senior government official at Australia’s first formal meeting with Pfizer last year as Labor continues to accuse the government of being too slow to move on a deal.

Documents released under the Freedom of Information Act showed the minister himself did not take up an invitation from Pfizer to engage with senior executives in a first official, highly detailed meeting in early July. 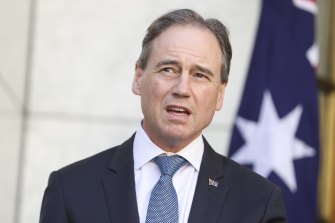 The Health Minister says the government was engaged from the early stages with Pfizer.Credit:Alex Ellinghausen

Labor leader Anthony Albanese said the emails between Pfizer and a senior Department of Health representative showed the government had been complacent about building a vaccine portfolio.

“The fact that Pfizer wrote to the government in June, it wrote twice, saying the Health Minister should meet with global executives from this pharmacy company to discuss how Australia can benefit from receiving these vaccines, shows that this government has been too slow,” he said on Thursday morning.

“The reason why we’re in lockdown today is because of the failure of the government on the vaccine rollout.”

In an interview on Nine’s Today show, Mr Hunt denied the government had been slow and said he and his office had been engaged with the pharmaceutical company from the early stages of the coronavirus pandemic.

“In February of last year, we commenced the program for vaccine research and searching for vaccines, engaged with Pfizer throughout – myself in May, my office in June. We actually did meet with Pfizer once they agreed to meet, and they did that at the end of June, my office met with them on 10 July,” he said on Thursday morning.

Asked why he did not meet with Pfizer personally, Mr Hunt said that was the job of the vaccine taskforce headed by Health Department assistant first secretary Lisa Schofield.

“What we created, to look across the world with over 100 different vaccine candidates, was a vaccine taskforce and scientific and technical advisory group led by [former chief medical officer and now Health Department secretary] Brendan Murphy and by one of the most senior people in the department,” Mr Hunt said.

“They worked right across all of these agreements – we were deeply engaged.“

Australia signed a deal with Pfizer for 10 million doses in November. The Commonwealth has since inked further deals with the company, for a total of 40 million doses this year, 60 million for next year and 25 million in 2023.

But the partially redacted documents, obtained by Labor, show Pfizer was keen to meet with the Health Minister and conduct a detailed meeting under the protection of signed confidential disclosure agreements.

Lawyers for the Commonwealth and Pfizer were still negotiating over the disclosure agreements as the United States and United Kingdom signed deals for a combined 130 million doses of Pfizer’s coronavirus vaccine in late July.

Mr Hunt also did not respond to questions about why it took a further four months from that first formal meeting for Australia and Pfizer to sign a deal. Instead, he said Australia received doses as soon as they were available. The first shipment from Pfizer arrived in February.

“It’s there in black and white that Pfizer was offering to do deals in June. Other countries were stepping up at that stage. And more than 30 companies had deals before Australia signed up in November,” he said.