One of the most striking live performances I saw last year was a gig by Boston-based Australian musician Stephen Byth. During a visit to Melbourne in early 2021, the saxophonist put together a superb local ensemble to play music from his debut album Reparations. 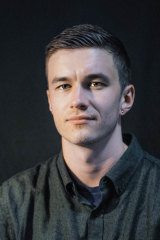 Back in Australia for an extended stay this summer, Byth has reconvened his antipodean octet for a handful of shows. Just over half the tunes at his concert on Sunday night were drawn from Reparations, and even though the band hadn’t played the material for a year, their grip on this intricate music has become even firmer and more nuanced. At times, the five-piece frontline (trumpet, two saxophones, trombone and clarinet) sounded more like a full big band, thanks to Byth’s canny arrangements and lush, full-bodied horn voicings.

This May Be Goodbye moved with the sombre majesty of a ceremonial procession, while Pain to Progress featured muscular solos (from Byth and trumpeter Niran Dasika) and shifting dynamics, underpinned by a rolling, syncopated beat flecked with the exuberance of ’60s soul-jazz.

The remainder of the show featured newer but equally persuasive compositions, often tinged with hints of mambo, samba and other Latin feels. The rhythm section (pianist Kade Brown, bassist Sam Anning and drummer Angus Mason) suggested rather than stated these rhythms overtly, but they gave the tunes an appealing buoyancy as the horns darted in unison spurts on Cutting Ties or dug into the Coltrane-inspired The Saint of Sound* with propulsive vigour.

Perhaps the most memorable of these new pieces was Freedom Isn’t Free, which opened with a piano ostinato and built a potent momentum, the melody and harmonies managing to convey both celebration and sorrow.

The Stephen Byth Octet performs at The Jazzlab on March 27.